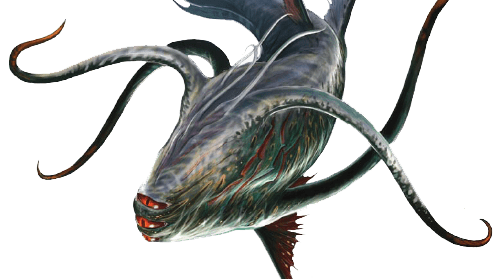 Welcome back to Dave’s Daily Fifth Edition Monsters! Today, I’ll be tackling the aboleth. Here’s what you can expect from this post:

Aboleths, the Horrors from the Depths

Aboleths. They’re totally gross, right? Basically big, psionic eels straight out of a Lovecraft short story. Not only are they scheming behind the scenes, sending out their minions to do all their dirty work, but they also have that body-horror ickiness that makes my skin crawl.

Hit someone with a tentacle and they turn into a fish person? Barf!

But I guess that’s why they’re such good Fifth Edition villains. Players don’t want to come anywhere near these things. Not that they ever should, mind you, if they’re played right. They’re smart, weird, and always five steps ahead.

The first variant, the aboleth fry, seemed a bit more obvious. Basically, a fry is a young version of an aboleth; a baby aboleth, if you will. It carries a lot of the same basic stuff as an aboleth, but loses its lair actions, legendary actions, and overall size. It’s basically to an aboleth what a dragon wyrmling is to a legendary dragon. However, what’s interesting about the fry is that it still has the same Intelligence and Wisdom as a full grown aboleth. The reasoning behind this is that aboleths have eternal memories. They pass on their knowledge and experience from generation to generation. So while the little bugger might not be as tough as mom or dad, it’s just as devious and alien as those that spawned it.

Next up is the lumwochaak. And man, did I have fun coming up with this thing. Basically, it’s a bigger, stronger, and meaner version of the basic aboleth. Yet still much different. Think of it as a rogue mutation of aboleths, something most aboleths try to destroy immediately. And instead of turning those it fights into goopy fish people, it seeks to impregnate a host with its larvae. Then, once the host “comes to term”, eel-like horrors crawl out of any available orifice.

Oh, and by the way, the host is still alive while this happens. And the host remains alive, spawning lumwochaak babies indefinitely as the lumwochaak and the spawn work to keep it alive.

After six months of feeding, the lumwochaak spawn grow into ugly, bald, speechless versions of the spawning host and act as minions for “daddy” lumwochaak.

The Lumwochaak was Inspired by Dyson Logos

If you haven’t already given it a read, I’ve been writing an adventure series on populating Dyson Logos’ amazing Dyson Mega-Delve. In The Flooded Tunnels map of the Mega-Delve there is a description given of a horrible monster, its strange bald servants, plus a whole mess of its toothy children:

A foul mastermind of a beast crawled in along the Lost River cave and into the mines and has settled into the chamber just north of the waterfall and source of the smaller river. From this location it has sent its minions out to collect materials and based on the genetic materials collected (from an unlucky adventurer) has birthed a collection of nearly identical human-seeming creatures under its control. As they don’t speak, they have been named “the brotherhood” by those other factions that have encountered them.

Also swimming the waters of this area are the true children of the mastermind beast. These little non-sentient monstrosities swarm in the water wherever they encounter food or blood. Any serious adventuring in this area will first require wiping out the thousands of these little toothy bastards, or keeping the whole party above the water at all times.

Thus, the lumwochaak and its children were born!

All of these aboleth variants are free for you to use in your own 5e campaign. Just not commercially. And the art isn’t mine. Borrowed!

Amphibious. The aboleth can breathe air and water.

Mucous Cloud. While underwater, the aboleth is surrounded by transformative mucus. A creature that touches the aboleth or that hits it with a melee attack within 5 feet of it must make a DC 11 Constitution saving throw. On a failure, the creature is diseased for 1d4 hours. The diseased creature can breathe only underwater.

Tentacle. Melee Weapon Attack: +5 to hit, reach 10 ft., one target. Hit: 6 (1d6 + 3) bludgeoning damage. If the target is a creature, it must succeed on a DC 11 Constitution saving throw or become diseased. The disease has no effect for 1 minute and can be removed by any magic that cures disease. After 1 minute, the diseased creature’s skin becomes translucent and slimy, the creature can’t regain hit points unless it is underwater, and the disease can be removed only by heal or another disease-curing spell of 6th level or higher. When the creature is outside a body of water, it takes 6 (1d12) acid damage every 10 minutes unless moisture is applied to the skin before 10 minutes have passed.

Lumwochaak lair in subterranean lakes. A lumwochaak spends most of its existence underwater, surfacing occasionally to treat with visitors or to create spawn.

When fighting inside its lair, a lumwochaak can invoke the ambient magic to take lair actions. On initiative count 20 (losing initiative ties), the lumwochaak takes a lair action to cause one of the following effects:

The region containing a lumwochaak’s lair is warped by the lumwochaak’s magic, which creates one or more of the following effects:

If the lumwochaak dies, the first two effects fade over the course of 3d10 days.

Amphibious. The lumwochaak can breathe air and water.

Luring Visage. Any humanoid or giant that can see the lumwochaak must succeed on a DC 15 Wisdom saving throw or be charmed. The lumwochaak can drop its appearance at any time. The visage ends if the lumwochaak is incapacitated.

A target that successfully saves is immune to the lumwochaak’s visage for the next 24 hours.

Kiss. Melee Weapon Attack: +12 to hit, reach 5 ft., one target. Hit: 17 (3d6 + 7) piercing damage and 27 (6d8) psychic damage. If the target is a creature, it must succeed on a DC 16 Constitution saving throw or be diseased and impregnated with lumwochaak larvae. The disease has no effect for 1 minute and can be removed by any magic that cures disease. After 1 minute, the diseased creature’s body becomes bulbous and bloated. The diseased creature can’t regain hit points, and its Dexterity decreases by 2 for every 24 hours that passes to a minimum of 1. If the disease reduces the target’s Dexterity to 1, the target becomes permanently incapacitated. Once permanently incapacitated, 1d4+1 swarms of lumwochaak spawn emerge from the creature every 24 hours. The disease can be removed only by heal or another disease-curing spell of 6th level or higher.

Vomit Spawn (1/day). The lumwochaak exhales a swarm of its spawn in a 15-foot cone. Each creature in that area must make a DC 20 Dexterity saving throw, taking 14 (4d6) bludgeoning damage on a failed save, or half as much damage on a successful one. Additionally, place 1d4 + 1 swarm of lumwochaak spawn in the affected area.

Whirl (Costs 2 actions). If the lumwochaak is in water, each creature also in the same body of water within 10 feet of the lumwochaak must succeed on a DC 19 saving throw or take (1d6 + 7) bludgeoning damage and be knocked prone. The lumwochaak can then swim up to half its swimming speed.

Amphibious. The swarm can breathe air and water.

A Small, Medium, or Large beast, giant, humanoid, or monstrosity can become a lumwochaak greater spawn. It keeps its statistics, except as follows.

Speed. The creature gains a swim speed of 30 ft.

Senses. The creature gains darkvision with a radius of 60 feet.

Languages. The creature understands Deep Speech and the same languages as its spawning host, but can’t speak.

New Action: Bite. The creature has a bite attack. The attack is a Melee Weapon Attack with a reach of 5 ft.  On a hit, the creature deals 1d10 piercing damage and the target is grappled. Until this grapple ends, the creature can’t bite another target.

Here the lumwochaak greater spawn template has been applied to a goblin.

Amphibious. The spawn can breathe air and water.

Nimble Escape. The spawn can take the Disengage or Hide action as a bonus action on each of its turns.

Now in PDF format on Patreon

Get this PDF and Over 65+ More

Thumbnail art by Wizards of the Coast and Paizo Publishing.