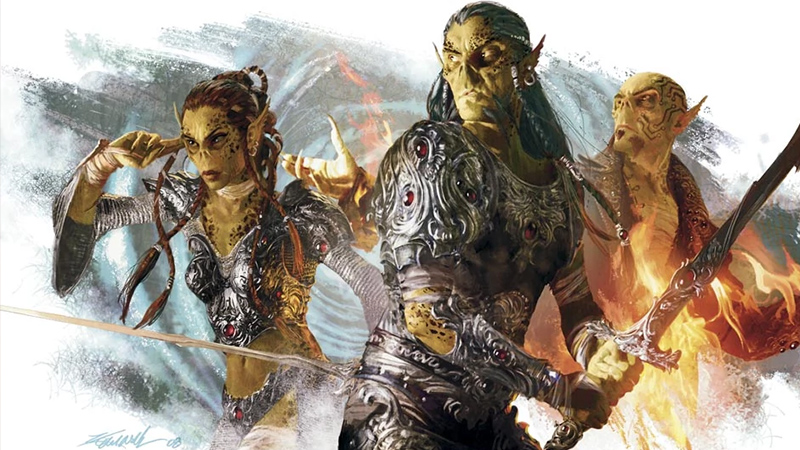 These monsters recently appeared in a Bloody Bunch adventure (my Saturday campaign).

Kruthiks are chitin-covered reptiles that hunt in packs and nest in sprawling subterranean warrens.

Keen Smell. The unit has advantage on Wisdom (Perception) checks that rely on smell.

Tunneler. The unit can burrow through solid rock at its full burrowing speed and leaves a 15-foot-diameter tunnel in its wake.

The bellicose githyanki terrorize the Astral Plane, raiding into other worlds to plunder the multiverse of its magic and riches.

Gith that train together form deadly units known as mirt’hiet (death squads). These death squads use their psionics and martial prowess with deadly efficiency.

Nondetection. The unit cannot be detected with any divination magic or perceived through magical scrying sensors.

Teleport. The unit magically teleports, along with any equipment it is wearing and carrying, to an unoccupied space it can see within 30 feet of it.

Focused philosophers and austere ascetics, the githzerai pursue lives of rigid order. Lean and muscular, they wear unadorned clothing free of ornamentation, keeping their own council and trusting few creatures outside of their own kind.

Improved Psychic Defense. While the githzerai is wearing no armor and wielding no shield, its AC equals 15 + its Dexterity modifier + its Wisdom modifier. In addition, the unit takes no damage from magic missile.

Gravity’s Ally. The unit’s falling rate of descent is 60 feet per round and its jumping distance is tripled.

The unit can take 1 legendary action, choosing from the options below, which it uses at the end of another creature’s turn. The unit regains spent legendary actions at the start of its turn.