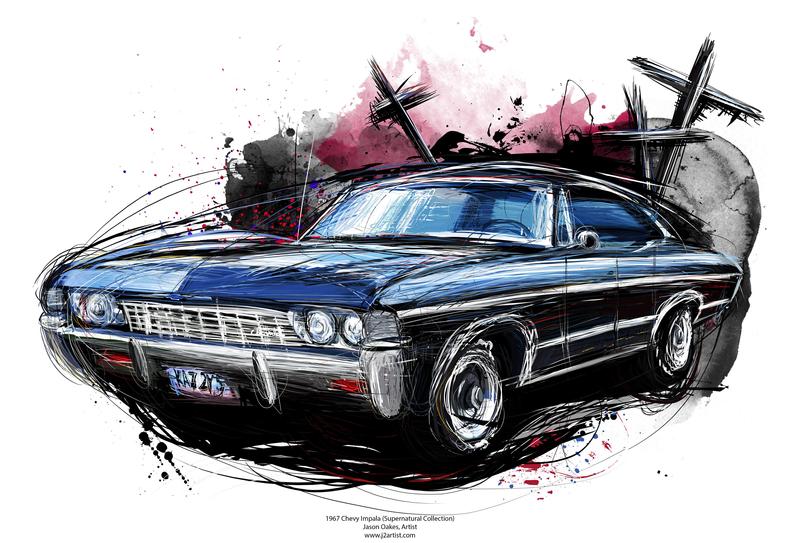 No monster hunting squad is complete without a flashy set of wheels (a, uh… “chariot” if you will) to get around in. Some might say that the vehicle identified below has a bit of a supernatural vibe to it. Regardless, many expert monster hunters see it as their “baby.” After all, they use this old roadster to track their quarry, store their gear, and sometimes even crash in it–literally and figuratively.

Equipment and Options. The flashy monster-hunting car can be equipped with improvements like magical incantations and additional armaments to help its crew members better track monsters. Windows all around the vehicle allow characters inside it to make ranged and magical attacks from within it.

On its turn, the flashy monster-hunting car can take 1 action. It cannot take any actions if it has no crew.

Move. The flashy monster-hunting car can use its helm to move using its wheels. As part of its move, it can use its front bumper ram.

Move up to the speed of the car’s wheels, with one 90-degree turn. If the helm is destroyed, the flashy monster-hunting car can’t move.

The flashy monster-hunting car has advantage on all saving throws relating to crashing when it crashes into a creature or an object. Any damage it takes from the crash is applied to the front bumper ram rather than to the vehicle. These benefits don’t apply if another vehicle crashes into the car.

As the monster hunting squad gains ranks at each tier of play (beginning at level 1 and advancing when the average party level reaches level 5, 11, and 17), the flashy monster-hunting car gains new features and benefits to assist the monster hunters on their investigations.

As a rank 1 magic vehicle, the vehicle can double as a cozy resting place for the party. While in the car, anyone who regains hit points at the end of the short rest by spending one or more Hit Dice regains an extra 1d6 hit points.

Starting at rank 2, the car’s trunk takes on magical properties. The trunk functions as a bag of holding. In addition, the trunk’s lock improves. The DC to open the trunk using either a Strength check or a Dexterity check using thieves tools is 20. At rank 3, the DC increases to 24, and at rank 4 it increases to 28.

At rank 2, if the crew operating the vehicle performs a 45-minute ritual using maps and 50 gp in consumed material components, they can ensure safe travel for the crew and up to 5 passengers in the car. The car travels from its current location to a location it could normally reach within one day. Plus, the destination must be one to which it has traveled previously, or for which its crew has an accurate route or map.

Once the vehicle reaches rank 3, the vehicle’s ram attacks count as magical for the purpose of overcoming resistance and immunity to nonmagical attacks and damage. In addition, the interior and trunk of the car are infused with holy power. Celestials, elementals, fey, fiends, and undead can’t enter the vehicle, nor can such creatures charm, frighten, or possess creatures within it. Any creature charmed, frightened, or possessed by such a creature is no longer charmed, frightened, or possessed upon entering the vehicle. The vehicle’s crew can say a command word to exclude one or more of those types of creatures from this effect. Another command word cancels the exclusion.

Just the Right Tool for the Job

At rank 3, a character can use his or her action to reach into the car’s weapons trunk and make a DC 15 Charisma (Persuasion) check. On a success, the character draws forth an item of his or her choice on the Weapons or Adventuring Gear table in chapter 5 of the PHB. The item must be of a size that can fit into the trunk, worth no more than 15 gp. Once a character attempts to draw five items from the trunk, this vehicle’s property does not function again until the next dawn.

Beginning at rank 3, the crew member operating the vehicle can use a bonus action to enter the border regions of the Ethereal Plane. The vehicle and all its passengers remain in the Border Ethereal for up to 1 hour or until the operator uses another bonus action to dismiss the effect. During this time, the vehicle can move in any direction. If the vehicle moves up or down, every foot of movement costs an extra foot. The crew and passengers can see and hear the plane they originated from, but everything there looks gray, and they can’t see anything more than 60 feet away.

This feature has no effect if the vehicle is on the Ethereal Plane or a plane that doesn’t border it, such as one of the Outer Planes.

Once this vehicle’s property is used, it can’t be used again until sunset, seven days later.

Just the Right Weapon for the Job

Also at rank 4, when a creature uses the vehicle’s Just the Right Tool for the Job feature to draw a weapon from the weapons trunk, the weapon is a magic weapon with a +1 bonus to attack rolls and damage rolls. After 1 hour, the weapon loses its magic and reverts to a nonmagical weapon. Ω

Art by Jason Oakes on Etsy.