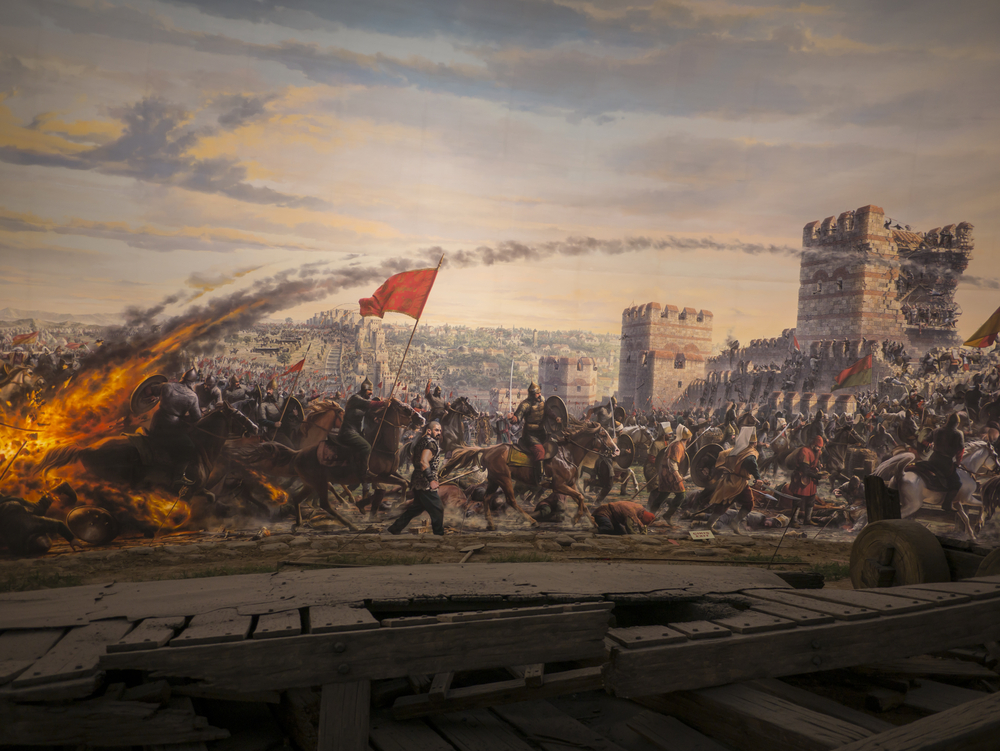 The Battle of Dragard Mine introduces new rules for mass combat in Fifth Edition. These rules can be added into your game with very little modification on your part.

The system itself doesn’t change how combat works with the exception of adding in two new actions, commands and rally. The Command action allows leaders (described below) to use their action to direct units in combat and the Rally action allows a leader to stop broken units from fleeing.

Morale, an optional rule in Fifth Edition, is also implemented in this system to add a necessary dynamic to large scale battles.

In addition to commands and morale, the system introduces units, which act similar to the same way that swarms do with a few additional mechanics. Units make it easier for the GM to manage multiple enemies and NPCs at once.

A leader is any non-unit creature that can command a unit. Typically, leaders are the players’ characters plus any important NPCs that the GM has deemed worthy of leading. A leader can join a unit by moving into the same space as the unit. Once the leader joins a unit, it cannot move or take actions of its own unless it chooses to remove itself from the unit by moving out of the unit’s space. However, it can move the unit and have the unit take actions on the leader’s initiative count without the unit counting towards the total number of units that it can command. The unit uses the leader’s Wisdom saving throw for morale checks in place of its own. A leader that is part of a unit cannot be directly targeted by attacks, spells, or other effects that target one target or one creature.

A unit is a single, cohesive group of soldiers or monsters comprised of 5-10 creatures of Large size or smaller. Units function similarly to swarms in that they move and attack as one, and are immune to conditions that would otherwise affect an individual creature. If a unit is hit by an area of effect spell or effect that completely envelops the unit, such as a fireball spell or a white dragon’s ice breath, the unit takes double the normal damage if it has more than half its hit points remaining. In addition, a unit that has more than half of its hit points that misses a creature with a melee attack still deals half damage against the target.

A unit obeys the commands of a leader as best as it can. It takes its turn on its leader’s initiative, though it does not move or take an action unless commanded to (see Commands below). On its turn, a leader can verbally command the unit where to move (no action required by the leader). A leader can use its action to command it to take the Attack, Dash, Disengage, Dodge, or Help action. Once a unit follows the commands of one leader it cannot be commanded again until the next round begins.

In the absence of commands, the unit acts on its own, focusing on protecting itself. The unit never requires a leader’s command to use its reaction, such as when making an opportunity attack.

Optional Rule. If you are using flanking rules in your game, you may give a unit advantage on melee attacks that it makes against creatures in the same space as the unit.

The two actions described below are available to leaders to use during combat in addition to those normally offered.

In combat, a character or leader NPC can use its action to command a number of units equal to its proficiency bonus within 30 feet of it. With this action, the leader commands the unit to take the Attack, Dash, Disengage, Dodge, or Help action.

When a unit flees due to a failed morale check (see Morale below), a leader can use its action to Rally the unit. The unit makes another DC 10 Wisdom saving throw but adds the leader’s Charisma modifier to the saving throw.

Units might run away when a fight turns against them.  The following circumstances trigger a morale check for units:

To determine whether the unit flees, make a DC 10 Wisdom saving throw for the unit or the unit’s leader. On a failed save, the unit flees by the most expeditious route, using the Dash action if possible, at the end of each round of combat. If escape is impossible, the unit surrenders. If a unit that surrenders is attacked by its conquerors, the battle might resume, and it’s unlikely that further attempts to flee or surrender will be made.

A leader can use the Rally action to force a unit to make another DC 10 Wisdom saving throw.

Optional Rule. If a unit flees from the edge of the map or battlefield, the unit is considered “destroyed” and cannot be rallied.

The following units are examples of common units in the mass combat system.

Unit. The unit can occupy a Medium or smaller creature’s space and vice versa, and the unit can move through any opening large enough for a Medium human. If the unit is targeted by an area of effect spell or effect that completely encloses the unit and the unit has more than half its hit points remaining, the unit takes double damage from the effect. The unit can’t regain hit points or gain temporary hit points.

Unit. The unit can occupy a Medium or smaller creature’s space and vice versa, and the unit can move through any opening large enough for a Medium zombie. If the unit is targeted by an area of effect spell or effect that completely encloses the unit and the unit has more than half its hit points remaining, the unit takes double damage from the effect. The unit can’t regain hit points or gain temporary hit points.

Undead Fortitude. Whenever the zombie unit takes damage, it must make a Constitution saving throw with a DC of 5 + the damage taken, unless the damage is radiant or from a critical hit. On a success, the unit does not take damage.

Rend. If a Medium or smaller creature ends its turn in the same space as the zombie unit, the zombie unit can use its reaction to make a slams attack against the creature.

If your campaign focuses heavily only on battles and wars, you may wish to include new options for characters. These feat options are available to characters if you are using the optional feat rules.

When a unit that you are a part of uses its action to Dash, the unit can use its bonus action to make one melee weapon attack. If the unit moves at least 10 feet in a straight line immediately before taking this bonus action and the attack hits, the unit scores a critical hit against the target.

You have the ability to inspire and lead great throngs of soldiers into combat. You gain the following benefits:

When you are mounted and part of a mounted unit, you and the unit gain the following advantages: