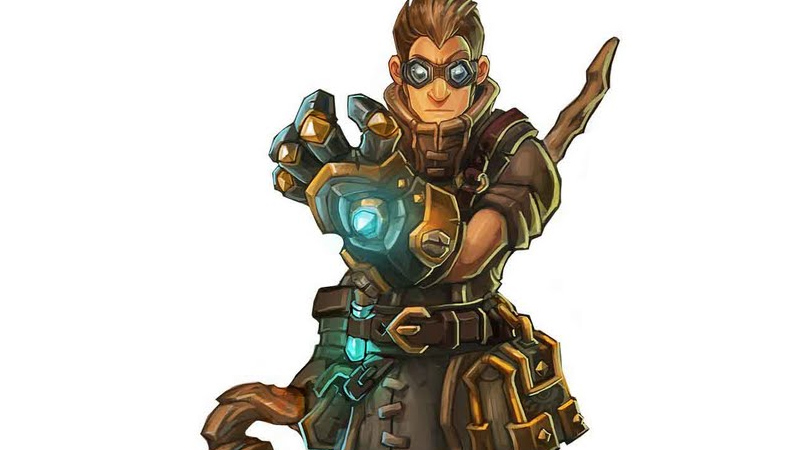 Moving through my Patron requests for July, this one comes from a user I only know as “cmac”:

Hi Dave, I am a Electrum Club member and I have a request for magical item. I call it the “Gnomish Haymaker” it’s a magic gauntlet that requires attuning by a member of a small race. Here is a 1st attempt on my own but it needs work. I wanted a minor penalty for using it but all I could come up with was disadvantage on attack rolls which slows things down too much…. Attacks deals 1d4 bludgeoning damage plus 1d6 additional force damage in the form of a pressurized air blast. On a hit, you can use your bonus action to force the target to make a DC 15 saving throwing, creatures that are large and above have advantage on the save . On a failure, the target is pushed back 10 feet. In addition, the wielder may use their INT modifier instead of STR modifier for attacks made with this weapon. However, it is unwieldy and. heavy which causes disadvantage on attack rolls. While wearing the gauntlet no other item or weapon can be used in this hand.

Interesting! Let’s break this all down real quick.

It’s definitely a neat concept, but I fear a little underpowered.

For starters, the weapon deals an average of 6 damage (plus mod) on a hit, 2.5 of which is bludgeoning and 3.5 is force. Granted, it’s magical, but compare it to something like the greatsword which does an average of 7 damage on a hit, and it’s sort of basic. The only thing it has going for it is the force damage which is tough to overcome with resistances and immunities.

To put it in perspective, if the user used a mundane dagger with a +3 damage bonus, they would deal more damage. It wouldn’t be magical, and there’s not a chance for pushback, but ultimately we’re talking about a common magic weapon. And since it requires attunement, it’s unlikely anyone will use it, favoring something that packs a little more punch (no pun intended.)

Here’s what I suggest for an uncommon magic item build:

This bulky, mechanical glove is covered in gears, steam pipes, and other gizmos. While you wear the glove and are attuned to it, you gain the following benefits:

I’ve amped up the damage a bit putting it in the realm of what’s possible with an uncommon magic item. Now, you only get the disadvantage on attack rolls if you use the extra force damage property.

All Patrons get requests on DMDave’s Patreon. Plus, you get PDFs, previews for BroadSword Monthly, and a whole lot more.

Put in your request today!

Note: couldn’t find the name of the artist for this work. If you know who it is, let me know down in the comments. Thanks!