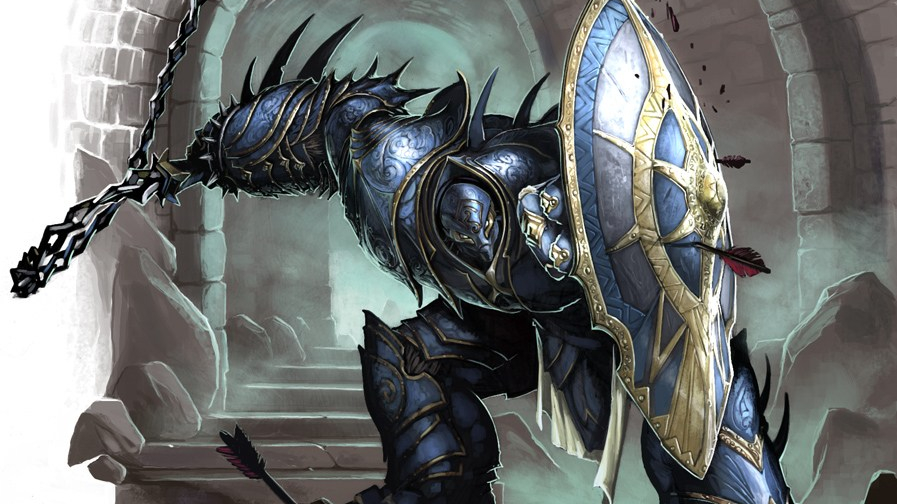 Basically, this allows a player to take a shield guardian as their sidekick. Here are a few considerations first:

What qualifies as a sidekick?

Now that we understand the basic rules for sidekicks, we need to do a little reverse engineering of the shield guardian stat block to get it down to CR 1. I took a few notes from the “mini shield guardian” (aka animated suit of armor) and tweaked accordingly. I left in its spell storing feature but nerfed its regeneration (way too powerful for a playable class/race). Plus, it still has its shield feature.

Here is what I came up with:

Languages understands commands given in any language but can’t speak

Spell Storing. A spellcaster who wears the shield guardian’s amulet can cause the guardian to store one spell of 4th level or lower. To do so, the wearer must cast the spell on the guardian. The spell has no effect but is stored within the guardian. When commanded to do so by the wearer or when the situation arises that was predefined by the spellcaster, the guardian casts the stored spell with any parameters set by the original caster, requiring no components. The stored spell remains for 24 hours or until it is cast or a new spell is stored.

Also shield guardians have a constructed nature, meaning that they do not require air, food, drink, or sleep.

Because the shield guardian can’t speak, it can only take the warrior class option. In addition, I recommend you add in the following class feature at 1st level:

At 1st level, the sidekick has built-in protective layers which determine its Armor
Class. It gains no benefit from wearing armor, but if it is using a shield, it applies its bonus as normal. While wearing no armor, its Armor Class equals 16.

I created this for my wizard player who’s been pining for a shield guardian for a while. Hopefully, he likes it! If not, I’m going to toss him down a well. Because I’m an evil Dungeon Master.