10 Ways to Bring Realism Into Your Campaign 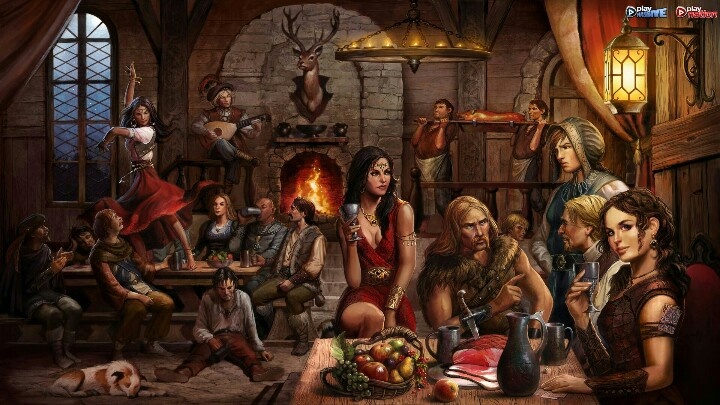 If you’re looking to infuse your sessions with a touch more realism or authenticity, you’re in the right place. Adding realism to a session can give players something to really cling to and can inspire creativity and memorable table banter. It can also challenge players looking to really get into their character’s head and the world around them.

Here are ten ways to bring realism into your campaign:

Now everyone has to speak the same language or the same dialect. While there are language mechanics in most role-playing games, it’s also possible to have more subtle barriers in the form of hard-to-understand accents or infections. Areas far apart or isolated from one another might use different words for the same things. These small details can bring about some really fun role-playing opportunities.

You can’t ready twenty pages in a George RR Martin novel without reading about food. It’s a great touch that helps people experience the flavors of the world, even if only in their heads. Knowing what a culture eats tells you something about that culture and it speaks to what the local crops are. In the end, cuisine is a small detail that can speak volumes.

I split out Alcohol from #2 Cuisine because you can have a lot of fun with this. Alcohol can include culture-specific ales (Dwarven Ale, Orcish Grog, etc.), fine wines (Elven Wine, Half-Elven Winter Wine), and liquors (Tiefling Firewater, etc.). You can use preferred cocktails as a way to give clues as to where a character is from or has been. And a nice one-shot can revolve around a night drinking or even delivery a shipment of ale elsewhere.

It’s pretty common to describe the way a street, pub, or spooky forest looks, but don’t forget how they sound! Mentioning the loud bustle of a busy street or utter silence of a dark glen brings detail that helps players role play more effectively. Describing the music that’s playing in a tavern or the chiming of monks in the distance can also add details that turn a generic village into a distinct culture.

Smells of all types can help the immersion of your session. Talking about the way food smells is great, but it’s also the bad odors that go a long way. A subtly stale smell can send players off on a question to discover where it originates and you can have a lot of fun having them use their nose to smell what’s “fishy.”

This is a big one. Nothing slaps you in the face with realism like reminding players that a cultural or racial hangup can cause problems in character. This is classically done by having areas where the inhabitants don’t like certain races or certain factions. Having cultural or racial injustices and insensitivity in a campaign can also give players something to overcome that can’t always be solved with a sword or sorcery. Don’t forget, it’s also completely possible to celebrate cultural and racial differences instead of using them as tools for conflict. Walking into a village where humans celebrate dwarven holiday traditions can be a fun way to differentiate areas and give players something to think about.

Talk about what’s on the coins in an area. What coins are stamped with or made of can speak to the culture, government, and available metals in an area. But don’t stop there! Introduce exchange rates as a barrier for trade that players will have to consider when they visit new places.

Everyone is familiar with conditions player characters can receive, but how often does a character have a cold, fever, or twisted ankle that affects their role playing? Not often enough! Aches and pains are a part of life, even more fantasy characters. Revel in having a character wake up with a minor illness or have them suffer back pains after lifting something heavy. Strep throat for characters can be a great deterrent for disruptive players as well, ha.

The next time your party walks into a village have them preparing for a holiday festival, townwide state of mourning, or anniversary party. It can create a fresh and new environment that also speaks volumes to the local culture, their religion, and sense of community.

I’ve been playing D&D regularly since 3rd edition with a host of different DMs and I’ve noticed something: the weather is always sunny, sometimes cold, but rarely anything else. Windy weather can affect arrows. Rain affects several things while traveling. Snow is popular, but ice is even more treacherous. Oh, and then there’s hot, muggy weather where players have to take off their armor just to be able to walk without passing out. Have fun with it.

Whatever you choose to include or not include in your session, the more details you give your players the more realism and authenticity you’re going to infuse the story with. Have fun with it and give your party details to remember.

Bryan Fischer has been designing games, writing content,  and running successful Kickstarters for a long time. He focuses on player experience and has many more tips and tricks up his sleeve. Follow Bryan on Instagram @bryanbfischer.

1 thought on “10 Ways to Bring Realism Into Your Campaign”