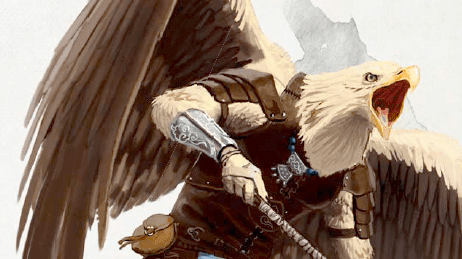 Hello! And welcome to the first episode of Dungeon Master Dave’s Daily Dungeons & Dragons Monsters (I guess I could write that as DMDDNDM… yeesh). Each day I’m going to cover one of the monsters from the Dungeon & Dragons 5e Monster Manual and offer up some cool variants to flesh them out a little. First up, I’m covering the high-flying race of bird men, aarakocra.

I’ve never used aarakocra in my campaigns. So it was neat to learn a little more about them and come up with some relevant variations. Judging by the fluff, they come off as a spiritual, noble race of humanoids, kinda like native Americans, especially from Central and South America, mixed with paladins. They’re neutral good, so they make sure to fight evil anywhere and everywhere the find it. Plus, they have a bit of a “vision quest” edge to them, too, as the toughest aarakocra warriors are selected to seek out the Rod of Seven Pieces, a mythical artifact from their past.

Statwise, they’ve got average Strength and Con, but above-average Dexterity, so they’re definitely snipers. They will rarely, if ever attack close up, and always try to use their flight to their advantage. They have pretty low AC, too, and don’t seem too fond of wearing armor as it would probably hinder their mobility. So 9 times out of 10 they will use their javelins to make attacks and only fight with their talons or use their javelins at close range if they’re cornered or battling another flying opponent. Of course, this puts a damper on their dive attack since they’re way too squishy to dare get that close.

Hence, when I came up with variations I wanted to include a few aarakocra that could actually use their dive attack without fear of reprisal in the form of attacks of opportunity.

The three variations I have today (with three more to come tomorrow, I hope) are the aarakocra chief, hurucan and seeker of the rod.

The aarakocra chief is the eldest member of his or her aarakocra tribe and generally faster and wiser than the younger warrior flock. The chief’s flying V-formation allows it to rally the other aarakocran warriors and attack as a unit rather than spontaneous dives. Plus, the chief’s got a bit more power behind its own dive attack.

One of the deadlier members of an aarakocran tribe is the skilled aarakocra huracan. The huracan is a hit-and-run attacker, using its superior speed, multi-attack, and fly by feature to strike fast and get out faster. Plus, its sharper-than-normal talons will easily tear through any who oppose it.

Finally, we have the aarakocra seeker of the rod. Certain aarakocran warriors of great speed, wisdom, and natural leadership ability are selected to quest for the Rod of Seven Pieces. This is seen as one of the highest honors among the aarakocra. In addition to its inherent paladin-like traits, the seeker of the rod also carries the powerful Thunder Bow, a weapon blessed by the vaati themselves and capable of wiping out entire units with a single arrow.

All of these aarakocra variants are free for you to use in your own 5e campaign. Just not commercially. And the art isn’t mine. Borrowed!

Dive Attack. If the aarakocra is flying and dives at least 30 feet straight toward a target and then hits it with a melee weapon attack, the attack deals an extra 7 (2d6) damage to the target.

Multiattack. The aarakocra makes two attacks, either with its talon or its javelin.

Flying V-Formation (Recharges after a Short or Long Rest). For 1 minute, the aarakocra can utter a special command whenever a nonhostile creature that it can see uses the Dive attack trait and can hear the aarakocra. That creature makes its attack roll at advantage.

Dive Attack. If the aarakocra is flying and dives at least 30 feet straight toward a target and then hits it with a melee weapon attack, the attack deals an extra 7 (2d6) damage to the target.

Flyby. The aarakocra can take the Disengage or Dodge action as a bonus action on each of its turns.

Aarakocra Seeker of the Rod

Dive Attack. If the aarakocra is flying and dives at least 30 feet straight toward a target and then hits it with a melee weapon attack, the attack deals an extra 10 (3d6) damage to the target.

Brave. The aarakocra has advantage on saving throws against being frightened.

Innate Spellcasting. The aarakocra’s spellcasting ability is Charisma (spell save DC 12). It can innately cast the following spells, requiring no material components:

Thunder Bow. Ranged Weapon Attack: +6 to hit, range 150/600 ft., one target. Hit: 6 (1d8 + 4) piercing damage. Additionally, each creature in a 15-feet cube centered on the target must make a DC 12 Constitution saving throw regardless if the attack hit or not. On a failed save, a creature takes 9 (2d8) thunder damage and is pushed 10 feet away from the target. On a successful save, the creature takes half as much damage and isn’t pushed.

In addition, unsecured objects that are completely within the area of effect are automatically pushed 10 feet away from the target by the attack’s effect, and the attack emits a thunderous boom audible out to 300 feet.