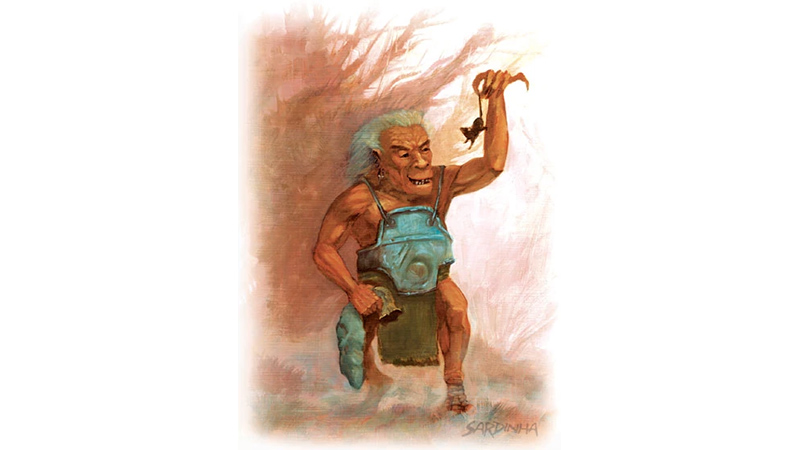 Living deep in cursed forests, bajangs grow in tree trunks like pustules of evil, emerging to terrorize nearby settlements.

Evil nature spirits found in corrupted tropical jungles, bajangs are typically encountered near the site of a bloody battle, the burial place of an evil wu jen, or the secret meeting place of an evil cult.

They look like stunted, stocky humans (averaging 3 feet tall, 120 pounds) with blunt noses, wispy hair, and pale brown skin. Their eyes are beady and orange, and their wide lipless mouths are permanently creased in evil sneers. Their hands are bony claws and their feet resemble the talons of a vulture.

Bajangs are vicious and devious fighters, preferring weak or helpless prey. They prefer to attack sleeping victims or ambush single creatures from behind.

Shapechanger. The bajang can use its action to polymorph into a wildcat with light brown fur and orange eyes, or back into its true form. Its statistics are the same in each form. Anything it is wearing transforms with it, but nothing it is carrying does. It reverts back to its true form if it dies.

Magic Resistance. The bajang has advantage on saving throw against spells and other magical effects.

Tree Symbiosis. A bajang’s lifeforce is tied to a single tree in the forest where it dwells. If the tree is destroyed (chopped down, burned, or rotted with magic) the bajang dies immediately.

Claw. Melee Weapon Attack: +4 to hit, reach 5 ft., one target. Hit: 4 (1d4 + 2) slashing damage. If the target is a creature it must succeed on a DC 12 Constitution saving throw or become poisoned for 1 hour. A creature can repeat the saving throw at the end of each of its turns, ending the effect on itself on a success.

Steam Breath (Recharge 5-6). The bajang exhales scalding steam in a 30-foot cone. Each creature in the area must make a DC 12 Dexterity saving throw, taking 10 (3d6) damage on a failed save, or half as much damage on a successful one.