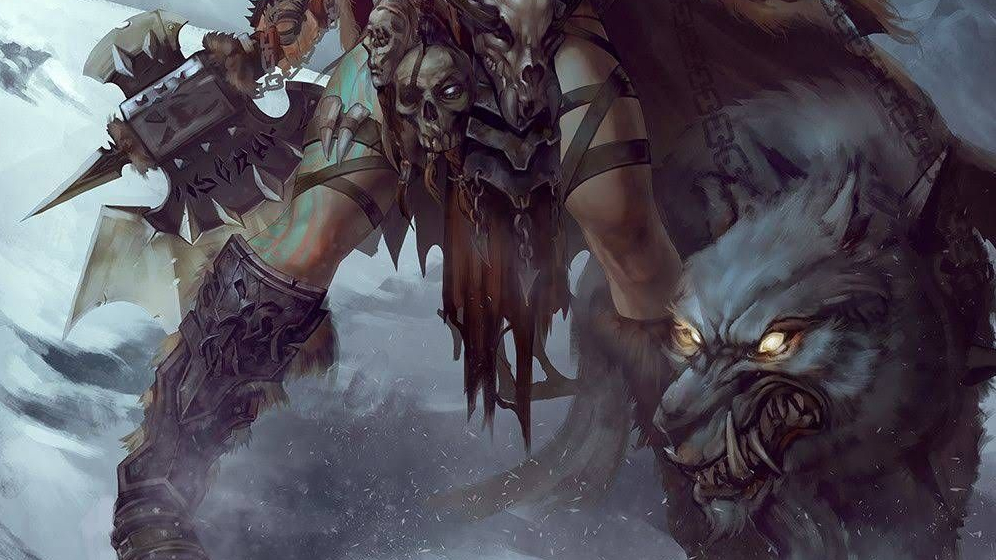 This entry comes as a Patron request and will be a part of DMDave Magazine #1 released sometime at the end of March/early April.

Here is the original request:

Barbarian pact leader. Kinda like the ranger beast conclave, but make it feel less like your taming the animal but ur working with a pack mate

So what’s a barbarian? A tank. DPR. Crowd control. And that’s about it, right? There are a few versions that have buffs, but more or less their job is to take the hits and hit the thing that gave the hits. So, throwing in a pet changes the dynamics some.

The biggest consideration I had to make while creating this subclass was nerfing the beast companion so that it only worked when raging (which I hated doing).

Otherwise, it would have been too powerful. Rangers can get away with it because their baseline powers are kinda bleh. But with the beast companion, they get a little juice.

Of course, once the barbarian gets its Extra Attack, its beast companion operates on its own and all is right in the world.

You get a choice at 10th level for your power–obviously many will see a lot of synergy with the pack tactics power and the 14th capstone, but the others are nice, too, especially for those folks who like to go crit fishing.

The 14th-level capstone is probably going to be the most controversial. Mathematically speaking, the joint attack allows you to deal an average of ~3 more damage on a hit since it’s basically the same as rolling advantage on both your attacks. Still, this should work out to about the same that the other reaction-based barbarian capstones would. Plus, it only works if you’re animal companion is standing. At 14th level, they’ve got 56 hit points, far less than the 160+ your barbarian is going to have at the same level and none of your good saves.

Let me know what you think down in the comments below.

Edit: made a bunch of correction thanks to some sharp minds over on reddit that noticed some boo-boos. Thanks, folks!

At 3rd level, a barbarian gains the Primal Path feature. The following Pack Leader option is available to a barbarian, in addition to those normally offered.

Having a strong connection to nature, barbarians are often around animals. Of course, many barbarians take on the aspects of those animals as their totem. There are some, though, who believe that nature and man should still remain separate, yet equal. These followers of the primal path of the pack leader walk alongside animals, encouraging their companions to work alongside them, but always with free will.

At 3rd level, you gain a beast companion that accompanies you on your adventures and is triggered to fight alongside you while you are raging. Choose a beast that is no larger than Medium that has a challenge rating of 1/4 or lower (appendix D of the PHB presents statistics for the hawk, panther, and wolf as examples). Add your proficiency bonus to the beast’s AC, attack rolls, and damage rolls, as well as to any saving throws and skills it is proficient in. Its hit point maximum equals the hit point number in its stat block or four times your barbarian level, whichever is higher. Like any creature, it can spend Hit Dice during a short rest to regain hit points.

If you are incapacitated or absent, the beast acts on its own, focusing on protecting you and itself. The beast never requires your command to use its reaction, such as when making an opportunity attack.

If the beast dies, you can obtain a new companion by spending 8 hours magically bonding with a beast that isn’t hostile to you and that meets the requirements.

At 10th level, you and your beast have trained extensively to work as one cohesive unit. You gain one of the following features of your choice.

Improved Critical. Your beast companion’s weapon attacks score a critical hit on a roll of 19 or 20.

Pack Tactics. Your beast companion has advantage on attack rolls against a creature if you are within 5 feet of the creature and you aren’t incapacitated.

Protector. When a creature that your beast companion can see attacks a target other than it that is within 5 feet of it, it can use its reaction to impose disadvantage on the attack roll.

At 14th level, while you are raging, as long as you and your companion are within 5 feet of each other, you can make one weapon attack yourself when you command the beast to take the Help action. In addition, any hit you score against a creature while your beast is helping you is a critical hit.

If you haven’t heard, I’ve got a book out called EVIL. It’s 56 pages of new Fifth Edition subclasses, races, magic items, monsters, and more all in an easy-to-read PDF.

Get the book EVIL by DMDave, now!

Art by Tong Yan on Artstation.