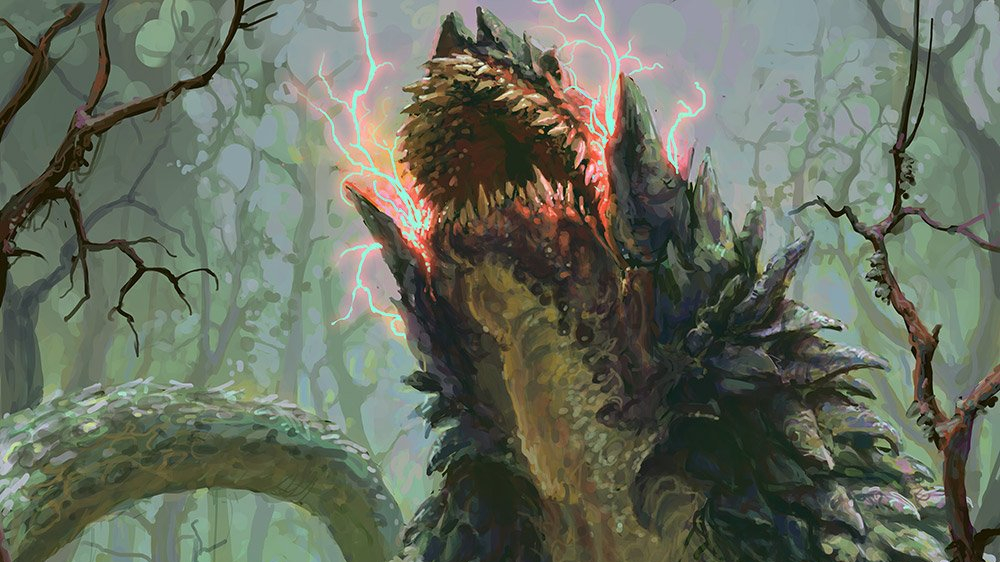 Everybody must get stoned! Sorry, that was my horrible Bob Dylan impression. Er, anyway, it’s time to cover basilisks.

Way, way back in 1991, TSR published The NEW Easy-to-Master Dungeons & Dragons boxed set. I was just 10 back then, but I was totally hooked by it. In the adventure that came with the box set, the narrative hook–the one that made it so your players ended up in Zanzer’s Dungeon–was the delivery of a basilisk to… someone. Long story short, someone gets bit, turns to stone, and wham-o: you’re in jail, bubba.

In D&D lore (at least in 5e), basilisks are portrayed as large lizards with eight legs. They aren’t terribly bright, but they’re pretty tough with a 16 and 15 in Strength and Constitution respectively. Of course, that’s not what really gets PC’s excited about basilisks. Its their petrifying gaze that strikes fear into the hearts of adventurers everywhere.

Anybody that starts their turn within 30 feet of these buggers and fails a Constitution check starts to turn to stone. Since the basilisk is a low-CR baddie, these can be quite the threat for a first-tier party, but pretty easy to avoid at later levels.

Basilisks come from European folklore. To the Greeks they were seen as the kings of serpents; hence the translation of their name “little king.” They weren’t terribly large, roughly the size of a small snake. However, they were so venomous that they left a trail of venom in their wake.

Oh yeah, and they hated the smell of weasels.

It’s strongly believed that Europeans that first made their way into Southern Asia a couple thousand years ago discovered King Cobras and their natural enemies the mongoose. Hence the “little king” who hates the odor of weasels story.

Also of note is how close the origin of the basilisk is to that of cockatrices. Historians believe that the two were probably once the same creature, and somehow the two’s paths diverged.

How do 5e basilisks fight?

Basilisks are pretty dumb (Intelligence 2) and not too wise (Wisdom 8). They’re unaligned monstrosities, which more or less means they just want to eat, sleep, and be left alone.

It would seem from the D&D fluff that basilisks uses their gaze not only for defense, but to solidify prey and eat it in that format.

In combat, a basilisk isn’t smart or wise enough to know whether or not a particular individual is more of a threat than another. However, it’s unlikely to challenge more than one or two attackers at a time unless it’s hungry and desperate. Some basilisks are captured at an early age and trained to avoid eye-to-eye contact with their masters. These basilisks might guard something important. I imagine that training something with such low intelligence probably results, at most, in “don’t let anybody come in here, Fido.” Then their trainers just plop them somewhere–probably a hallway bottle neck or small room–and hope they do their job.

Unless it can immediately turn all of its attackers to stone, chances are it will run away at the start of combat. They’re not super fast (only 20 ft. of movement per turn or 40 with a Dash), though, so they’ll continue to use their gaze until there’s no more trouble or that trouble is too frigthened by their power to pursue.

Finally, it will only use its powerful poisonous bite if cornered.

What 5e basilisk variants are needed?

Surprisingly, 5e basilisks are pretty close to their folklore counterparts. Bravo, the folks at Wizards!

When it comes to beasts and monstrosities, lesser and greater versions are always fun. I assume that the Monster Manual basilisk is a mama or a papa, so a baby would be fun. And since basilisks eggs are prized by trainers, I imagine baby basilisks aren’t too far behind in value either. Get ’em while they’re young!

Also, worth noting is that basilisks are not immune to petrification. That means adult basilisks probably abandon their young after laying their eggs out of fear of turning the younglings the stone or vice versa.

Of course, that really begs the question… how the hell do these things even mate?

Anyways, we’ll need a big basilisk, too. Something that can pose a challenge to higher level PCs. Fortunately, that’s as simple as knocking it up from Medium to Huge size and giving it a bigger Challenge Rating.

Finally, we need a fun variant, but I was having trouble coming up with something creative. Therefore, I decided to create a quick monster adjustments randomizer on paper. I’ll post how it works soon along with details on how I create quick monster variants. Anyways, what I came up with was a coral basilisk.

Doing a little research, I discovered baby snakes are called snakelets. Therefore, our baby basilisks will be basiliskets, which honestly, is a little redundant (in Greek “lisk” means little), but whatever. That’s for the etymologists to sort out. To add a little flavor to these little guys, I decided that they’re born without legs; those come later. They’re just bigger-than-normal snakes with a crested ridge. Oh, and they can still turn you to stone, too.

Next up, is the greater basilisk. The word basil literally means “king.” And in greek, “great” is mega. Therefore, we’ve got ourselves a megabasil. These are the alphas of the basilisks, the big, big ones. Huge in size with plenty of bite and a much deadlier stare than their smaller cousins.

Finally, I decided that the coral basilisk would be a basilisk that was happy both in and out of water. It would have a smoother appearance than its mountain counterparts, less ridgey, and probably have brighter colors to blend in with coral. Since it would be using its gaze underwater, it probably needed another effect. After all, evolution would probably tell us that a petrifying gaze wouldn’t do much for it if everything it tried to catch turned to stone and sunk to the bottom of the ocean. Therefore, its gaze instead stuns its prey, allowing it to catch it in its mouth while it drifts lifelessly.

If the basilisket sees its reflection with 15 feet of it in bright light, it mistakes itself for a rival and targets itself with its gaze.

If the megabasil sees its reflection with 60 feet of it in bright light, it mistakes itself for a rival and targets itself with its gaze.

Amphibious. The basilisk can breathe air and water.

Now you’ve got some options for basilisks to play around with ranging from low-level threat to high-level danger. So have fun!

If there’s any requests you have or something (or someone) you’d like me to stat, feel free to drop a message below in the comments or contact me at hamrickbrands@gmail.com.

Next up I’ll be covering behirs and other monsters created for slaying dragons. See you then!