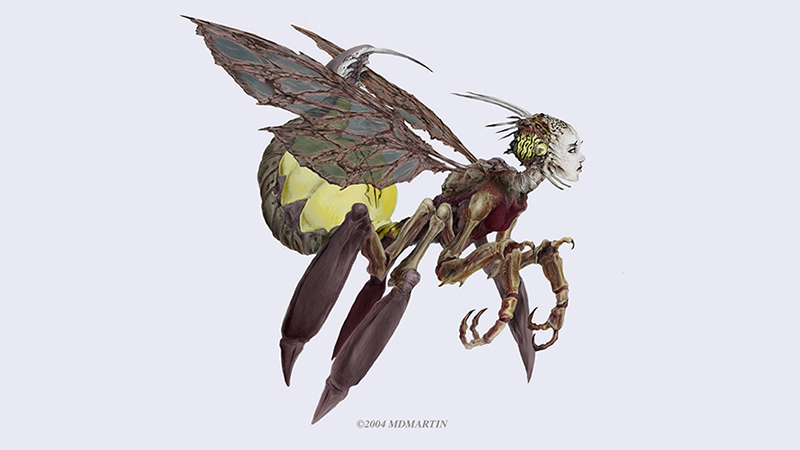 Bisans are nature spirits similar to dryads or bajangs, in that their life forces are tied to a single tree. They are most commonly associated with trees that are valued for their sap, gum, oil, or wood, primarily camphor, sometimes teak.

In their natural form, bisans look like human women, with long, flowing hair (dark brown, black, or white) and soft green eyes. They typically wear blue or pale green silk robes. Their apparent age depends on the age of the tree to which their life force is bound, but has no bearing on their abilities. They tend to reflect their tree’s appearance in other ways as well, such as by wearing the flowers of their tree in their hair, or in the color of their skin.

Bisans are rarely encountered in their natural form, preferring to use their shapeshifting ability to assume the form of a giant wasp.

Highly intelligent and clever, a bisan can be a formidable enemy when angered, particularly if someone threatens her personal tree. In general, however, these spirits try to avoid combat and prefer to use their spells to cause mischief and grief. If forced to fight, a bisan typically flees at the first opportunity, unless she is defending her tree.

Shapechanger. The bisan can use its action to polymorph into a giant wasp, or back into its true form, which is humanoid. Anything it is wearing transforms with it, but nothing it is carrying does. It reverts back to its true form if it dies.

Magic Resistance. The bisan has advantage on saving throw against spells and other magical effects.

Tree Symbiosis. A bisan’s lifeforce is tied to a single tree in the forest where it dwells. If the tree is destroyed (chopped down, burned, or rotted with magic) the bisan dies immediately.

Sting (Wasp Form Only). Melee Weapon Attack: +4 to hit, reach 5 ft., one creature. Hit: 5 (1d6 + 2) piercing damage, and the target must make a DC 11 Constitution saving throw, taking 10 (3d6) poison damage on a failed save, or half as much damage on a successful one. If the poison damage reduces the target to 0 hit points, the target is stable but poisoned for 1 hour, even after regaining hit points, and is paralyzed while poisoned in this way.