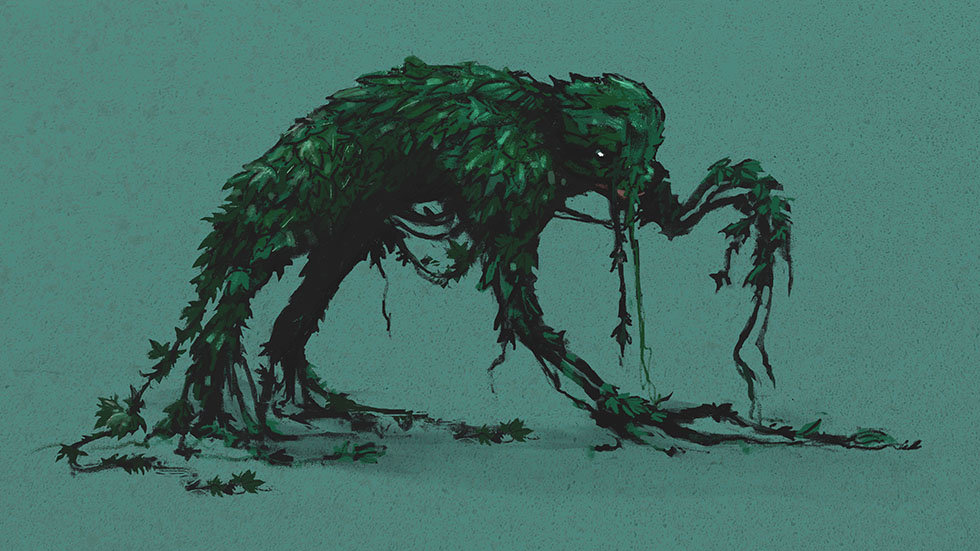 I’ve got a green thumb. True story. Love to garden! So it terrified me to my core to think that my shrubbery can come to life and try to eat me in my sleep. Blights!

What is a blight?

When parts of a forest go bad because some big time evil doer died or left a part of itself there, the plants come to life. And [cheesy vampire voice] dey vont. To suck. Your bloooood!

But really, blights are just low-level forestry bad guys for when your first level adventurers get sick of fighting goblins, skeletons, and bandits.

According to the lore, blights spring up from the roots of a Gulthias tree. The Gulthias tree takes its name from some vampire that died in D&D lore. It and its minions were first featured in the first major 3rd edition module, the Sunless Citadel, which is now available in the Tales from the Yawning Portal fifth edition book.

There is also a tree blight found in The Curse of Strahd.

How do 5e blights fight?

Blights aren’t particularly bright. Of the three Monster Manual blights, the vine blight is the smartest… at 5 Intelligence. However, a blight is less of a self-thinking creature and more of an automaton. Honestly, blights would make a lot more sense as undead instead of trees, since that’s basically what they are: dead animated plants.

The twig blight is the puniest of the bunch and really only functions well when in great numbers. Granted, its small bonus to stealth coupled with its false appearance feature helps it get the drop on imperceptive foes. From there, it’ll seek to surround its foes and claw at them until a) the targets die or more likely b) all the twig blights get smashed into, uh… smaller twigs. The only thing that would probably drive a twig blight to fleeing is the presence of fire. They might be under direction to kill kill kill by Poppa Gulthias, but they certainly don’t wanna mess with being set ablaze. Otherwise they’ll fight ’til smooshed because that’s what they’ve been commanded to do.

Next comes the ranged attacker, the needle blight. At 30/60 range, they’ll probably attack just outside of their short range, sucking up the disadvantage, but keeping distance between themselves and melee fighters. More than likely, these guys won’t be alone, either, pairing up with other blights and offering assistance from afar. They too are driven by compulsion to kill, so it’s unlikely they’ll break from a fight.

Finally, is the “tank” of the trio, the vine blight. The vine blight has higher armor class, more hit points, and its constrict powers means it’s probably good at tying up tougher opponents. Plus, they’re also decent at staying hidden until the time is right.

Hopefully now you can see how the three work together to complement each other. You’ve got the vine blights taking the hits and holding down the enemies. Meanwhile, the twig blights swoop in and start clawing everyone up while the needle blights keep their distance and chuck painful needles.

What 5e blight variants are needed?

Blight challenge ratings are 1/8 for twigs, 1/4 for needles, and 1/2 for vines. These are first level fodder and beyond insane mob numbers, don’t really do much for PC’s beyond the first tier.

What’s funny is that the tree blight from Curse of Strahd is a CR 7 baddie, worth 29 times the experience than the next toughest blight is worth. The other blights in the Curse of Strahd adventure are either used as support or come in massive mobs (one area has freakin’ twenty-four twig blights that attack!).

Therefore, my goal here is to bridge the gap a little. That way, if someone wants a full-on blight campaign–that’s a lot of undead trees–they can do it without any sort of interference from pesky humanoids or undead.

Let’s say that we wanted to create a campaign that took players from first to fourth. The first thing I’d want to do is figure out what the end boss is going to be.

In this instance, it’s going to be the tree blight at CR 7. Four adventurers at 4th-level fighting a tree blight will find it to be a pretty extreme fight by itself.

And that’s the boss encounter. Sure, it’s a bit extreme, tossing out 250 more experience per adventurer than a deadly encounter even should at 4th-level. But you want something epic for the end of a 4-level campaign.

But there’s still a whole lot of experience to cover. And nobody wants to do it with just twig blights at 25 XP each. Starting off, we’re going to need something that can shell out at least 250 experience per adventurer. That makes for a solo “medium” encounter. So, there’s a CR 4 we’ll need to make.

And what about some CR 1 monsters just for the fun of it? At level four, the PC’s can handle two CR 1’s as an easy encounter, three as a medium encounter, four as a hard encounter, and five as a deadly encounter. Reference the XP Thresholds by Character Level chart on page 82 of the Dungeon Master’s Guide for details.

Next, let’s create a CR 2, too. At CR 2 one is an easy encounter, two are medium, and three are deadly.

And heck, why break the chain? Let’s make a CR 3, too. That’s one for easy and two for deadly.

First up is our Challenge Rating 1 blight. How about a blight that’s poison ivy? Fire ivy blights! They’re similar to the vine blights, but instead secrete a deadly poison while it holds you. Rather nasty buggers.

The Challenge Rating 2 blight will be a pollen blight. These are support attackers who use their pollen to blind those around it. Meanwhile, the other blights (and undead and constructs) aren’t affected by it. I’m getting itchy eyes just thinking about it.

Why confine all these ideas to just plants? After all, the effects of the evil infect the entire forest. And there sure is a lot of moss in the forest. Thus, a moss blight, that acts a bit like an ooze and/or rug of smothering. These behemoths seek to bury would-be challenges under their furry green carpets. That’s our Challenge Rating 3 guy.

And finally, one that I’ve had kicking around in my head for a while: a rot blight coming in at Challenge Rating 4. These are fruit bearing trees that have gone bad. Now, they chuck their rotting fruit at their foes and can raise swarms of insects to make an adventurer’s day lousy. To really drive the rot theme home, let’s make the insects rot grubs from Volo’s Guide to Monsters.

As usual, all of these blight variants are free for you to use in your 5e campaigns. Just not commercially! And the art isn’t mine… borrowed!

False Appearance. While the blight remains motionless, it is indistinguishable from a patch of ivy.

False Appearance. While the blight remains motionless, it is indistinguishable from a bed of moss.

Smother. Melee Weapon Attack: +5 to hit, reach 5 ft., one Medium or smaller creature. Hit: The creature is grappled (escape DC 13). Until this grapple ends, the target is restrained., blinded, and at risk of suffocating, and the moss blight can’t smother another target. In addition, at the start of each of the target’s turns, the target takes 13 (2d6 + 3) bludgeoning damage.

Halo of Pollen. Any creature that starts its turn within 5 feet of the blight must succeed on a DC 12 Constitution saving throw or be blinded until the start of its next turn. On a successful saving throw, the creature is immune to the blight’s Halo of Pollen for 24 hours. Plants, undead, and constructs ignore this effect.

Concentrated Pollen. Ranged Weapon Attack: +4 to hit, range 10/30 ft., one target. Hit: 14 (4d6) poison damage. If the target is a creature, it must succeed on a DC 12 Constitution saving throw or be blinded for 1 hour. A lesser restoration or other spell ends this effect. Plants, undead, and constructs ignore this effect.

False Appearance. While the blight remains motionless, it is indistinguishable from a dead tree.

Multiattack. The blight makes three attacks: two with its branches and one with its grasping root.

Grasping Root. Melee Weapon Attack: +5 to hit, reach 10 ft., one creature not grappled by the blight. Hit: The target is grappled (escape DC 13). Until the grapple ends, the target takes 5 (1d4 + 3) bludgeoning damage at the start of each of its turns. The root has AC 14 and can be severed by dealing 3 slashing damage or more to it at once. Cutting the root doesn’t hurt the blight but ends the grapple.

Summon Rot Grubs (Recharge 6). A swarm of rot grubs appears in a space within 5 feet of the blight even if that space is currently occupied and acts as an ally of the blight.