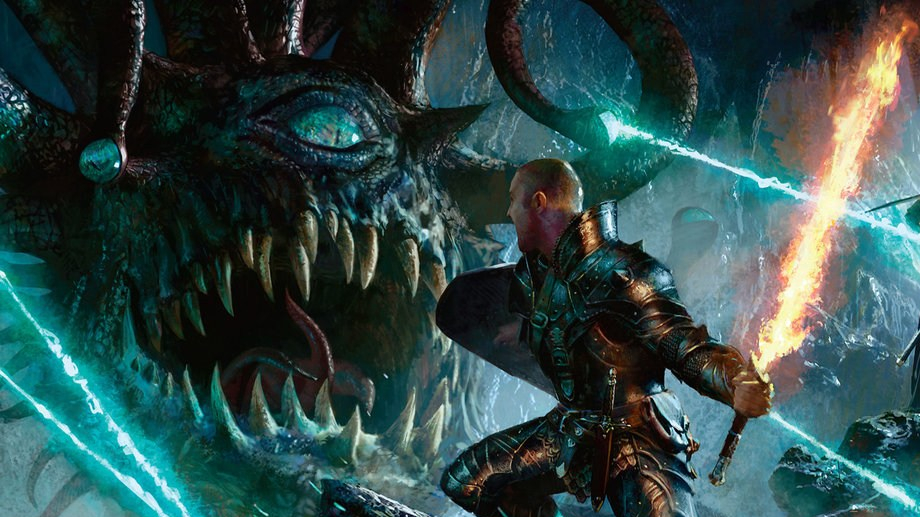 Hello all! I thought I might start putting out recaps of my Saturday sessions so you all can get a look into the world of DMDave. And don’t worry, Twitch/Live Streaming is coming as soon as our Twitch man, Clint, gets his laptop running (it failed its Dex save versus lightning a couple months ago).

Here are the most important PCs and NPCs participating in my Saturday sessions.

The Story So Far

The group has traveled all over the Sword Coast hoping to solve the mystery of Nezznar–which is actually a clan of doppelgängers that call themselves “Nezznar”–and why he/they want to rid the world of magic.

After a brief stint in the Cat City of Nathlekh (where they were hunted by a ferocious assassin named Umgru the Slayer), the group awoke to find themselves north of the Spine of the World just outside of a mysterious forest town.

What Happened in Episode 38

The Bloody Bunch woke up along a well-worn dirt trail in the Spine of the World mountain range. They suddenly discovered themselves with all new gear and a giant machine man (a shield guardian) that followed Amraam’s commands.

Littering the road were flyers to a major gathering in Silverymoon; Amraam’s father’s 500th birthday extravaganza.

Turns out that the flyers were accidentally dropped by a giant-bat-mounted messenger.

Right away, the group noticed something unusual with the messenger: he was a doppelgänger. And not just any doppelganger, but one of the “Nezznar” doppelgängers. Begging for its life, the doppelgänger (who they later learned was named Omash) told them that the answers they seek to the Nezznar mystery lied in the town further down the trail.

The Bunch let Omash go as two more “humans” approached. The pair attempted to flee but the Bunch cut them down, killing one (causing it to revert to its original, doppelgänger form) and knocking out the other. They left living doppelgänger bound with manacles in the road.

On both of the doppelgängers, the Bunch discovered maps detailing the area around the mountains with various towns and villages marked with Xs. In addition, a line on the map marked a path leading from the group’s current location to Silverymoon.

The two doppelgänger’s mounts–a pair of giant bats–were in the center of the road. Each one had four bags strapped to its undercarriage, and each bag contained the residue of one or more dead beholders inside. The group estimated that the bags could have once held the central eyes of dead beholders which Nezznar’s group has been using to stifle magic users.

The Old Mill and the Hole

Traveling along the trail, the group came to a mill powered by a wide creek. In the distance, they could make out the domed top of a temple. Also, casting a large shadow over the valley was a massive rock spire in the shape of a bull’s head along the road.

The group easily broke into the mill thanks to Vaston’s ridiculous lockpicking skills. Inside, they found a trap door leading down to a basement. And in the basement, they discovered old chicken cages and soundproofing along the walls. In addition, a 30-foot pit dominated the center of the room. In the pit was a tunnel leading west-to-east, seemingly dug by some massive burrowing creature.

A quick climb up the bullshead cliff behind the mill brought the Bunch to a massive bat cave. Within, the group discovered more messenger bags, saddles and the rookery for the giant bats. There was nothing else of interest in the cave.

Amraam did take a quick look out across the way and noticed that some sort of “massive molehill” came from within the bullshead peak, crossed the creek, and dove under the mountains to the east. He could also make out the rooves of buildings to the south.

The Stairs and Stone Golems

Heading south, the group discovered a staircase leading into the bullshead mountain. Along the staircase was ancient art depicting minotaurs. Once they reached the top of the stairs, a pair of bronze doors blocked the way into the mountain. While investigating the door, two massive minotaur statues sprung to life and attacked the group.

The Bloody Bunch battled the stone golems, crushing them within a few short rounds. Reverence took significant damage from the encounter.

With the golems out of the way, Rustle picked the lock and inside they went.

Immediately, the Bloody Bunch stood toe-to-toe with a pair of levitating mindflayers and a small group of psionic quaggoths in the pit below. Acting quickly, Amraam lobbed a powerful fireball into the group, nearly killing all of them.

From there, the martial combatants took care of the rest. One of the mindflayers managed to just barely plane shift away. However, the other one wasn’t so lucky.

That lone dead mindflayer possessed a map similar to the doppelgänger messengers, but with a larger scale and different markings. On it, marked in Deep Speech, were the locations of beholder lairs all around Faerun.

As they ventured deeper into the maze-like mines of the bullshead peak, the group came face-to-face with a deadly beholder and its minotaur minions.

Despite the apparent danger, Reverence charged into the room without thinking taking position behind the beholder while Rustle leaped up to distract the beast.

With its anti-magic cone nullifying the other six members of the party, the beholder fired four of its deadly eye rays at Reverence in rapid succession. Fortunately, Reverence’s faith in Lliira protected him from the beholder’s power. In the chaos, Rustle charged in, ran up the sheer surface of a rock wall, and used a flurry of kicks to drop the beholder to the ground, stunning it.

The beholder down, the remainder of the party joined into the fight, ganging up on the eye tyrant. After the beholder took multiple hits while in its semi-incapacitated, Rustle dropped back down to the ground, thrust his fist into the rear of the beholder’s thick, fleshy skull and removed a chunk of the beast’s brain tissue, instantly killing the horror.

Shortly after the beholder’s death, the minotaurs were defeated; Lughwyn beheaded one while Rustle broke the neck of the other.

Afterward, the group removed the beholder’s central eye, putting it on ice for later use.

Tune In Next Week for Episode 38

Tune in next week when the Bloody Bunch tries to answer the following questions:

Be sure to follow the blog by opting in on the right sidebar or down in the footer.

Art by Wizards of the Coast and cartography by JD Russell.