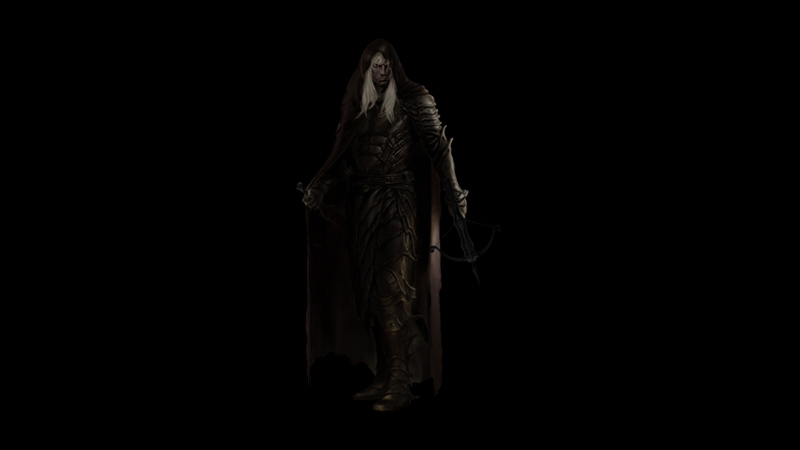 If you’re a member of the Bloody Bunch, you probably shouldn’t read this. You’ve been warned.

One of the main villains of the Bloody Bunch campaign is a doppelgänger named Vahrek who has assumed the identity of a long-dead drow slave named Nezznar. To some, he’s known as Nezznar Prime. None who respect him would dare call him by real his name.

Vahrek has amassed a following of doppelgängers who believe that all of Toril (and the multiverse) should be rid of magic. In the past, he has plotted to rid the world of the weave by collecting artifacts that can sever the connection of the different planes from the Prime Material. Now, it seems he’s up to something much grimmer involving beholders. But what?

That’s what the Bloody Bunch hopes to discover.

Shapechanger. Vahrek can use his action to polymorph into a Small or Medium humanoid he has seen, or back into his true form. His statistics, other than his size, are the same in each form. Any equipment he is wearing or carrying isn’t transformed. He reverts to his true form if he dies.

Assassinate. During his first turn, Vahrek has advantage on attack rolls against any creature that hasn’t taken a turn. Any hit Vahrek scores against a surprised creature deals an additional 10 (3d6) damage and is a critical hit.

Legendary Resistance (3/day). If Vahrek fails a saving throw, he can choose to succeed instead.

Read Thoughts. Vahrek magically reads the surface thoughts of one creature within 60 feet of him. The effect can penetrate barriers, but 3 feet of wood or dirt, 2 feet of stone, 2 inches of metal, or a thin sheet of lead blocks it. While the target is in range, Vahrek can continue reading its thoughts, as long as Vahrek’s concentration isn’t broken (as if concentrating on a spell). While reading the target’s mind, Vahrek has advantage on Wisdom (Insight) and Charisma (Deception, Intimidation, and Persuasion) checks against the target. In addition, Vahrek has advantage on saving throws versus the target’s spells and the target has disadvantage on its attacks against Vahrek. Vahrek can only read the thoughts of one creature at a time.

Move. Vahrek moves up to his speed without provoking an attack of opportunity.

Will the Bloody Bunch be able to best the villainous Vahrek? Find out by following the blog and keeping up with the weekly episodes.

Just opt-in using the form on the sidebar or down in the footer.