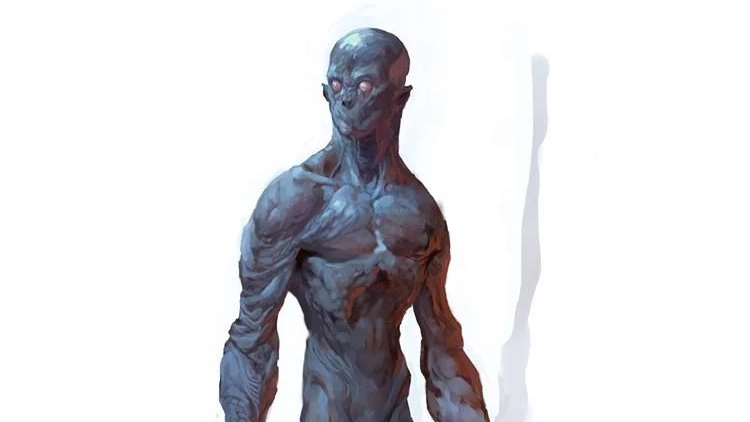 Welcome back to another recap of the Bloody Bunch. Exciting one this week as the Bloody Bunch discovered a purple worm nest, fought some mind flayers, and finally came face-to-face with the BBEG, Vahrek.

Also, Clint (Vaston’s player) recorded the entire session. I should have the recording available soon.

Here are the most important PCs and NPCs participating in this episode.

What Happened in Episode 38

The Bloody Bunch recovered after a short rest following their battle with a beholder and its minotaur minions in the series of caverns below bullshead peak. They then set out to explore the rest of the cavern to try to find out what the Nezznar doppelgangers were up to.

After recovering from their encounter with the beholder, the Bloody Bunch stumbled upon a sack of gems the beholder kept hidden in a tunnel to the west. From there, they headed north.

In a large underground pool, the group found hundreds of beach ball sized purple worm eggs with plenty of young worms swimming among them. Recognizing the danger inherent in that many purple worms, the Bunch debated over what to do. Not wanting to burn resources right away, they decided to continue and eventually return to it.

A pair of mindflayers tried to get the drop on the Bunch soon after and were quickly run off (after stunning 4/7’s of the group that is). Just beyond the cavern, they discovered a massive purple worm drugged and chained in a narrow chamber. Another mindflayer was drawing eggs from it using some sort of machine with an attached hose. That mindflayer wasn’t as lucky as the two others that escaped and suffered a crossbow bolt through the eye thanks to Vaston.

A quick investigation offered that the mindflayers were collecting the purple worm eggs. Amraam, knowing a thing or two about purple worm physiology, recognized that there was probably something fertilizing the eggs nearby. But what?

At the rear of the mother’s chamber, the Bloody Bunch came across a well-worn tunnel leading deeper underground.  They decided not to press on, and instead thought it might be better to search the rest of the upper level before heading deeper into the Underdark.

It didn’t take long for the Bloody Bunch to discover the source of fertilization: a smaller, brightly-colored, purple worm “male.” Like the mother, the father was guarded by mind flayers. This time, the group was prepared; Luhgwyn pulled out the central eye of the dead beholder, turning it to the mind flayers in order to nullify their innate psychic abilities. From there, the group killed two of the three squid-headed psions The third they pinned down and questioned (Reverence communicating and intimidating).

The mind flayer revealed what it knew of the operation. It was all under the orders of Vahrek, the so-called “Prime Nezznar” in the town to the south. Furthermore, the mindflayer pointed out that the “mother” oblex, the original, was there as well, warning the Bloody Bunch that facing either meant death. The Bunch then let the mind flayer flee.

Knowing that they had to handle Vahrek and the mother oblex, the Bloody Bunch exited the mine. There, they came face-to-face with a squadron of elven soldiers from Silverymoon. Leading the group was none other than Aethal, Amraam’s oldest brother and heir to the Silverwine family estates.

Aethal explained to Amraam that he and his men had secured the town to the south, capturing a small group of doppelgangers that had been posing as the townsfolk. The Bloody Bunch suspected something was fishy, but Aethal’s knowledge of his brother, Amraam seemed to check out.

The elves lead the Bloody Bunch to the town’s tavern.

The town of Minothros was completely empty. Not a soul in sight. Inside the tavern, Aethal led the Bloody Bunch into the cellar where four doppelgangers were bound along with a dark-haired human the Bloody Bunch hadn’t seen in quite some time, Iarno “Glasstaff” Albrek.

Albrek had escaped the Bloody Bunch’s grasps months prior in the town of Phandilin. Rumors had circulated that he had made his way north. This proved it.

The Bloody Bunch wanted to interrogate Albrek themselves. However, Aethal denied, explaining to the adventurers that Albrek and the doppelgangers would stand trial in Silverymoon.

Eventually, Aethal lead the Bloody Bunch back upstairs to share beers. That’s when Phil noticed something moving across the street in the forest.

Two of Aethal’s guards intercepted a portly, human boy running the trees. A survivor? The elves pinned the boy to the ground in the middle of the street.

Reverence, wanting to speak with the boy, approached.

That’s when the boy’s voice changed to a familiar female voice, that of Tella the doppelganger’s.

“Reverence, you need to run!” Tella said, “Your lives are in danger!”

The boy then polymorphed into Tella’s familiar, female elven form.

Tella continued to tell the Bloody Bunch that Aethal and his men weren’t who they said they were. Amraam, for once trusting Tella, turned to Aethal and commanded him to show his blood to prove that he wasn’t a doppelganger. Pressed, Aethal finally dropped the act and revealed himself to be Vahrek, the Prime Nezznar.

Immediately, Vaston got off one hell of a shot on Vahrek, severely wounding the doppelganger. But Vahrek was extremely fast and was able to break away from the group and take cover in the nearby tree line.

Luhgwyn pursued the doppelganger. But Vahrek lept out from the trees, attacking with a poisoned shortsword. Luhgwyn shook off the poison, but Vahrek was able to escape again.

In the tavern, Rustle took on three of the doppelgangers at once, getting off a few good shots before he was eventually overpowered by the preternaturally fast shapechangers. Vaston, playing the role of the sniper at the window to back up the rest of the Bunch outside in the street, turned to help Rustle.

BOOM! Phil dropped a call lightning spell over the area, using his Channel Divinity to amplify its power, but Vahrek was able to nimbly avoid even Phil’s largest bolts. Amraam sicced Bigby’s Hand on Vahrek, holding him briefly, but Vahrek was able to escape that, too. Finally, Reverence, now with Tella riding with him on Arrow, charged Vahrek and smashed him with an explosive smite, nearly knocking Vahrek off his feet.

Back at the tavern, Rustle was prone and taking beatings. Vaston had helped him with a couple of the doppelgangers, but Rustle was close to perishing while a ferocious doppelganger attacked repeatedly with a sharp glaive. Fortunately, one final kick to the knee, however, knocked the doppelganger over, allowing Rustle to break the creature’s neck on the fall.

After searching for the hidden doppelganger for a few minutes, Reverence used locate object to track Vahrek’s poisoned short sword. The spell revealed that Vahrek had started to stealthily climb the mountain. Thinking fast, Reverence pulled a potion of spider climbing from his pouch and let Arrow, his mount, drink it. This allowed Reverence and Tella to charge vertically up the cliffside. After a quick gallop, Vahrek reappeared, emerging from hidden cover in the cliffside, attacking Reverence 50 feet in the air. The two traded blows, rocks falling to the ground far below.

Finally, Phil, who’d revealed a witch’s broom he’d been carrying in his pack, sped up to the battle and lobbed a shatter spell at Vahrek. Vahrek, already severely wounded from two critical hits, lost his grip on the cliffside and fell to the ground, his neck snapping on impact. Dead, he reverted back to his true, blue doppelganger form.

Shortly after Vahrek’s death, the Bloody Bunch finished off the remainder of the doppelgangers.

Remembering Iarno and the other group of doppelgangers in the basement, Reverence immediately rushed back to the tavern.

Naturally, the villains were gone, leaving behind a mess of broken ropes. However, the Bunch quickly found a secret door in one of the tavern’s large wine casks with a ladder leading below.

Tune In Next Week for Episode 39

Tune in next week when the Bloody Bunch tries to answer the following questions:

Be sure to follow the blog by opting in on the right sidebar or down in the footer.

Art by Wizards of the Coast and cartography by JD Russell.