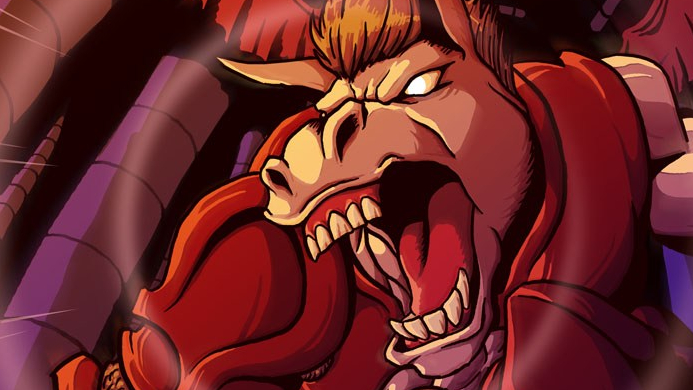 Last night, I had a dream about the first video game that I ever played, Zelda 2: The Adventure of Link. For those who don’t remember (or aren’t old enough to remember), the boss of the first dungeon was Horsehead. Horsehead was literally just that: a knight with the head of a horse.

I figured with the current dungeon that I’m running, I might as well recreate Horsehead for Fifth Edition. I got the idea that Horsehead is a yugoloth. And while the word origin for “yugoloth” seems to be all over the place, the closest I could get to was Italian (mezzoloth, etc.) Therefore, I dub horsehead a cavaloth. Acheronians beware!

Damage Resistances cold, fire, lightning; bludgeoning, piercing, and slashing from nonmagical attacks or all (with potion of invulnerability)

Special Equipment. Horsehead carries a potion of invulnerability and a potion of speed, both of which he drinks before combat. In addition, he has two potions of superior healing. He wears a ring of protection, +2 plate mail, and wields a +2 shield. His weapon of choice is a +3 unholy mace.

Brute. A melee weapon deals one extra die of its damage when Horsehead hits with it (included in the attack).

Charge. If Horsehead moves at least 20 feet straight toward a target and then hits it with a melee weapon attack on the same turn, the target takes an extra 9 (2d8) damage on the same type. If the target is a creature, it must succeed on a DC 19 Strength saving throw or be pushed up to 10 feet away and be knocked prone.

Hasted (with Potion of Speed). Horsehead has advantage on Dexterity saving throws. On each of his turns, he can take on additional action. That action can be used to take the Attack (one weapon attack only), Dash, Disengage, Hide, or Use an Object action.

Magic Resistance. Horsehead has advantage on saving throws against spells and other magical effects.

Multiattack. Horsehead makes two melee attacks, or it makes one melee attack and teleports before or after the attack.

Thrash. Horsehead makes a melee weapon attack against each creature he can see within 5 feet of him. Each attack made in this way is made at disadvantage.

Teleport. Horsehead magically teleports, along with any equipment he is wearing or carrying, up to 60 feet to an unoccupied space he can see.