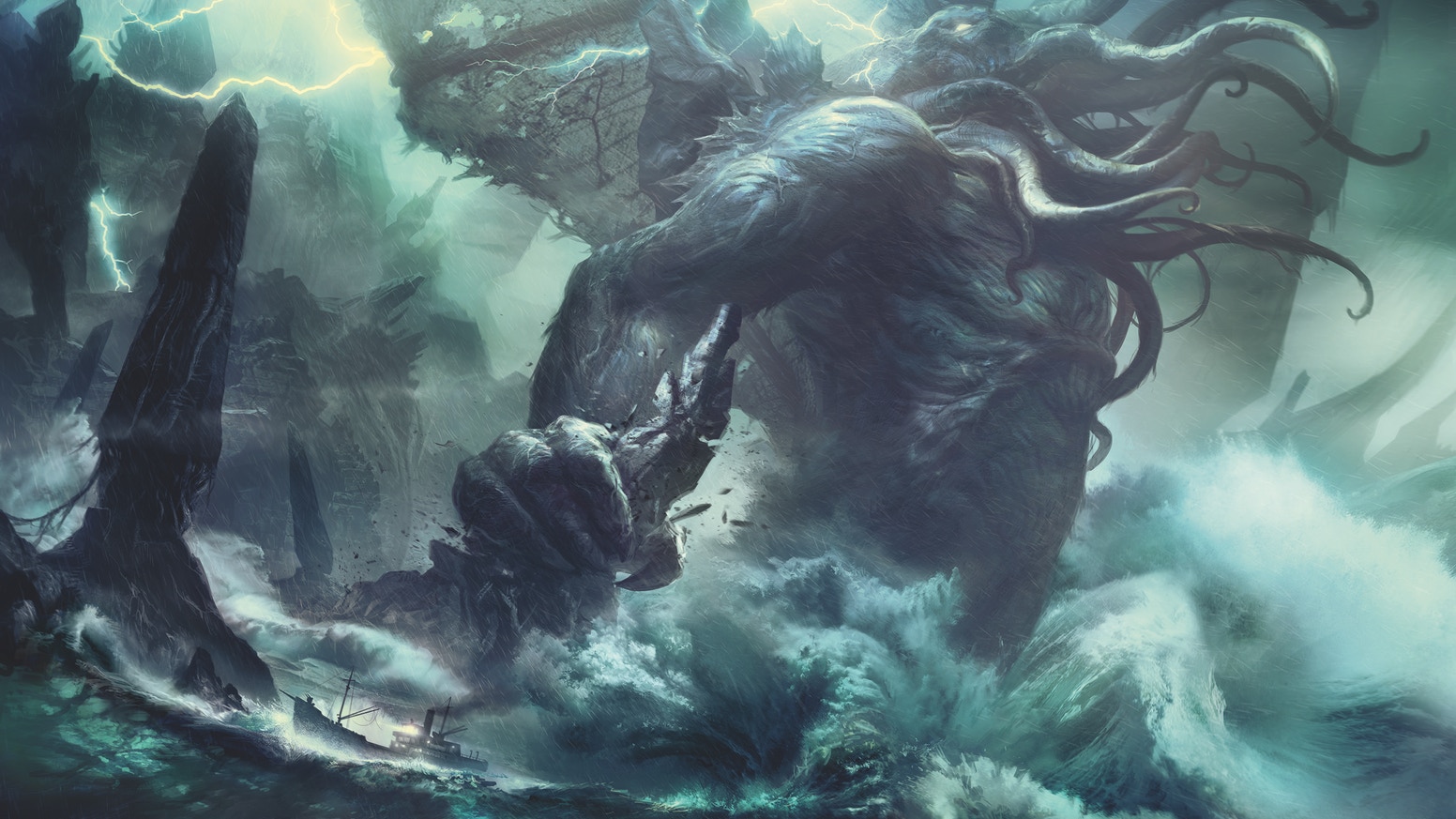 This is a preview of Cthulhu for Fifth Edition. If you’d like a printable PDF of this stat-block Cthulhu, head over to my Patreon.

Great Cthulhu is nightmare made flesh, towering well over 1,000 feet high. His head appears as an octopus or squid, with writhing lengths of tentacle reaching 100 feet or more. His body is a corpulent slab of slime-kissed flesh, generally humanoid except for his enormous size and terrible claws on his hands and feet. Great batlike wings grow from his back, useful both in the air and in the water. Cthulhu dwells in the corpse city of primordial R’lyeh, sunken deep beneath the surface of the Pacific. He lies in a deathlike trance, but someday the city will rise and he will wake. When he does, let the world weep, for his hunger is an entity unto itself, and will not be slaked.”

In the city are also entombed other creatures of primordial ancestry, creatures who arc possibly members of Cthulhu’s race, though none have taken on aspects of godhood, as Cthulhu has. Great Cthulhu is the high priest and ruler of them all and is by far the most potent.

Great Old One. Cthulhu is immortal. He does not require air, food, drink, or sleep.

Demigod. Cthulhu makes all ability checks, attack rolls, and saving throws with advantage. If Cthulhu rolls a 1 while making an attack, it does not count a critical failure. In addition, all of Cthulhu’s senses extend up to five miles.

Immutable Form. Cthulhu is immune to any spell or effect that would alter his form.

Limited Magic Immunity. Cthulhu can’t be affected or detected by spells of 6th level or lower unless he wishes to be. Cthulhu has advantage on saving throws against all other spells and magical effects.

Remote Sensing. Cthulhu can perceive anything within 5 miles of one of his worshippers, a creature charmed by him, or a creature that speaks his name, as well as any of his holy sites or objects.

On his turn, Cthulhu can take 3 actions, choosing from the options below.

Claws. Cthulhu attacks with his claws.

Heal. Cthulhu uses his head to heal himself.

Move. Cthulhu uses his head to move with his feet or his wings.

Non-Attack Action. Cthulhu can take the Disengage, Dodge, Help, Hide, Search, or Use an Object action.

Spell. Cthulhu uses his head to cast one of his innate spells.

Tentacles. Cthulhu attacks with up to three of his tentacles.

Magical Attack: Cthulhu uses one of the following magical effects.

Movement: Move up to the speed of one of Cthulhu’s movement components.

Wing Blast. Whenever Cthulhu moves using his wings, each creature within 100 feet of Cthulhu at the start of his movement must succeed on a DC 27 Dexterity saving throw or take 31 (6d6 + 10) bludgeoning damage and be knocked prone.

Special Melee Attack: Cthulhu swings one of his arms. Each creature in a 100-foot cube originating from Cthulhu’s body must make a DC 27 Strength or Dexterity saving throw (target’s choice). On a failure, a target takes 65 (10d10 + 10) bludgeoning damage plus 55 (10d10) necrotic damage and is flung up 500 feet away from Cthulhu in a direction of Cthulhu’s choice and knocked prone. If a thrown target strikes an object, such as a wall or floor, the target takes 3 (1d6) bludgeoning damage for every 10 feet it was thrown to a maximum of 20d6. If the target is thrown at another creature, that creature must succeed on a DC 27 Dexterity saving throw or take the same damage and be knocked prone.

If the saving throw is successful, the target takes half the damage and isn’t flung away or knocked prone.

In addition, unsecured objects that are completely within the area of effect are automatically flung 500 feet away from Cthulhu.

Want a PDF of this?

This is a preview of Cthulhu for Fifth Edition. If you’d like a printable PDF of this stat-block Cthulhu, head over to my Patreon.

Is this overpowered? Hell yes, it is.

But hey, I wanted to do the big guy justice. So how do you beat something like Cthulhu? That’s totally up to you, the GM. Perhaps you can find the right ritual to banish him back to R’yleh. Or maybe you can drop a few nuclear warheads on his head? This sort of challenge is meant to be extremely difficult, beyond any tarrasque, lich, or worse.