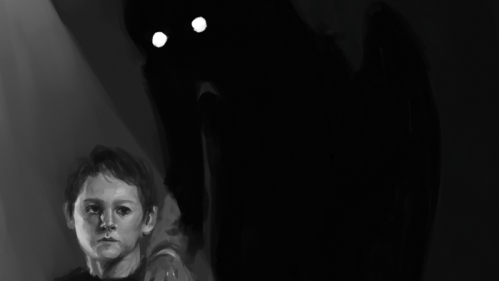 DM DaveLeave a Comment on Monsters by Jack: DreemeenPosted in Fun Stuff

My six-year-old son, Jack loves to create D&D monsters. And our protocol is pretty simple. I tell him to draw the monster and write down at least three things about the monster. Then, I’ll recreate it as a D&D monster, sometimes with art to accompany it.

Today, Jack came up with the dreemeen. Here’s his description:

Basically, this creature goes into your nightmares, sees what’s there, then recreates whatever horrible things that lurk in your imagination into reality.

Jack gave me a Challenge Rating 9 to work with, so that makes things a little easy. My first thought when he described this was that this seems like a combination between three different elements in 5e.

First, his image is reminiscent of the vampiric mist from Mordenkainen’s Tome of Foes. And that’s where I started, basing its movement, stats, saves, and other stats on that.

Next, I needed a dream attack. The oblex also from MToF has a pretty creepy power that lets it eat the memories of people then create simulacra of those its memories its drained. Kinda like the big fossil-fuel sludge thing in Dean Koontz’s phantoms.

However, this was all about nightmares. Creating nightmares. Becoming nightmares. And nightmares killing the “creator.” Therefore, I turned to the Player’s Handbook and read up on the Phantasmal Killer spell. The spell itself isn’t so hot, but if it could be a sentient monster that ate your nightmares and become what you fear, that sounded pretty cool.

Finally, I needed a few more adjustments to totally flush this beast out. I made its type an aberration, because in mind its motives are totally alien and not driven solely by compulsion like the vampiric mist’s would be. Plus, as a CR 9 creature, its stats had to go up significantly. I especially beefed up its Charisma which became its spellcasting ability. And as the finishing touch, I gave it an area attack to ward off any gangs that might try to pry it off its victim or corner it.

In the end, Jack came up with a pretty freaky monster capable of dealing tons of psychic damage and completely mind f’ing with any thing it comes into contact with.

The dreemeen is free for you to use in your own 5e campaign. Just not commercially. And the art isn’t mine. Borrowed! I plan on drawing up one for it soon, though.

Dream Impersonation. As a bonus action, the dreemeen can change its physical form to appear as an illusory manifestation of the nightmares of a target it has recently used its Dream Feeding action on. The target whose nightmares created the form must make a DC 15 Wisdom saving throw. On a failed save, the target becomes frightened for the duration. At the end of each of the target’s turns, the target must succeed on a Wisdom saving throw or take 55 (10d10) psychic damage. On a successful save or if the target creatures dies, the dreemeen reverts to its cloud form.

Dream Sense. The dreemeen can sense the location of any sleeping creature within 60 feet of it.

Sunlight sensitivity. While in sunlight, the dreemeen has disadvantage on attack rolls, as well as on Wisdom (perception) checks that rely on sight.

Nightmare Wave. The dreemeen magically emits psychic energy in a 15-foot cube centered on it. Each creature in that area must succeed on a DC 15 Wisdom saving throw or take 23 (4d8 + 5) psychic damage and be frightened for 1 minute. A creature can repeat the saving throw at the end of each of its turns, ending the effect on itself on a success. A target that succeeds on the saving throw is immune to the Nightmare Wave of all dreemeen for the next 24 hours.

Dream Feed. The dreemeen targets one sleeping creature it can see within 5 feet of it. The target must succeed on a DC 15 Wisdom saving throw or take 18 (4d8) psychic damage and the dreemeen may use its Dream Impersonation trait to assume the form of the target’s nightmares.

Hopefully you enjoyed Jack’s monster, the dreemeen. Be sure to keep checking each day for more cool 5e monsters and maps from me and Jack.