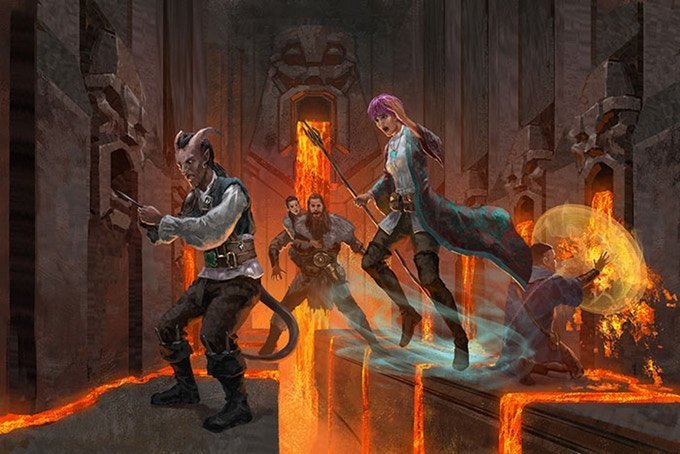 Looking for ways to trip up those pesky, over-powered characters that are stomping through your campaign? The traps detailed in this series focus on effects targeting certain group dynamics.

The fifth entry is called Magnetic Personality. This trap specifically targets creatures who wear heavy armor. While strong characters may be able to avoid the deadly parts of the trap, a well-balanced party will excel against it.

The characters enter a room with only one exit at the far end. On their left side is a large chamber. The north wall is completely magnetized. Any creature wearing medium or heavy metal armor is pulled straight to it. And if that’s not bad enough, they’ve got to pass through a beam of electricity as they go. Finally, the door at the far side is locked. You can give the lock any DC for breaking and

Trigger. This trap is constantly activated. At your discretion, you can offer a button somewhere else that turns it off. However, its default mode should be on.

Effect. Any creature wearing metal armor or made of metal has its movement speed reduced by half by the magnet and it has disadvantage on all Strength and Dexterity ability checks and all attack rolls. Also, creatures wielding metal weapons make attack rolls at disadvantage.

The first time a creature wearing a suit of heavy or medium metal armor enters the room or ends their turn in the room, they must make a DC 15 Strength saving throw against the magnetized wall. A character already restrained by the magnetic wall need not make the save until they free themselves. On a failed saving throw, the character is flung 35 feet towards the magnetized wall, taking 3 (1d6) bludgeoning damage for every 10 feet they travel before they hit the wall; they are then restrained by the wall.

A character restrained by the wall can use their action on each of their turns to make another Strength saving throw, freeing themself on a success.

If a creature passes through the electric beam as it is pulled towards the magnetized wall or if it voluntarily walks through the beam, it takes 7 (2d6) lightning damage.

The electric beam’s generators are easy to spot. They can be disabled with a successful DC 15 Intelligence check using proficiency in thieves’ tools, or they can be attacked. Each generator has an AC of 13, 10 hp, and immunity to poison and psychic damage. Only one generator needs to be disarmed or destroyed to shut both down.

Learn ways to increase the danger of this trap!

This article is available on Patreon in downloadable, easy-to-print PDF form. The PDF version also includes tips to up the danger for more experienced parties. When you become a Patron you get another 90 PDFs for you to download.