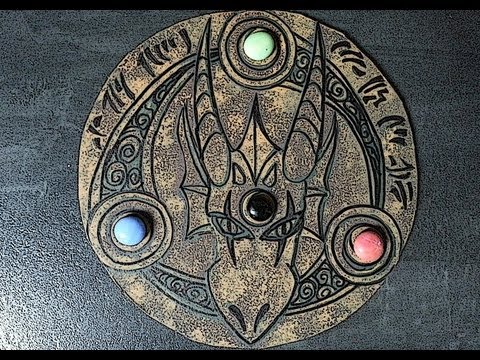 Fifth Edition has a lot of cool elements to it that GMs can use: combat, exploration, and, of course, plenty of role play. These are often considered the four pillars of a tabletop RPG. However, I believe that there is a fourth that’s just as important: problem solving and critical thinking. And it is arguably the most difficult of the four to plan properly.

This article goes in-depth on how to create puzzles for Fifth Edition, first, introducing common themes, then delivering a step-by-step method for adding puzzles to your own adventure.

Having read through a number of tabletop RPG modules and adventures, I’ve noticed that there are a lot of common themes among the various puzzles that appear. This is a list of the types I’ve encountered the most. Of course, this is by no means a definitive list.

The characters (and even the players) are given cards which they must arrange to solve the puzzle. Sometimes, the cards act as literal puzzle pieces that offer a clue when put together the right way. Other times they are clues themselves.

Example: the characters and players are given three cards that seem to read gibberish. However, if they are placed in a “staircase” formation, they read “GO DOWNSTAIRS.”

Certain puzzle solutions require that the characters carefully place an object. Sometimes, the object has multiple ways it can be placed, offering different benefits (or penalties) where it is placed.

Example: the characters discover an oddly-shaped sword. There are three holes in the floor. Placing the sword in the correct hole opens the door. Misplacing it triggers a trap.

Perhaps a little meta, but a puzzle might incorporate elements from a classic game such as chess or minesweeper. If the players are familiar with the function of the game, they can solve the puzzle in no time.

Example: the characters enter a room where its floors are marked with hexagonal tiles, each with a number on it. The numbers help the characters identify the location of traps, similar to how the game the numbered tiles in the classic computer game minesweeper does.

Objects given to the characters may have more than one use.

Example: a medallion the characters find in the first act is not only the key to an important door, but it serves as a compass on a map they discovered in the second map.

Sometimes, a magic item or clue hints that there may be an unseen danger somewhere in the challenge.

Example: while traveling through an ancient temple, the characters find a sword of reptile slaying just before they have to enter a sealed room.

An element of games that definitely don’t see enough use, illusions have many functions. They can place powerful illusory creatures in the paths of the characters, create hazards where there are none, or hide important information.

Example: the characters open a door, revealing a room with a massive pit. The only exit is 40 feet from where they stand. However, the pit is an illusion.

There are challenges that require a single character to solve without the help of his/her companions. This could be because the situation requires the party to split up (gasp), or something is preventing the party from openly communicating, such as magical darkness or the silence spell. It might also require a specific talent or skill the character possesses, such as a thief’s locking-picking skills or a mage’s talent for the arcane.

Example: a secret door opens so long as one of the characters stands on a pressure plate. The door automatically closes if the character steps off the plate.

The characters are given a magic item. While the magic item may initially appear to be useless or have a secondary value, it is used as part of the puzzle’s solution.

Example: the characters discover a magical gem that reveals the path through a maze of invisible force walls.

A few scenarios require the characters to use the monsters present to assist them.

Example: a huge chasm is the only thing between the party and the treasure they seek. Floating over the chasm are gas spores. To cross to the other side, the characters must use the gas spores as “stepping stones” leaping from one spore to the next.

Meta elements sometimes incorporate details from previous scenarios or sprinkle clues throughout the adventure which don’t become obvious until the characters reach a final puzzle. This works especially well as a “red herring” (see below) as these subtle clues can distract from immediate puzzles.

Example: in each previous puzzle room, the characters discovered numbers on the walls painted in red. Initially, they thought that the puzzles didn’t mean anything. But once they reached the final puzzle, it’s clear that the numbers were supposed to use in a combination lock.

Many puzzles have a specific order in which the characters should perform related tasks. Failure to follow the correct order could spell danger.

Physical props given to the players are a fun way to help visualize puzzles.

Example if a puzzle involves the characters using a mirror to solve it, why not include a mirror?

A red herring is a false clue within the adventure designed to throw the characters off the actual clues.

Example: the characters discover a key in the ancient tomb. However, the key doesn’t work in any of the tomb’s doors.

A riddle is a question or statement intentionally phrased so as to require ingenuity in ascertaining its answer or meaning.

Example: the sphinx poses the riddle: “What is the creature that walks on four legs in the morning, two legs at noon and three in the evening?” to which the answer is “man.”

Often, a puzzle requires the players and their characters to do basic arithmetic, numerology, or geometry.

Example: the characters discover five doors, each with a sequence of numbers. Adding the numbers together in each sequence reveals that four of the doors add up to an even number while the fifth adds up to an odd number.

Teamwork puzzles require the characters to work together to solve the problem.

Example: in order to see all of the clues within a temple, one character must ride on the shoulders of another.

The characters discover word clues that they must decipher to pass a challenge.

Example: the characters discover a word jumble. Putting the letters into the correct position, the word spells “BLACK IS THE KEY” which tells the characters to use the black key for the door intstead of green or red.

Part 2. How to Create Your Own Challenges

Now that I’ve broken down various styles of puzzles and challenges, you should have a decent idea of how to assemble good, level-independent challenges for your characters.

Here are a few steps I’ve ironed out to help in the challenge assembly:

1 – Come up with the solution to the challenge

The easiest way to create these challenges is to start from the end and work your way backward offering the best possible solution. You could even start with a map of a room and its obstacles.

Make sure you include a way out of the room or challenge-area. For example, a cylindrical-shaped room could have a hole in the ceiling that the characters need to escape through.

Once you have everything in place, work your way backward from the solution.

Try not to overdo certain themes. For example, every challenge involving a word puzzle may get boring after a while. Unless, of course, your players enjoy word puzzles.

A majority of the puzzle scenarios in Fifth Edition modules come with handouts to help the characters come up with a solution. In addition, many of the rooms can be difficult to visualize. It helps to create these handouts accurately for the characters to hold, view, and use.

3 – Supply the proper props and clues

Be sure to sprinkle a few of your challenges with red herrings, but don’t overuse it. Otherwise, the players will always be suspicious that there’s a red herring present.

If you choose to offer hints, make sure that the hint cuts straight to the core of the solution. For example, if the characters are supposed to ignore the cards in a particular challenge, make sure the hint tells them to do that. But don’t give away too much!

4 – When in doubt, “steal” from other sources

Supposedly, Pablo Picasso once said that “good artists borrow, great artists steal.” Don’t be afraid to do the same with your challenges. You could get ideas from your Sunday word jumble, or even use some of the challenges presented in official Fifth Edition books themselves (retooled, of course, if you’re going to sell the final product).

DMDave patrons of the copper tier and higher get access to more than 90 PDFs with new ones coming every day. It’s only $3 to get all these goodies.

What are you waiting for?