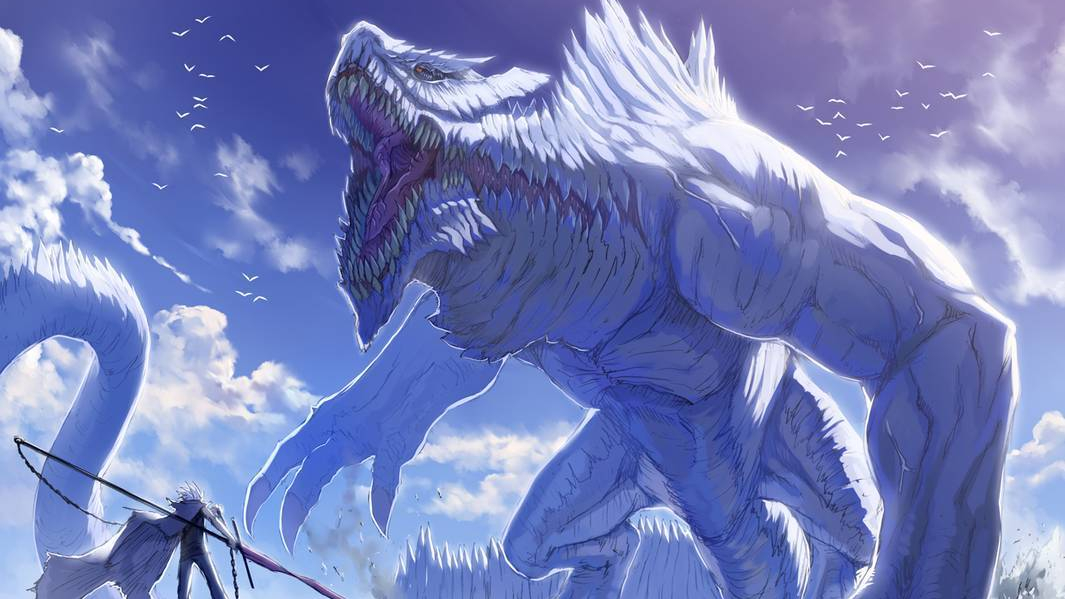 How to Create Epic Monster Encounters

The monster hunters discover what’s doing all the killing. They confront the creature, fight it, and… it dies in two rounds. Lame.

The Difficulty XP per Character table would list as “Deadly.” But they breeze right through it with hardly scratch! What’s up with that? Now your players are whining that the game is “too easy.” Or worse yet, boasting about how great they are! Ugh.

One of the core complaints I have of Fifth Edition’s word choice in this matter is that the term “Deadly” when applied to encounters, doesn’t really mean deadly, especially if the party is fully-rested. Instead, a Deadly Encounter actually represents roughly 30 – 35% of what a squad of healthy adventurers can deal with in a single adventuring day.

How to Create an Epic Monster Encounter

For epic monster encounters–one-off combats that could potentially end the lives of the entire party (the infamous Total Party Kill)–the encounter experience that you need to throw at the characters must equal 50 – 100% of the Adventuring Day XP total. These are “Epic” encounters.

Note that before they enter an epic encounter, the characters should be fully rested. It’s likely that they will need a long rest after the encounter, too. Even then, there’s a high probability that the entire party will perish in the combat. Consider placing these encounters before experienced players only.

The Epic Solo Monster Challenge Rating table below breaks down the suggested maximum challenge rating based on the average character levels and party size.

*You might avoid using epic encounters for 1st and 2nd level characters unless the party has 5 or more characters present.

Before you place an epic encounter in front of your characters, make sure you understand the creature that you are pitting against them.

How much damage can an epic-level creature deal in a single round?

The last thing you want to do is kill off all of your characters during the first round of combat. Be sure that you determine what strategies and tactics that your creature will take. That way, you will know how the characters will react to the damage it deals and what powers and abilities they possess that help them avoid taking massive damage.

For example, an ancient red dragon’s fire breath deals an average of 91 damage in a 90-foot cone. This is likely its opening move. If a party of four 14th-level characters fights the ancient dragon as an epic encounter, which characters will survive the initial blast?

The Monsters Know What They’re Doing

I recommend reading Keith Amman’s highly informative blog, The Monsters Know What They’re Doing, for tips on monster tactics. Keith breaks down most of the monsters available for GMs to select in Fifth Edition and educates on how the creature would attack based on its nature, its drives, and even its alignment. It will improve your combats by 200% or more.

What major defensive powers does the creature have and can the characters overcome it?

Defensive powers can radically change the dynamic of combat, too, so it’s important to make sure that the characters can overcome those defenses. At low levels, flying creatures are tough since most characters won’t have a method of flight until 5th level. Damage immunities are hard to get around, as well, especially if the characters have not acquired magic items. Is the creature resistance to magic? Does it have a lot of excellent saving throw or Legendary Resistance? Consider all these factors.

For example, a group of four 1st-level characters hopes to take on a banshee. Banshees can fly, have resistance to acid, fire, lightning, thunder, plus bludgeoning piercing, and slashing from nonmagical attacks. Oh, and they are immune to cold, necrotic, and poison, and damn near every condition. Pretty tough fight for a group of unprepared 1st-level characters.

Characters will need to make sure that they’re ready to fight a creature that has an effective 116 hit points, can outrun them, and can easily kill them in one hit.

What vulnerabilities does the creature have?

Next, does the creature have vulnerabilities that the characters can exploit?

Back to the banshee example, looking at its stat block we can determine that banshees have the following vulnerabilities:

Vulnerabilities need not only come from the creature’s stat block. Reading the fluff on the banshee, we can see that it has some story-driven vulnerabilities as well.

When it comes to epic encounters, give plenty of opportunities for the characters to research their foe. The section on “Monster Research” in this campaign setting offers new rules for researching monsters during the characters’ downtime.  It allows characters to predict and exploit vulnerabilities–both in the stat block and the creature’s own history–and overcome potential dangers in advance.

Also, don’t forget to include Chekhov’s Gun. ‘Chekhov’s Gun’ is a concept that describes how every element of a story should contribute to the whole. It comes from Anton Chekhov’s famous book writing advice: ‘If in the first act you have hung a pistol on the wall, then in the following one it should be fired. If the adventure involves the characters going toe-to-toe with a banshee, be sure to mention that a local antique shop carries a large, mirrored shield during the first act. That way, when the characters learn that the banshee hates mirrors in the second act, they can buy or borrow (or steal) the shield and use it against her in the final act.

Meanwhile, the warlock eldritch blasts her into oblivion. Obviously. Ω

This excerpt is from the Monster Hunters campaign setting appearing in BroadSword Monthly Issue #2. If you’d like to see more, be sure to sign up to DMDave’s Patreon. At the $3 level, here’s what you get:

And the higher tiers get even crazier benefits!

Check it out: DMDave on Patreon

Art by Microkey on DeviantArt.