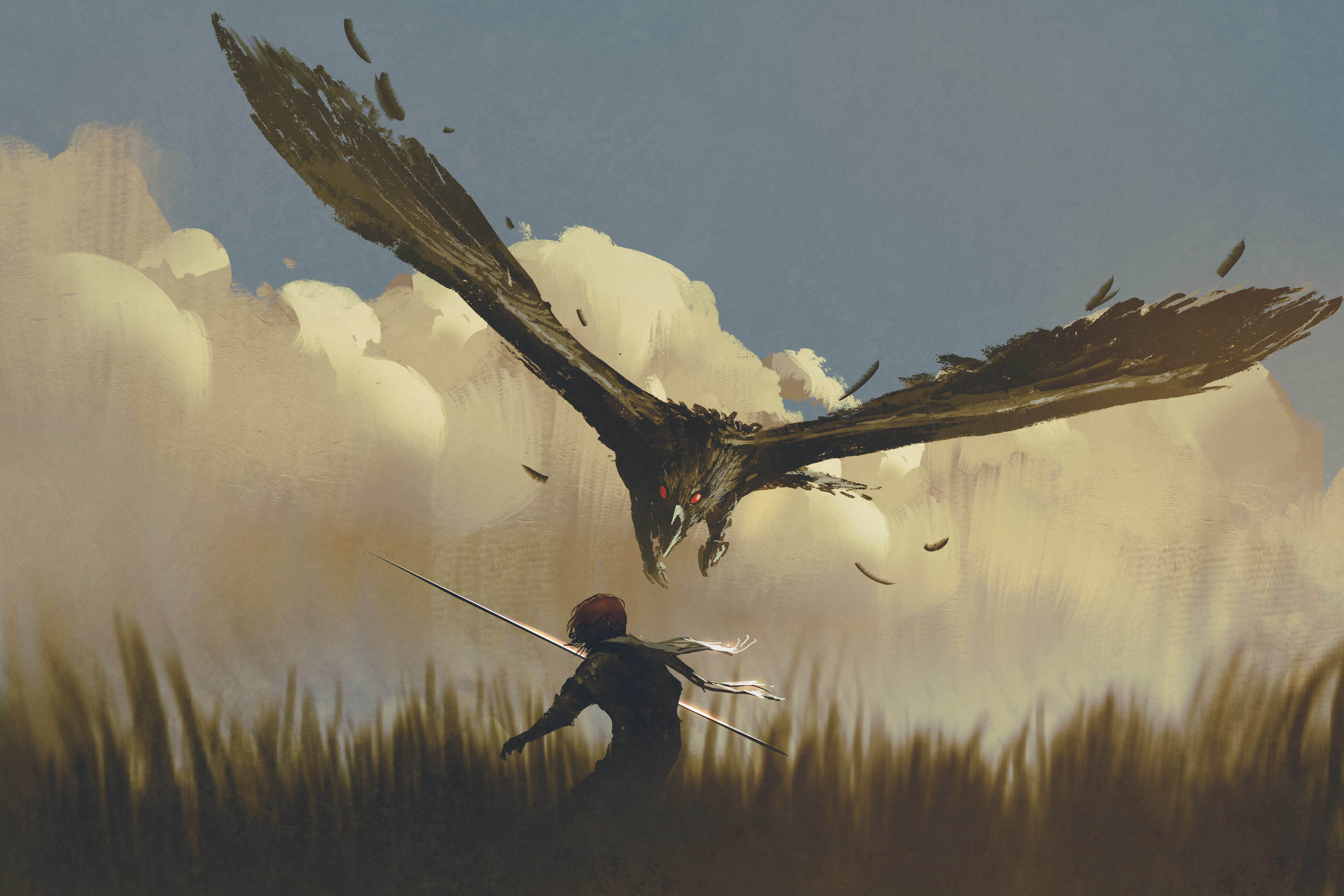 Sailing through the skies of The Summer Land and parts of Central Omeria are the red-eyed ewoskas, large, intelligent falcon-like birds whose shrill shriek can shrink creatures down to transportable (and edible) sizes.

Ewoskas are leftovers from the Transmuter Wars of the Hand of the Two. The great birds were tasked to fly over battlefields and pick off Karnionian mages. Once the Transmuters were driven from Omeria, the ewoskas retreated into the wilderness surrounding the Basilisk’s Spine Mountains.

The ewoskas frequently clash with the griffon riders of Kuhzuk and Anorian vaqueros of the Vaskil Valley. Out of sheer wickedness, the ewoskas enjoy stealing livestock and even the occasional farmer from the region, a point of contention among the humanoids that occupy the valley.

Many ewoskas have built their nests in the remains of the old dragon dens abandoned after the War of the Burning Plains. There, the ewoskas protect their eggs from those who’d hope to eradicate the evil beasts. In addition to the hoards leftover by the Great Chromatics, ewoskas build collections of pilfered trinkets, gems, jewels, and magic items pulled from their own prey.

Keen Sight. The ewoska has advantage on Wisdom (Perception) checks that rely on sight.

Shrinking Shriek (1/Day). The ewoska shrieks, targeting a creature that it can see within 60 feet of it that can hear it. The target must succeed on a DC 11 Constitution saving throw or it shrinks. A shrunk target’s size is halved in all dimensions, and its weight is reduced to one-eighth of normal. This reduction decreases its size by one category—from Medium to Small, for example. Until the target returns to its normal size, the target also has disadvantage on Strength checks and Strength saving throws. The target’s weapons also shrink to match its new size. While these weapons are reduced, the target’s attacks with them deal 1d4 less damage (this can’t reduce the damage below 1). The creature remains shrunk for 1 hour or until a greater restoration spell or similar magic is cast upon it.