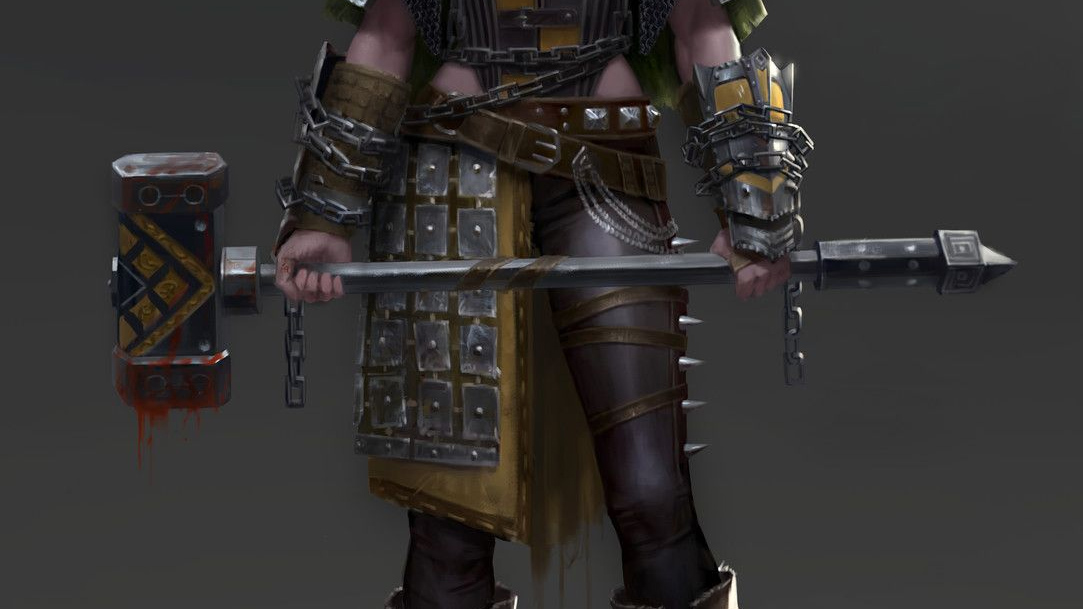 Anyways, I want to kick things off with wrath. I knew that I wanted it to be a weapon, and honestly, I couldn’t think of anything more wrathful than a hammer.

Got a request? It’s FREE! Learn more on the Request Information Page.

Forged in the fires of the Abyss and cooled in a pool of chaos on Limbo, the Hammer of Wrath is one of the Seven Deadly Sin Artifacts thought lost in the multiverse. It radiates pure rage, affecting the minds and souls of any who dare wield it.

Throughout history, the Hammer of Wrath has been seen at the front lines of titanic clashes. War and chaos gods alike have held the hammer, using it to collapse countless skulls. Some say the ghosts of thousands of dead linger in its presence, their souls destroyed by the overwhelming hatred that hangs around it.

Lacking any decoration, the hammer looks like a plain warhammer. It is oddly unbalanced, too, the majority of its weight held in its thick, stone head. The handle is rough to the touch, making the hammer somewhat painful to hold even for those attuned to it.

Magic Weapon. The Hammer of Wrath is a magic weapon that grants a +3 bonus to attack and damage rolls made with it.

Random Properties. The hammer has the following randomly determined properties:

Perpetual Wrath. If you are holding the warhammer, you gain the following benefits:

Anger Amplifier. If you are holding the warhammer and you have the rage feature, your Rage bonus damage is doubled and your rage only ends early if you fall unconscious. You cannot choose to end your rage early.

Inspire Frenzy. If you are holding the warhammer, you can use your action to drive creatures within 30-feet of you into a frenzy. Each creature in the area must succeed on a DC 18 Wisdom saving throw or become enraged until the end of its next turn. An enraged creature has advantage on melee weapon attack rolls, but attack rolls against the creature have advantage. You can’t use this property again until the next dawn.

Curse. The warhammer bears a curse that affects non-chaotic creatures that are attuned to it. With each passing week, a creature’s ethical alignment shifts one level towards chaotic; from lawful to neutral and then neutral to chaotic. Also, you cannot cast spells or concentrate on them while attuned to the hammer. The curse can be undone by any effect that removes a curse, such as a greater restoration or remove curse spell.

The PDF version of this item is available on my Patreon. For as low as $3 per month, you get unlimited access to PDFs of (nearly) everything created on this blog. In addition, you can make requests which move to the top of the request queue.

Get the PDF on Patreon.

Big shout out to my Patron, Jesse, who came up with this idea. Next up, I’ll be creating the Mask of Lust which should be fun. Haha!

If you’d like one of your requests made, be sure to check out the requests page.