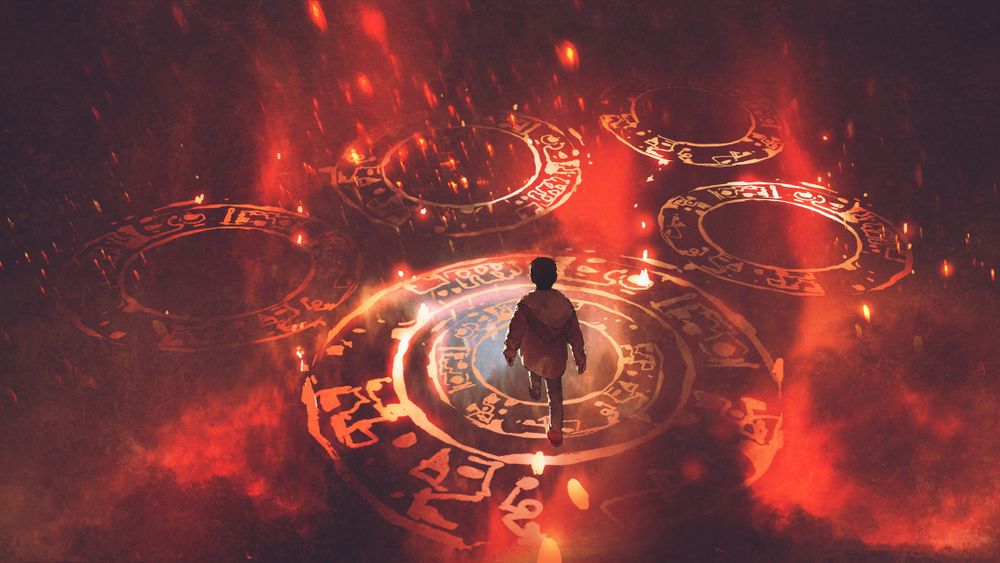 This request comes from another one of my Patrons, Brad. Here’s what Brad requested:

I recently went through an escape room with some of my gaming group, and I thought that it would be interesting to put out characters through an “escape dungeon” during a session. Could you do that as a mini-dungeon?

The general idea I came up with is a labyrinthine dungeon with a series of doors, all locked. The only way to get through each of the doors is by solving a riddle within. This is a throwback to old Gygaxian adventures as well as video games from the late-’80s/early-’90s like Shadowgate, Deja Vu, and Myst.

I thought I might cut this up a little bit since it takes a little more doing to create riddles (it’s more difficult than I thought it’d be!), but here’s the first part of it now.

As I create more of these rooms for my patrons (including Brad), I’ll add more rooms, but for now, this room can be added to any dungeon you like or easily inserted into a preexisting adventure.

Have something you’d like to see get made? Put in a FREE request!

The adventurers find themselves in a room with twelve statues. Each one depicts one of the twelve classes from the PHB (Barbarian, Bard, Cleric, etc).

You are in a large room measuring 35-feet-long east-to-west and 20-feet-wide north-to-south. There are twelve statues in the room, six on the northern wall and six more on the southern wall. Each looks like some sort of adventurer, its hand reaching out and curled as if it is supposed to be holding something.

In the center of the room on a simple, wooden table are weapons, twelve in all: a dagger, a dart, a greataxe, a handaxe, and javelin, a light crossbow, a longsword, a mace, a quarterstaff, a rapier, a scimitar, and a shortsword.

On the far western wall is a small table with a pivotable hourglass, all of its sand piled at the bottom. Just behind it are words scrawled onto the wall.

The weapons are props and not actually usable. A simple investigation check reveals this.

The riddle on the wall reads (feel free to create a handout for the players):

The tome of the fire giant
Offers clues to this weapon game.
No simple choice or martial
Only those specifically named.

Twenty minutes to solve the riddle
Or a quick exit you will find
Try to cheat without solving it
And all your possessions will be mine.

Once the riddle is read aloud, the hourglass magically flips over and the countdown begins.

Each of the twelve statues is dressed in the stereotypical clothing for its class and each is a human alternating between male and female. At the base of each of the statues is a plaque that identifies each statue: barbarian for barbarian, fighter for fighter, etc.

None of the statues are armed. In fact, they each have an outstretched hand where a weapon should fit. Even if the characters try to investigate the hands to determine what fits where no clear answer is apparent. For example, the sorcerer gets the light crossbow. However, he/she does not have both his/her hands positioned for a crossbow; instead, it looks as if any of the 12 choices would fit.

There are three doors in the room. For now, you can decide which of the three doors is the one that opens when the puzzle is solved and which door the characters originally entered through. The third door will open at a later time with another riddle or puzzle (or you can just remove it, up to you).

If you’d like to see the rest of the dungeon to see how this room fits, check out Dyson Logos’ blog: The Architect’s Dungeon. This room is to the right of Dyson’s signature.

It should be pretty obvious to the characters that they’ve got to place the weapons in each of the statue’s hands to open the door. But which weapon goes where?

The riddle references “the tome of the fire giant.” This, perhaps, is a little meta, but this is referencing the PHB (it’s got a fire giant on the cover). In the PHB, each class description lists the equipment that each class starts with. Determining which weapon goes with which class is simply a matter of deduction.

Which statue gets which weapon?

Here is the only solution to the puzzle:

Once all of the statues have the correct weapons in their hands, the door opens.

The moment the players/characters read the riddle on the wall, the hourglass starts. Similarly, you must time the players to see how fast they can solve the riddle so you may want to use an app on your cell phone or an egg timer. They have twenty minutes.

Note: I’ve set it for twenty, but it might need to be a little longer. We’ll see how it works out with playtesting. Feel free to change it yourself.

Should the players/characters not solve the riddle within the allotted time, they are magically transported to the start of the dungeon and have to start all over.

If you want to be really hardcore, you can make it so they only have a certain number of tries to solve the dungeon and its riddles. Or you can have the rooms reset with new riddles to really make it tough. Totally up to you!

The riddle says “Try to cheat without solving it / And all your possessions will be mine.” If the characters try to do anything to circumvent solving the riddle, the magic of the room will not only teleport them to the start of the dungeon, but it will also leave them all naked without any of their possessions. In fact, their gear and possessions are sent to the final treasure room. So, not only will they lost what they came with, but they’ll lose what they’ve found since they’ve been in the dungeon, too.

What is considered cheating?

The reward of opening the door might not be enough to keep the players happy (personally, I just tell them to shut the hell up and be glad I give them any of my attention in the first place, but that’s just me being a shitty GM).

This challenge is totally FREE for you to use in your personal campaigns. If you’d like a PDF version of the challenge, it’s available to all Patrons. For as little as $3 per month, you get all the PDFs PLUS get to move to the top of the request queue. Pretty cool, right?

Get the PDF on Patreon

This is just the first part of Brad’s request as I’ll be sure to create another room soon (just have to brainstorm an idea first, lol).

Hopefully, you can use this in one of your dungeons. Or, if you like, feel free to make a request similar to Brad’s and I can create another room.

If you’d like to learn more about requests, just head on over to the request page:

Put in a request with DMDave.

Art by Dyson Logos and Shutterstock (both used with permission).