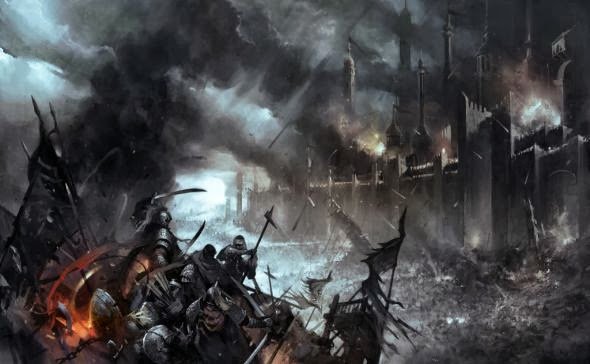 This is the third installment of the mass combat rules series. While writing the basic rules for the system, I realized that there were no rules for purchasing units. However, I think there’s a pretty easy way to do it as I’ll detail below.

This is an attempt to improve upon the mass combat rules that Wizards of the Coast released a while back, which is a little too simplified for its own good and kinda blah.

To keep the game balanced between the DM and the PCs, there needs to be some sort of unit purchasing system. The system can’t work the same as level versus CR from Fifth Edition, because the PC’s have allies on their side. It’s a war game at this level, therefore it should designed as such. In other words, the players could lose a battle and not be adversely affected (other than roleplaying repercussions, of course). Therefore the typical asymmetrical style of play is not necessary.

Fortunately, we’ve got a rough model within the CR and XP system that can help me figure out what to price out units.

Since the units more or less scale in a linear fashion, the best (and probably crudest) way is to use the unit’s XP as purchasing points. The other thing to consider is that the armies must be balanced in unit size. If they aren’t, we need to defer to the Encounter Multiplier table on page 82 of the DMG.

Here’s why. Consider this situation: two armies have 700 points to spend on their troops. The DM is playing goblins and buys 14 units of goblins. The player is playing humans and buy 1 unit of knights. Which is better? Obviously, the goblins, because they are way more powerful.

If we do a little math using the Encounter Multiplier table, we know that roughly 6-7 goblins are in line with 1 knight.

Therefore, armies must be purchased in “battalions” that roughly equal the same XP.

A battalion can equal 1 or more units. Now we don’t have to use any sort of XP. We just say that you can purchase X number of battalions for your battle.

So a battalion of 4 knights units would normally have an encounter XP cost of 5,600. If we use that same budget to purchase a battalion of nothing but goblins, we’d have 28 goblins in the battalion.

That seems kinda nuts, right? Of course, knights are pretty tough, so I’m sure the math checks out (and probably looks cool AF when played out).

But what we can do is mix up the types of creatures in the battalion. So instead of just 28 goblin battalions, we’ve got 10 units of goblins, 5 units of gnolls, and a 1 unit of ogres. We can probably divide things up a bit more, too. We can take 2 of the goblin battalions and mount them on worgs. And then we’d have 4 units of goblins. We’ve lost some of our goblin units so our Encounter Multiplier will drop, so I’m going to toss in another ogre unit. It all adds up to 5,700 XP, just a little more than the knights.

So the humans have a battalion consisting of:

And the goblins have a battalion consisting of:

So in theory, these are two pretty well-balanced armies. If it doesn’t seem that way at first glance, remember that the knights have some pretty strong AC, they’ll have 10 unit hit points each (for a grand total of 40), and they can deal 4 unit damage in a round (for a grand total of 16).

When incorporating an individual creature, I’ll probably want to reverse engineer a unit as if it were the finished result of a mass combat unit template.

I can do this by first dividing the creature’s hit points by 20 and round up. That’s its unit hit points. And then, I have to remultiply that number by 5. So for example, if I do this with a Frost Giant, I end up with 35 hit points.

Next, I have to do the same thing with its attack. When using the optional huge/gargantuan rule for big creatures attacking smaller units, we can take the individual creature’s average attack and divide it by 8. Then, we multiply that number by 5. So for our frost giant, we end up with 15 average damage per round.

Those two numbers will help us build our “mini-creature”. Think of it this way: if the individual creature were a unit, the end result would be one member of that unit.

All we have to do now is plug those numbers into the monster statistics by challenge rating chart to come up with our experience cost. Our frost giant has immunity to cold, so that doubles its virtual XP to 70 which bumps further because of its 15 AC. This puts it at a defensive CR of 1. Next, I take its 15 damage and then bump that up 3 times to CR 5 since it has an attack bonus of +9. The halfway point between those two CRs is 3, so the “mini-Frost Giant” is a CR 3 creature.

Therefore, an individual frost giant has a cost of 700 XP in battle. In other words, a unit of knights can stand toe-to-toe with one frost giant.

Okay, thanks for bearing with me while I worked out all the math. Here’s pretty much everything I figured out for purchasing units.

Calculating the cost of heroes

Of course, there are other factors to consider here, too, such as players and heroes. But the same rules apply. Since heroes get actions, I feel like it makes sense to double their mass combat XP cost (for now at least) once I figure out what it is.

First, determine the player’s unit hit points. So if a 9th-level Fighter character has 60 hp than its virtual hit points will be 15 for the purpose of calculating its mass combat CR. However, the fighter has no abilities that allow it to affect units, but it can use its Intimidation power to challenge a unit’s commander and fight it individually. I don’t see this happening a lot, but I think it probably warrants at least 5 virtual damage per round. The fighter’s wearing plate and is carrying a shield and its attack bonus is +11. So its mass combat CR is 2, making it worth 450 mass combat XP.

If an individual creature can deal area of effect damage, then it will need to be calculated differently. Let’s say that a wizard has 3 fireballs in its arsenal. Each fireball deals an average of 28 damage–or 5 unit damage. However, the average battle should last close to 10 rounds. That means the wizard will get an average of 1.5 unit damage from its fireballs. Then, the wizard still has four uses of burning hands. Burning hands, on average, will hit roughly half a unit. That’s worth at least 1 unit damage. So that’s another 4 damage. And so on until we’ve mapped out the most damage the wizard can do each round. Then, we factor in its hit points and determine its mass combat CR just as before.

This is something else I’ll probably make a chart for just to make life easier.

Okay, so here is a summary of what I’ve added here:

In addition to all this, I should consider the advantage that high Charisma characters have in mass combat since they can control so many units. Each Charisma modifier is probably equal to a bump in XP modifiers. Or at the very least, the two armies should be able to match one another with leadership points.

A leadership point will probably be 1 + the hero’s Charisma modifier (minimum of 1).

Because the range of leadership is limited, I’ll probably need to toss in some sort of multiplier there, too, similar to the way that building encounter XP works.

Thanks for reading my ravings!

Sometimes, when I’m working on a new set of rules, it’s a lot better if I just write it all out so I can have it in front of me.

Now that I’ve got all this out, I just need to take it and translate it all into rules.

Let me know what you think in the comments!

And you haven’t already, be sure to grab a copy of the Improved Mass Combat Rules PDF that introduces the first part of the rules.