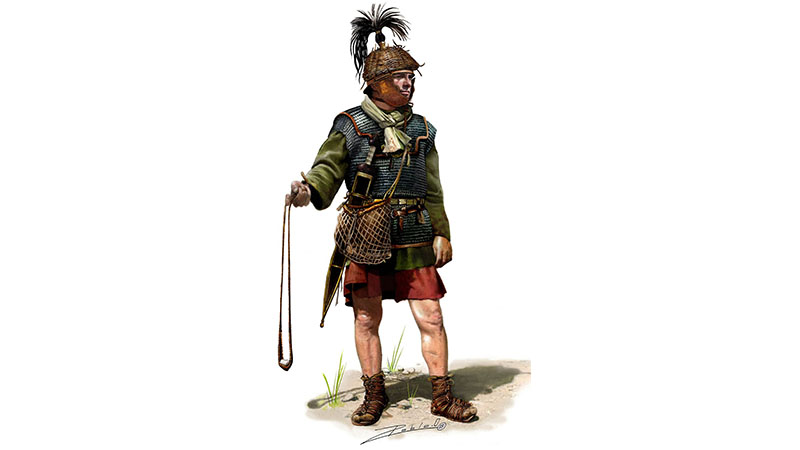 This one comes from Patron requests. Here’s what was asked:

My DM HATES slings. I’d love to have a way to use slings that doesn’t totally gimp my character.

Pretty weird that the guy would hate slings, but I understand weird hangups (I personally hate horses! Grrrr).

I thought about it for a minute and thought, why not expand upon the basic idea of slings?

So what do we know about the sling? Let’s break it down:

In addition to the sling itself, there are a couple of feats that can buff it.

Let’s take a look at the sling’s history. This comes from the site Rome Across Europe (bold emphasis mine in a few areas):

“A sling is a projectile weapon typically used to throw a blunt projectile such as a stone, clay, or glandes plumbeae (lead sling-bullet). Also known as the Shepherd’s Sling, this personalized weapon has a small cradle or pouch in the middle of 2 lengths of cord.

“The sling was inexpensive and easy to build. It has historically been used for hunting game and in combat.

“A classic sling is braided from a non-elastic material. The traditional materials are flax, hemp or wool; those of the Balearic Islands were said to be made from a type of rush.

“Flax and hemp resist rotting, but wool is softer and more comfortable. Braided cords were used in preference to twisted rope, as a braid resists twisting when stretched and thus improving accuracy.

“The overall length of a sling varied based on the range a slinger needed to hit, with a longer sling being used when greater range was required. An average sling would be about 2 to 3.28 ft in length.

“At the center of the sling was a cradle or pouch. This was either formed by making a wide braid from the same material as the cords or by inserting a piece of a different material such as leather.

“At the end of one cord (called the retention cord), a finger-loop was formed, while at the end of the other cord (the release cord,) it was a common practice to form a knot or a tab. The release cord will be held between finger and thumb to be released at just the right moment.

“The simplest projectile was a stone, preferably well-rounded, and most likely from a river. The size of the projectiles varied dramatically, from pebbles massing no more than 1.8 oz to fist-sized stones massing 18 oz or more.

“Projectiles could also be purpose-made from clay, which allowed for very high consistency of size and shape to aid range and accuracy. Many examples have been found in the archaeological record.

“The best ammunition was cast from lead (looking like an almond) which were widely used in the Greek and Roman world. For a given mass, lead, being very dense, offers the minimum size and therefore minimum air resistance.

“Why the almond shape was favored is not clear, but it may provide some aerodynamic advantage. Itś just as likely that the shape was easy to extract from a mold, or it would rest in a sling cradle with little danger of rolling out.

“As a reminder of how a sling might strike without warning, examples of symbols included a stylised lightning bolt, a snake, and a scorpion. Writing might include the name of the owning military unit or commander or might be more imaginative: “Take this,” “Ouch,” and even “For Pompey’s backside” added insult to injury, whereas dexai (“take this” or “catch!”) was merely sarcastic.

“Julius Caesar writes in De bello Gallico, Book 5, about clay shot being heated before slinging, so that it might set light to thatch.

“A skillful throw requires just one rapid rotation. Some slingers would rotate the sling slowly once or twice to seat the projectile in the cradle.

“One made an overhand throw in a motion similar to [pitching a baseball]. This is relatively accurate, instinctive and quite powerful.

“Facing 60 degrees away from the target, with slinger stood with his non-throwing hand closest to the target. With the target at the 12 o’clock position, a right-handed thrower would orient his body toward 2 o’clock, with the arm rotating vertically in the 12 o’clock plane.

“The coordinated motion was to move every part of the body (legs, waist, shoulders, arms, elbows, and wrist) in the direction of the target in order to add as much speed as possible to the stone. The slinger released the projectile near the top of the swing, where the projectile would proceed roughly parallel to the surface of the earth.

“There were also sideways releases, in which the swing goes around. However, these throws made it very easy to release the projectile at a slightly wrong time and miss the target.

“As a weapon, the sling had the advantage of its bullet being lobbed in excess of 1,300 ft. A bow and arrow could also have been used to produce a long-range arcing trajectory, but ancient writers repeatedly stress the sling’s advantage of range.

“The Roman slingers would have exacted a heavy toll, for recent experiments conducted in Germany showed that a 50-gram Roman bullet hurled by a trained slinger has only slightly less stopping power than a .44 magnum cartridge fired from a handgun. Other tests revealed that a trained slinger could hit a target smaller than a human being from 130 yards away.”

Okay, wow. That’s a lot of cool shit. And it makes me wonder why slings got nerfed so much. I guess the game needed a cheap weapon that any dodo could use and “rope with rock” sounded like it hit the spot.

Right away, I know a few things that I want to do with this awesome weapon:

Cool. This is exciting!

I took a few cues from the Weapon Expert build I did not too long ago. First, I created some new sling bullets based on the historical information I listed above. The stone bullet was just a way to find cheap, free stones and gives some rules for such.

Because of the increased damage and range on the other two bullets, I had to make them martial weapons. Mithril’s cost is roughly 1/5 of what +1 ammo would cost as it only gives a +1 to attack rolls and not to damage and as ammunition, you’ll end up losing half of it every time you use it.

The two feats are no-brainers.

Because of the niche nature of sling master, I gave it a Dex bump. It increases critical damage by an extra die, but that’s barely a blip. Effectively, it’s an additional 0.275 damage per turn even with mithril, nothing to write home about. Also, I tossed in the martial proficiencies for wizards and sorcerers who plan on picking up this feat.

Arcane slinger allows a caster to learn a relevant cantrip, then cast it on sling stones. I changed acid splash’s ability a little, borrowing from oozes, but the rest are more or less the same. Some will be better with the sling (such as shocking grasp), while others which already have a pretty long range might suffer. That’s for the caster player to decide themselves.

The optional rules in this article pertain to using slings in the game.

In addition to the clay bullets normally offered in the PHB, a character has the following sling ammunition available to them.

* Stone bullets are not purchased but found. While foraging outdoors near a river or similar body of water, a character can make a DC 10 Wisdom (Survival) check to find 20 stone bullets. Certain environments such as a natural cave or outdoors might also provide stones for the sling. These can be found with a successful Search action, DC 10 Wisdom (Perception).

† Due to the improved aerodynamic properties of mithril bullets, a character proficient with mithril bullets receives a +1 bonus to his or her attack roll on attacks made at normal range.

This section introduces a collection of special feats that allow you to improve the use of a sling. The feats are presented below in alphabetical order.

Prerequisite: The ability to cast at least one spell

You have learned techniques to enhance your sling attacks with certain kinds of spells, gaining the following benefits:

You gain the following benefits:

Art by Rome Across Europe.