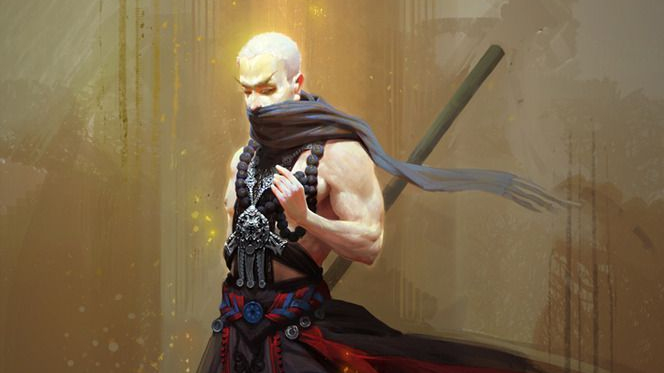 Good morning! This one comes in as a request from one of my patrons. Here is what he asked for:

At first I saw [a monk subclass] as drawing power based on the position of the moon, but I feel like that would be a lot for the DM to up with. Maybe a cross between Way Of The Shadow and some magic based on constellations (If that’s even a thing)? Haha

I think that sounds pretty nifty! But he’s right, it might be too niche. The earth’s moon is very specific to the earth itself and only functions the way it does because of tidal locking which is kinda rare. In a fantasy world that doesn’t have a moon or potentially multiple moons, it may not function the same.

Still, the idea of a Monk that bases its strategy on the moon could be pretty cool.

The circle of the moon druids are probably our best concept of how “moon” could affect things in the game. And let’s not forget lycanthropes.

Perhaps we can learn a little of those themes.

Circle of Moon Druids are all about the Wild Shape and lean heavily on that aspect of the Druid’s repertoire. It especially focuses on the changeability of the moon.

As far as lycanthropes go, there are five main types of lycanthropes in the MM: werebears, wereboars, wererats, weretigers, and werewolves.

Also, here’s a quick analysis of the monk subclasses (for my benefit as much as yours):

So when working on this Way of the Moon monk, I think I want to do a few things:

The one thing that gives me a headache when dealing with monks is how much freakin’ math has to go into planning them out. They work with a ton of attacks and have lots of little ways to gain advantage. It’s a pain in the booty.

Either way, I think I did a pretty good job making this subclass work with what I was going for. Interestingly, I noticed that the power balance on some of the subclasses crescendos at 11th level. 17th is sort of a “clean up” for those monks. Although, on a couple ocassions, it is one of the monk’s 17th power abilities that deals all the damage, notably with its cone of cold at 17th for 4 elements and then quivering palm at 11th.

At 3rd level, the Moon Monks get fist of the new moon. This works similar to the Assassin’s ability to score advantage on its first turn. But does the damage boost work out the same way as other monk subs? Math time!

The moon monk gets a crit on one of its unarmed attacks made with flurry of blows. So that’s 2.5 extra damage at 3rd, 3.5 extra damage at 5th, 4.5 at 11th, and 5.5 at 17th. This bonus is only once per combat, so spread out over the three-round average of combat, that’s only about 1 point of extra damage per turn to a maximum of 2ish at 17th. Plus, it only works with FoB which is powered by ki. Using the Fighter Fighting Styles as our “rosetta stone” for game balance, we can determine that a +1 AC bonus (which Kensei offers) is roughly on par with a +2 bonus to damage. So I think we’re in the clear there.

Crescent kick is meant to pave the way for flurry of blows to get advantage. It’s a 6th level power, so here’s how that works out mathematically:

Going back to Kensie, the Deft Strike power lets you spend 1 ki point to deal extra damage to the target equal to the martial arts die. As you can see from the math above, that’s almost the exact same thing being offered here, albeit slightly behind by a small fraction. However, that fraction is made up for by combining it with the first level power that lets you hit with a critical hit on the first round. BOOM! Math, baby!

Next up, is the big 11th level power which lets you make a charge attack to start things off. This damage is in line with the searing burst ability. And here’s how:

Finally, 17th might seem weak, but like I noted above, it’s job is to clean up. Basically, if you can’t get the first round of attack, you can instead mark your target by having it hit you. A wise monk will use the Dodge action against this target and then lay in on it once it has the upper hand. Note that it doesn’t have a cost. The reason being is that the opportunist class allows you to use a reaction to make a melee attack against a creature. Everything else in this class was driven by ki, so I didn’t want to do it again. Therefore, I based it on the Shadow monk’s opportunist power that lets you use your reaction to hit a creature other than yourself. At 17th, that’s the equivalent of 10.5 damage (or really 5.6 if you multiply it times the chance to hit, or 8.82 if you have advantage. Using our “Fighting Style Rosetta Stone” again, a +1 to AC = a +2 to damage = a +2 to hit. Therefore, breaking it out the same way eats up all the “virtual damage” that the Opportunity power does, if that makes sense. While a little off, its made up for in the fact that it only applies to a single target.

At 3rd level, a monk gains the Monastic Tradition feature. The following Way of the Moon Soul option is available to a monk, in addition to those normally offered.

The Way of the Moon Soul

Monks of the way of the moon soul are strong, capable warriors, who use their cycle style of fighting to chain powerful attacks. Their stoic nature keeps them in a calm state of constant meditation, allowing them to be unflappable in the face of danger.

Fist of the New Moon

Starting when you choose this tradition at 3rd level, you can catch enemies off guard with a powerful opening strike. Whenever you hit a creature that hasn’t taken a turn in combat yet with one of the attacks granted by your Flurry of Blows, the first hit you score using it against that creature is a critical hit.

At 6th level, your powerful opening strikes can be used to expose your enemy to the rest of your attacks. When you use the Attack action with an unarmed strike or monk weapon on your turn against a creature within 5 feet of you, you can spend 1 ki point to give yourself advantage against that creature until the end of your turn.

At 11th level, if you move at least 10 feet straight toward a target and then hit it with an unarmed strike or monk weapon on the same turn, you can spend 1 ki point to have the target take an extra 1d10 damage from the attack.

You can increase the strike’s damage by spending ki points. Each point you spend increases the damage by 1d10. The maximum number of ki points (the first 1 plus the additional points) that you can spend on the feature is 6.

You can use this feature only once on each of your turns.

At 17th level, when a creature targets you with an attack, as a reaction you can mark that target. While the target is marked, you have a +2 bonus to your AC, attack rolls, and damage rolls against that target. The target remains marked for 24 hours, until it dies, you are incapacitated, or you mark another creature using this feature.