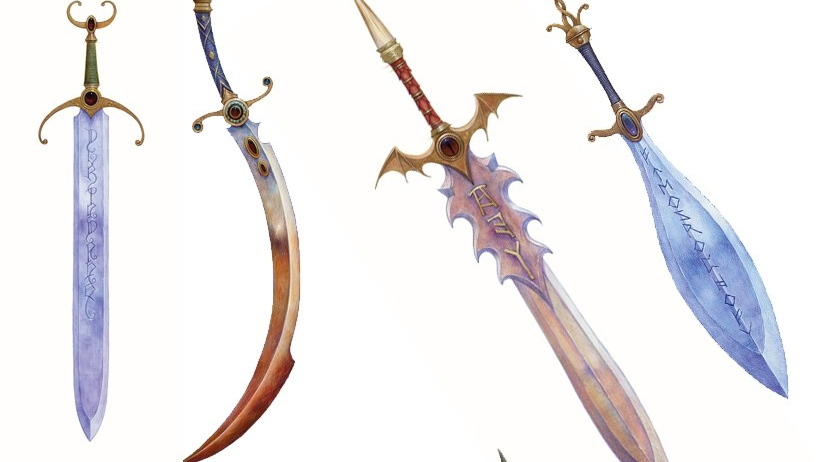 “Weapon of legacy” describes all the items created using the rules in this article, even those that wouldn’t normally be described as weapons (such as rings or shields). Usually, this article uses the more general term “item of legacy” or “legacy item.”

An item of legacy has the capacity to grow in power as its wielder advances in level. In addition, it confers increasingly powerful special abilities on its wielder. That character might carry and treasure the same item over her entire career as a hero (or villain).

Why not? As her own talents and abilities progress, so too do those of the legacy item, assuming the wielder takes the time to learn its complete history and awaken its quiescent power with the appropriate rituals.

As a player character, you could discover or inherit an item of legacy. Initially, it might
seem like nothing more than a standard magic item. Only when you learn something of its past do you begin to understand that this object has untapped potential. By uncovering the item’s full history, you can discover the keys that unlock the item’s full power.

Every item of legacy is distinct from the next, and each has its own unique story. Unearthing that story (or creating it, when founding an item of legacy) allows you to gain the full benefits of the item. For example, the story of Caladbolg, which appears only
when a great hero has need of it, contrasts sharply with that of Stormchaser’s Cudgel, whose heritage involves the murder of the weapon’s original owner, Suldan Kabrel the giant slayer.

Why use Weapons of Legacy?

If you’re a DM, items of legacy provide exciting rewards for players whose characters are willing to devote time and energy to learning about your campaign world. To unlock the powers of a legacy item, a player character must learn fabled legends of ancient history and complete rituals of mythic significance. Not only does this require the player to study the “backstory” of your world but also provides any number of ready-made adventure hooks for the campaign.

If you’re a player, a legacy item presents a way of personalizing your character while simultaneously building up her might. By tying her development to one of the great tales of history, your character takes on heroic proportions. Who knows? She might even become more famous than the first owner of the legacy item, unlocking powers of even greater potential.

Refer to this section if you have questions about a legacy item’s presentation.

The name of the legacy item is followed by a description of the item’s appearance and easily observed abilities. Unless you succeed on the DC 15 Intelligence (History) check concerning the item, its name isn’t automatically evident.

This entry contains information that can be gleaned by inspection and with an identify spell. The cost listed here is for a normal magic item of the legacy item’s kind, its true status remaining unknown. All legacy items require attunement.

Every legacy item has a history, which is often obscured by a gulf of time. Learning a piece of an item’s past requires a character to spend downtime researching it (see page 132 in Xanathar’s Guide to Everything for details).

These research checks do not have to be made by the prospective wielder of the item. The information gained by the research must be accurately communicated to that person, however, because making the relevant Intelligence (History) check also uncovers the ritual associated with part of the item’s legacy. The pieces of lore and the ritual gleaned from a successful check appear parenthetically at the end of each relevant paragraph in an item’s history.

A legacy ritual has an associated cost in gold pieces, which is listed here.

Legacy items have more requirements than simply gaining the associated legacy feats. Such requirements are listed here, much like the prerequisites for entering a prestige class.

These requirements do not affect your ability to use the nonlegacy abilities of the item.

Every legacy item is described in terms of a table that lays out conferred abilities according to the following information.

The abilities conferred by a legacy item are explained here. In general, using legacy items’ abilities requires you to at least carry the item on your person. This default rule has some exceptions, which are clarified in the specific entries to which they apply.
Unless otherwise noted, activating a legacy ability costs an action. The save DC for any legacy ability is equal to 8 + your proficiency bonus + your Charisma modifier. If the legacy item casts a spell, you can instead use your normal spellcasting ability modifier instead of your Charisma modifier if the result would be higher.

The feats described here are granted to a character who fulfills the rituals required to awaken the corresponding powers of an item of legacy.

Choose one item of legacy. If you meet the other prerequisites for wielding that item, you can use any of its lesser legacy abilities that are available to a character of your level. Least legacy abilities are those granted between 11th and 16th level.

The following item is a legacy item for you to use in your campaign.

Spidersilk is a mithral shirt of exceptionally fine texture and quality. Black threads of spider silk appear to have been woven in among the metal rings. At 5th level and before its true nature is discovered, it counts as a +1 mithril chain shirt. As you unlock its legacy abilities, its AC bonus increases by +1 at 11th level (+2), and again at 17th level (+3.

Spidersilk was originally the armor of the legendary drow wizard Valenet. About four hundred years ago, he received it as a gift from Dierdra, his house matriarch, for slaying a mind flayer that had held her in thrall. The matriarch lavished training and resources upon the young male drow, educating him in the care and riding of spiders as well as the wizardly arts. (First piece of lore; Knowledge of the Spider)

No other male was as pampered or as powerful as the matriarch’s young savior, and Valenet enjoyed his privileged status. But among the drow, jealousy is easily aroused and
quickly manifests in violence. After another drow nearly killed Valenet in a duel, Dierdra forbade anyone to challenge him. Valenet subsequently survived several assassination
attempts, thanks largely to Spidersilk. Eventually, however, he died from drinking a cup of wine poisoned with spider venom. Dierdra buried Valenet dressed in this armor. (Second piece of lore; Test of the Fang).

The odds that the grave of one so envied and hated by other drow would lie undisturbed were slenderer than the finest spider silk. In fact, grave robbers opened Valenet’s tomb and made off with Spidersilk mere hours after the stonemasons had sealed it. Many unverified accounts of the armor indicate a profusion of owners during the next three hundred years.

Legend holds that it was worn by surface dwellers such as Yew, a cleric of Obad-Hai, who was credited with ridding the Yellow Wood of spiders. Occasionally, however, it was
brought back to the Underdark and sold back to the drow as finely crafted armor. Most who wore the armor remained ignorant of its true capabilities. (Third piece of lore; The Still and Patient Spider)

Three rituals are required to unlock all the abilities of Spidersilk.

Test of the Fang. You must be bitten by a spider of at least Large size and survive the poison without recourse to magical assistance. Thus, a slow poison or neutralize poison spell would negate the test, but a nonmagical resource, such as a vial of antitoxin, is acceptable. Cost: 13,000 gp; Feat Granted: Lesser Legacy (Spidersilk).

The Still and Patient Spider. You must spend one day per character level in meditation with Spidersilk. At least 8 hours of each day must be spent meditating, and you cannot engage in any strenuous activity or spellcasting during this period. Cost: 40,000 gp; Feat Granted: Greater Legacy (Spidersilk).

The optimal user of Spidersilk is an elf wizard, although any arcane spellcaster might use it. Bards, multiclass rogues, and other lightly armored spellcasters such as warlocks or sorcerers might also embrace Spidersilk as an opportunity to expand their repertoire of abilities.

All the following are legacy item abilities of Spidersilk.

False Life. Beginning at 6th level, you can cast false life once with this ability and regain the ability to do so when you finish a long rest.

Spiderfriend. At 7th level, you are constantly protected from attacks against spider and spiderkin. Any spider or spiderkin (such as an ettercap or drider) who targets you with an attack or a harmful spell must first make a Wisdom saving throw. On a failed save, the creature must choose a new target or lose the attack or spell. This ability doesn’t protect the warded creature from area effects, such as the explosion of a fireball. If you attack an affected spider or spiderkin, the effect ends for that creature.

Summon Spiders. At 8th level, you can summon up to two spiders of CR 1/2 or less (but not swarms) which appear in unoccupied spaces that you can see within 60 feet of you. The summoned spiders are friendly to you and your companions. Roll initiative for the swarms as a group; the swarms act on their own turn. They obey any verbal commands that you issue to them (no action required by you). If you don’t issue any commands to them, they defend themselves from hostile creatures, but otherwise, take no actions. Once you use this ability you can’t use it again until you finish a long rest.

Web. Starting at 10th level, you can cast web. You can use this ability three times, and regain all expended uses when you finish a long rest.

Spiderclimb. At 12th level, you permanently gain the benefits of the spider climb spell.

Potent Concentration. When you reach 13th level, you can add your Charisma modifier to Constitution saving throws to maintain your concentration when you take damage.

Maximized Spells. Starting at 15th level, you can increase the power of your simpler spells. When you cast a spell of 1st through 5th level that deals damage or heals hit points, you can deal maximum damage or heal maximum hit points with that spell. After you use this ability, you can’t cast spells other than cantrips until the end of your next turn.

You can only use this ability three times. You regain all expended uses when you finish a long rest.

Spell Storing. At 18th level, you can store up to three spells in Spidersilk as if it were a ring of spell storing.