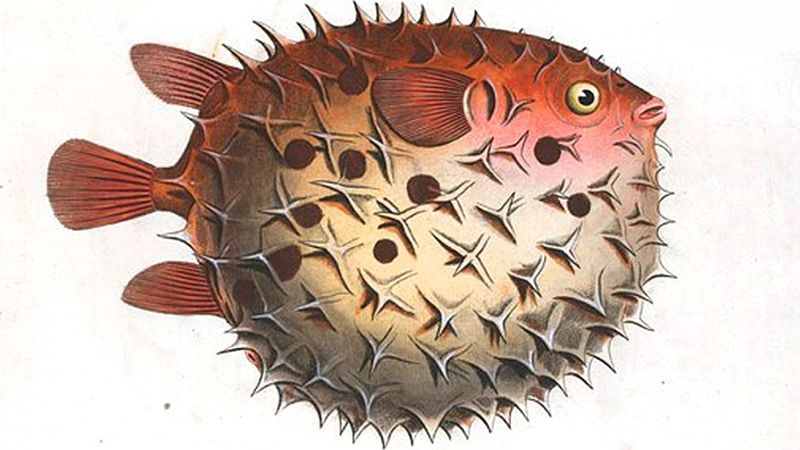 The kalothagh, also known as the prickleback, is an aquatic version of the manticore. Though sluggish and not particularly aggressive, the kalothagh is a known man-eater, which makes it a creature to be avoided.

The kalothagh is a plump fish resembling a pin cushion. Its body is covered with four-foot long spines. Its scales are mottled with dull splotches of green and brown. It has small black eyes that bulge from the top of its head, translucent fins, a dark, fan-like tail. and a smooth, pink belly. Its sharp teeth protrude from its mouth to form a small beak.

Kalothagh can be found in most oceans, though they prefer warm waters to cold. They make crude lairs in underwater caves or depressions in the ocean floors and line them with shiny gems collected from sunken ships or stolen from the treasure caches of other ocean dwellers. Kalothagh seldom stray more than a mile or so from their lairs.

The kalothagh has little commercial value – in fact, sailors consider a belly-up kalothagh floating on the surface to be an omen of economic disaster. Because of the weak poison that permeates its body, the kalothagh is inedible. Certain primitive tribes carefully snap the spines from dead kalothagh and use them for weapons. Some have attempted to use their air bladders as containers for liquids, but the bladders tend to decay within a few weeks after removal. The carnivorous kalothagh subsists on all varieties of prey.

Spine Covered. A creature that touches the kalothagh or hits it with a melee weapon attack while within 5 feet of it must succeed on a DC 12 Dexterity saving throw or become grappled (escape DC 12). Until the grapple ends, the creature is restrained. While restrained, the creature takes 2 (1d4) piercing damage at the start of each of its turns and must succeed on a DC 12 Constitution saving throw or become poisoned for 1 hour. If a creature’s Constitution saving throw versus this poison is successful or the effect ends for it, the creature is immune to all kalothagh’s poison for the next 24 hours.

Underwater Camouflage. The kalothagh has advantage on Dexterity (Stealth) checks made while underwater.

Water Breathing. The kalothagh can breathe only underwater.

Spines. Ranged Weapon Attack: +4 to hit, range 30/90, one target. Hit: 16 (4d6+2) piercing damage. If the target is a creature, it must succeed on a DC 12 Constitution saving throw or become poisoned for 1 hour. If the creature’s saving throw is successful or the effect ends for it, the creature is immune to all kalothagh’s poison for the next 24 hours.