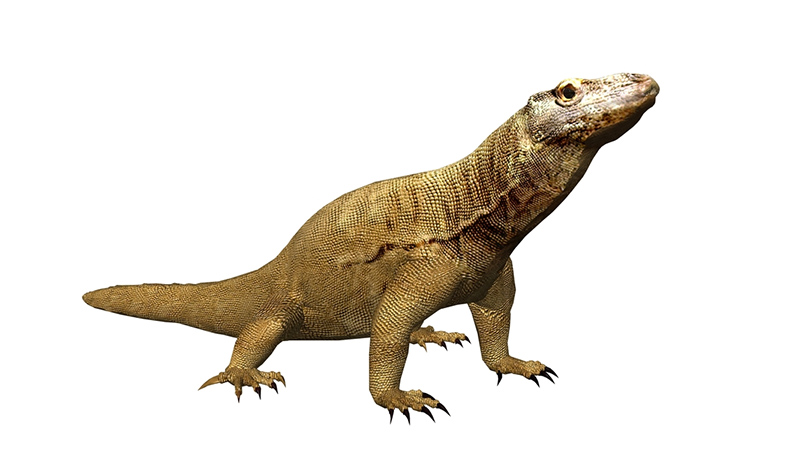 The Komodo dragon is a large lizard that prefers hot and dry places and typically lives in dry, open grassland, savanna, and tropical forest at low elevations. It is most active in the day, although it exhibits some nocturnal activity. Komodo dragons are solitary, coming together only to breed and eat.

They are capable of running rapidly in brief sprints up to 12 mph, diving up to 15 ft, and climbing trees proficiently when young through use of their strong claws. To catch out-of-reach prey, the Komodo dragon may stand on its hind legs and use its tail as a support. As it matures, its claws are used primarily as weapons, as its great size makes climbing impractical. An average adult male will weigh 174 to 201 pounds and measure up to 9 feet in length, while an average female will weigh 150 to 161 pounds and measure 7-and-a-half-feet long.

The Komodo dragon has a tail as long as its body, as well as about 60 frequently replaced, serrated teeth that can measure up to 2.5 cm (1 in) in length. It also has a long, yellow, deeply forked tongue. Komodo dragon skin is reinforced by armored scales that function as a sort of natural chain-mail. This rugged hide makes Komodo dragon skin a poor source of leather.

Keen Smell. The Komodo dragon has advantage on Wisdom (Perception) checks that rely on smell.

The Komodo dragon will be included as a Dungeons & Dragons Fifth Edition entry in a new book I’m working on for DMsguild.com titled, simply, CR 1/8.

If you like the Komodo dragon’s stat block, then get the word out by sharing it. Click one of the buttons below.