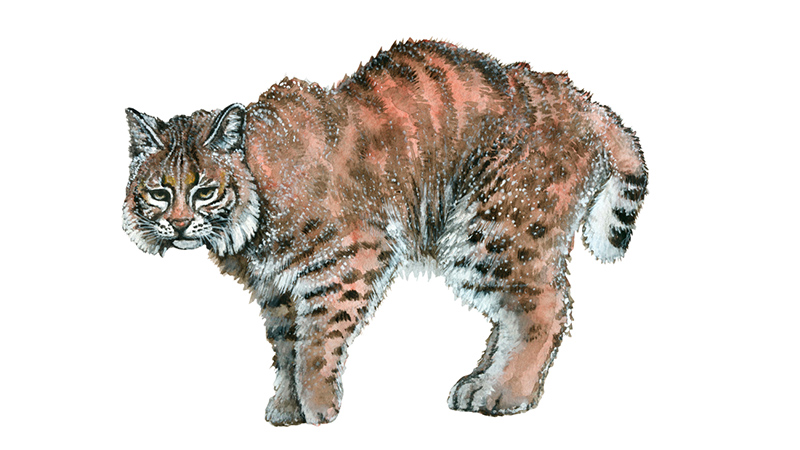 The bobcat is an adaptable predator that inhabits wooded areas, as well as semi-desert, urban edge, forest edge, and swampland environments. With a gray to brown coat, whiskered face, and black-tufted ears, the bobcat resembles a lynx, although smaller on average. It has distinctive black bars on its forelegs and a black-tipped, stubby (or “bobbed”) tail, from which it derives its name.

Though the bobcat prefers rabbits and hares, it hunts insects, chickens, geese and other birds, small rodents, and deer. Prey selection depends on location and habitat, season, and abundance. Like most cats, the bobcat is territorial and largely solitary, although with some overlap in home ranges. It uses several methods to mark its territorial boundaries, including claw marks and deposits of urine or feces.

Keen Smell. The bobcat has advantage on Wisdom (Perception) checks that rely on smell.

Pounce. If the bobcat moves at least 20 feet straight toward a creature and then hits it with a claw attack on the same turn, that target must succeed on a DC 11 Strength saving throw or be knocked prone. If the target is prone, the bobcat can make one bite attack against it as a bonus action.

The bobcat is another Dungeons & Dragons Fifth Edition entry in a new book I’m working on for DMsguild.com titled, simply, CR 1/8.

It will be available for free download and read until the book is published (probably by the end of this week).

If you like the bobcat stat block, then get the word out by sharing it. Click one of the buttons below.