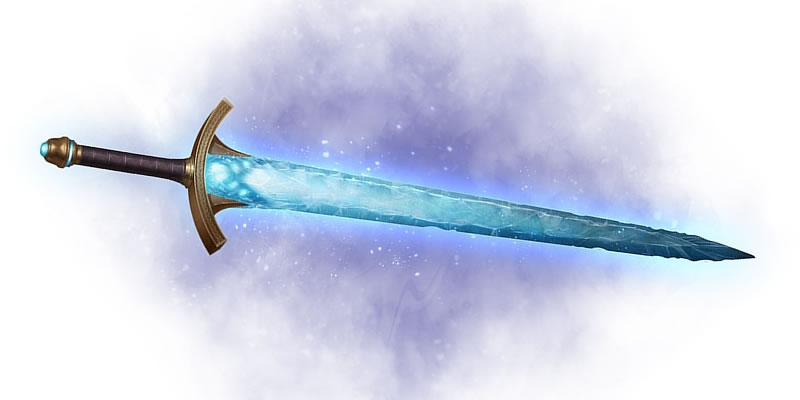 Oddly, this is one that I get a lot of requests for. But an official request recently came in from no less than two patrons. The concept is simple: a weapon that gains levels as you do. Can it be done?

Here are my notes for the build.

Fortunately, Unearthed Arcana just dropped some pretty killer rules for Sidekicks. And this makes for a great model on how to do this.

Now, I’ll be honest. This isn’t my first official attempt at making magic items that can level. I tried it with armor recently, but the trouble I ran into is that coming up with twenty levels worth of upgrades on a magic item was pretty tough.

A +1 weapon is uncommon.

It doesn’t matter if it’s a dagger or a greatsword, the rarity stays the same.

To go beyond very rare, we need a weapon that hits the legendary status. And what’s better than the ol’ vorpal sword?

Here is what makes the vorpal sword legendary:

So now we know what a legendary weapon is capable of.

Another thing to consider with these weapons is that they are all magic weapons. This means that they overcome resistances that have the nonmagical weapons stipulation.

Okay, so at what levels to characters get magic weapons? For that, we can turn to Xanathar’s to get an idea of the milestones. On page 135 there is an awarding magic items chart at the bottom of the page. All we have to do is tie each of the weapons to classes.

Something to note is that the number of items is for a party and not just an individual character. So we’ll have to make a few adjustments.

Here’s how it shakes out for magic weapons:

Okay, this gives me an idea for our weapon’s tiers in accordance with the character’s levels:

After going back and forth a few times, I decided to have the bonus bumps go along with the traditional player tiers. At 3rd, the weapon becomes “magical” which is roughly in line with Paladin’s Sacred Weapon and Warlock Pact of the Blade. I might limit its usage as a magic item, but I don’t think it’ll break things too much if it’s not.

Rare comes in at 7th because it would have been too powerful at either 8th or 9th. 8th the character gets its second ASI, which is probably going to go to its main damage dealing ability, allowing it to hit 20 in the score, and 9th is a proficiency bonus bump. For the martial classes, 7th tends to be somewhat of a “wasteland”, so I didn’t think it’d mess things up too bad.  Plus, the rapid succession of bonuses will keep the player invested in the item.

Okay, now all I have to do next is bridge the gap between the tier bumps. I can’t add too many nifty abilities, because too much would push the weapon beyond its rarity.

Sidekicks are relatively easy to scale because they have both ASIs and proficiency bonuses to fill up the ranks. ASIs take up a full 7/20 levels for both the Expert and Warrior sidekick classes. Both then fill the rest of the ranks with nifty little powers that make sense for it.

I suppose the same could be done with a magical weapon.

So there are a few options here to fill up our class options:

So here’s my breakdown so far (and thanks for bearing with me, it sometimes helps me in design if I write about it as I go):

That still leaves me with 7 levels. These levels probably need to have some minor helpful effects. But what? Outside of their attacks, weapons have costs, damage, weight, and properties. There are also a few weapons that have related feats.

Maybe two subclasses? One for the type of weapon (ie a category for swords, one for polearms, another for bludgeoning items). I think that sounds kinda cool. One will automatically be built into the class and the next will be by choice. So you can have a glaive of fire or a quarterstaff of necromancy.

It might offer up a little more analysis paralysis than usual, so it’s probably best to lock each benefit to individual choices.

The best part? It works out perfectly for spacing the features. Check it out:

Okay, so I’m pretty happy with this.

Only trouble is, I’ve now given myself the following things to make:

Woof. This is going to take a while.

Get a FREE 57-page book when you follow me on Patreon!

Each month, I collect all the content from the site and place them into full-color PDFs. All tiers have full access to these PDFs, too.

The first such PDF just hit a couple days ago and it’s called EVIL. It includes 3 new playable races, 17 new subclasses, over 30 new weapons, new rules, new spells, new monsters, all peer-reviewed and most of it playtested.

See what my patrons are saying:

Dave! I gotta say… I only joined your patreon just recently. I was not expecting this kind of output. Its fantastic! I haven’t had a chance to look through everything yet, but looks good so far. I appreciate your hard work!

I get about 5 patrons per day. So you know it’s a good deal!