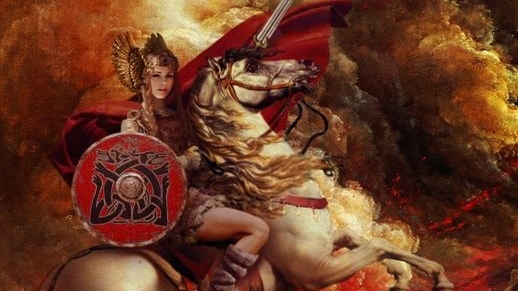 This one comes from not just a patron, but actually a member of the Bloody Bunch. Basically, it’s a subclass built off of the classic Valkyries from Norse Mythology. Seeing as how I’m currently in the middle of cooking up two different settings that can work it in–Omerian Echo and the forthcoming MARTIAL guidebook–I thought this fit pretty well for both.

So what is a Valkyrie? Let’s see what the ol’ Wikipedia has to say first.

In Norse mythology, a Valkyrie (/vælˈkɪəri, –ˈkaɪri, vɑːl-, ˈvælkəri/; from Old Norse valkyrja “chooser of the slain”) is one of a host of female figures who choose those who may die in battle and those who may live. Selecting among half of those who die in battle (the other half go to the goddess Freyja’s afterlife field Fólkvangr), the valkyries bring their chosen to the afterlife hall of the slain, Valhalla, ruled over by the god Odin. There, the deceased warriors become einherjar (Old Norse “single (or once) fighters”[2]). When the einherjar are not preparing for the events of Ragnarök, the valkyries bear them mead. Valkyries also appear as lovers of heroes and other mortals, where they are sometimes described as the daughters of royalty, sometimes accompanied by ravens and sometimes connected to swans or horses.

Surprisingly, they’re not as cool as Marvel comics would have us believe. But of course, we want to invoke the rule of cool instead of mead-bearing assistants to Odin, so let’s see the Marvel comics definition.

The Valkyrior are warrior goddesses of Asgard who ride winged horses. Originally, under the leadership of Brunnhilde, they took mortally wounded human heroes from German and Scandinavian battlegrounds and brought them to Valhalla, an area of the Asgardian dimension where the astral forms of the dead Asgardians and human heroes eternally feast and compete in friendly battles. The Valkyries were no longer able to perform this task when Odin, ruler of Asgard, vowed to the Celestials a millennium ago that he would severely restrict Asgardian contact with Earth.

Great! So now we know some cool things about them. Here is what I need to try to accomplish with this build:

This one wasn’t too much trouble. I know that I wanted to put the steeds in there, but I had to really “bring it down a notch” in order to work. I used the Samurai as a comparison subclass. Then, I pulled part “find steed” and “find greater” steed and cut out the stuff that would have made it overpowered such as the telepathic connection and shared spells. The one major buff that I did give it, though, is that it gets ranger animal companion style hit points with 3x level. This will juice it up slightly at 7th and then earn it 3 hp per level thereafter. Also, I tossed in a Charisma bonus to its AC and saving throws. This might make it a little tougher than the usual steed, but it also makes the fighter way more MAD than it normally is, so it should be fine. That seems fair and keeps it from getting smooshed at later levels. Also, I didn’t want to overwrite any of the mounted combatant goodies for those who want to min-max the shit out of this class.

Note the female restriction. This isn’t to cause controversy, but hey… I wanted to give it a little more flavor.

Mounted Fury works just like the Samurai’s Fighting Spirit except flipped where it imposes disadvantage and gives a damage bonus.

The Valkyrie gets immunity to fear and Wis saves at 7th. That shouldn’t be a big deal.

Then the ol’ “if you’re outta gas, here’s a can” power at 10th which also throws in the telepathic horse power.

15th lets the valkyrie disrupt attacks with her reaction. So a slight boost to action economy and more defensive, tanky powers.

Finally, at 18th, her horse gets a fly speed. I wish I could have brought this one up sooner, but it would have just been too powerful at low levels. Even sorcerers have to wait until 14th or so before they can fly full time.

At 3rd level, a fighter gains the Martial Archetype feature. The following Valkyrie option is available to a fighter, in addition to those normally offered.

You are of the Valkyrior, a host of warrior goddesses who ride upon the backs of winged horses into combat. Your mission is to seek out the mortally wounded of the world and bring them to the Outer Planes where they may eternally feast in the hall of fallen warriors.

Of course, much of that is part of the myth that surrounds you. In truth, you are a powerful warrior, whose mettle has never been truly tested. You are also an accomplished rider and mounted combatant. As you become more experienced, you grow a bond with your steed.

Only female humanoids can join the ranks of Valkyrion. Due to societal constraints, only females are chosen to become valkyries.

Your GM can lift this restriction to better suit the campaign.

When you choose this archetype at 3rd level, you can perform a 10-minute ritual in order to summon a spirit that assumes the form of an unusually intelligent, strong, and loyal warhorse, creating a long-lasting bond with it. The horse has the same stats as the warhorse presented in Appendix D of the PHB however, with the following changes:

When your horse drops to 0 hit points, it disappears, leaving behind no physical form. You can also dismiss your steed at any time as an action, causing it to disappear. In either case, using this feature again summons the same horse, restored to its hit point maximum.

You can’t have more than one horse bonded by this feature at one time. As an action, you can release your warhorse from its bond at any time, causing it to disappear.

Once you use this feature to summon your steed, you can’t use it again until you finish a long rest even if your steed disappears or you willingly dismiss it.

Fury of the Valkyrie

Starting at 3rd level, you are excellent at avoiding your opponent’s attacks while dealing additional damage. As a bonus action on your turn, you can impose a disadvantage on attack rolls against you and your mount until the start of your next turn. When you do so, you also gain a +2 bonus to the damage you deal with melee weapon attacks.

You can use this feature three times, and you regain all expended uses of it when you finish a long rest.

Starting at 7th level, you are unflappable in the face of danger. You are immune to being frightened.

Starting at 10th level, when you roll initiative and have no uses of Fury of the Valkyrie remaining, you regain one use. Also, while your Valkyrie’s Steed is within 1 mile of you, you can communicate with it telepathically.

Starting at 15th level, you are a master at turning your opponent’s strikes against them. If a creature within reach of your melee weapon targets you or your mount with a melee weapon attack while it has disadvantage on an attack roll, you can use your reaction to immediately make an attack against the creature. If you hit, the creature automatically misses its attack.

Flight of the Valkyrie

Get a FREE 56-page book when you follow me on Patreon!

Each month, I collect all the content from the site and place them into full-color PDFs. All tiers have full access to these PDFs, too.

The first such PDF just hit a couple days ago and it’s called EVIL. It includes 3 new playable races, 17 new subclasses, over 30 new weapons, new rules, new spells, new monsters, all peer-reviewed and most of it playtested.

See what my patrons are saying:

Dave! I gotta say… I only joined your patreon just recently. I was not expecting this kind of output. Its fantastic! I haven’t had a chance to look through everything yet, but looks good so far. I appreciate your hard work!

I get about 5 patrons per day. So you know it’s a good deal!