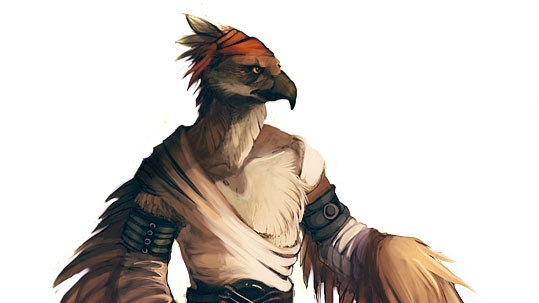 Master Gruawk was a blind aarakocra monk who taught a cadre of githzerai monks in the Ever-Changing Chaos of Limbo. Unfortunately, Gruawk perished in a slaadi incursion on the monastery, torn apart by the vicious frog-like outsiders. Now his ghost haunts the rock where his school once stood where he patiently waits for a worthy challenger.

Dive Attack. If Gruawk is flying and dives at least 30 feet straight toward a target and then hits it with a melee weapon attack, the deals an extra 3 (1d6) damage to the target.

Ethereal Sight. Gruawk can see 60 feet into the Ethereal Plane when he is on the Material Plane, and vice versa.

Incorporeal Movement. Gruawk can move through other creatures and objects as if they were difficult terrain. He takes 5 (1d10) force damage if he ends his turn inside an object.

Legendary Resistance (3/day). If Gruawk fails a saving throw he can choose to succeed instead.

Unarmored Defense. While Gruawk is wearing no armor and wielding no shield, his AC includes his Wisdom modifier.

Horrifying Visage. Each non-undead creature within 60 feet of Gruawk that can see him must succeed on a DC 18 Wisdom saving throw or be frightened for 1 minute. If the save fails by 5 or more, the target also ages 1d4 x 10 years. A frightened target can repeat the saving throw at the end of each of its turns, ending the frightened condition on a success. If a target’s saving throw is successful or the effect ends for it, the target is immune to Gruawk’s Horrifying Visage for the next 24 hours. The against effect can be reversed with a greater restoration spell, but only within 24 hours of it occurring.

Possession (Recharge 6). One humanoid that Gruawk can see within 5 feet of him must succeed on a DC 19 Charisma saving throw or be possessed by Gruawk; Gruawk then disappears, and the target is incapacitated and loses control of his body. Gruawk now controls the body but doesn’t deprive the target of awareness. Gruawk can’t be targeted by any attack, spell, or other effects, except ones that turn undead, and it retains its alignment, Intelligence, Wisdom, Charisma, and immunity to being charmed and frightened. It otherwise uses the possessed target’s statistics but doesn’t gain access to the target’s knowledge, class features, or proficiencies.

The possession lasts until the body drops to 0 hit points, Gruawk ends it as a bonus action, or Gruawk is forced out by an effect like the dispel evil and good spell. When the possession ends, Gruawk reappears in an unoccupied space within 5 feet of the body. The target is immune to Gruawk’s possessions for 24 hours after succeeding on the saving throw or after the possession ends.

Deflect Missile. In response to being hit by a ranged weapon attack, Gruawk deflects the missile. The damage he takes from the attack is reduced by 1d10 + 20. If the damage is reduced to 0, Gruawk catches the missile if it’s small enough to hold in one hand and Gruawk has a hand free.

Opportunist. Whenever a creature within 5 feet of Gruawk is hit by an attack made by a creature other than him, he can use his reaction to make a melee attack against that creature.

Strike and Move. Gruawk makes an unarmed strike. He can then move up to his full movement.

Strike and Dodge (Costs 2 Actions). Gruawk makes an unarmed strike. He then takes the Dodge action.

Shadowfist (Costs 3 Actions). Gruawk makes an unarmed strike. If the attack hits, the target takes an additional 22 (4d10) force damage and must make a DC 19 Constitution saving throw. On a failed saving throw, the creature is stunned until the end of Gruawk’s next turn.