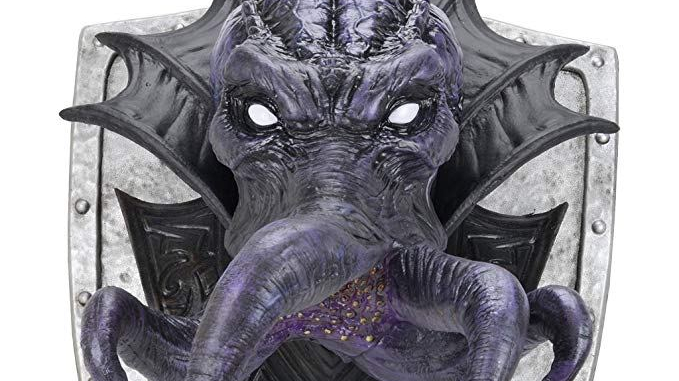 The mindflayers of Shum’morak are an inventive lot, aiming their duergar slaves at special projects such as this unique vehicle. The mechanical mindflayer head takes the form of an oversized illithid, tentacles and all. The mindflayer pilots use viewing screens from within that access scrying sensors from around the head itself. The vehicle requires a crew of six illithids to use all of its features. Many of the gears and controls are built specifically for mindflayer control, rendering the vehicle nearly useless to non-illithids.

Equipment and Options. The chief function of the mindflayer head is to patrol illithid lairs and amplify the abilities of the mindflayers within. Special headrests built into the interior allow the mindflayers to use their mindblast power to a greater degree. The front tentacles can capture a Large or smaller creature, allowing its brain extractor to quickly remove the target’s brain. Then, the brain is used as fuel.

Brain Extractor. The mechanical mindflayer head can use its brain extractor.

Mindblast (1/Turn). The mechanical mindflayer head can use its mindblast.

Move. The mechanical mindflayer can use its helm to move using its magical propulsion unit.

Tentacles. The mechanical mindflayer head can use its tentacles.

Move up to the speed of the head’s magical propulsion unit, with one 90-degree turn. The helm can be attacked only if the hull has taken 100 or more damage. If the helm is destroyed, the mindflayer head can’t move.

Magical Attack: The mechanical mindflayer head emits a 90-cone of amplified psychic energy. Each creature in the area must succeed on a DC 16 Intelligence saving throw or take 40 (8d8 + 4) psychic damage and be stunned for 1 minute.

Want your requests made by DMDave?

My Patreon group allows everyone to put in requests. Plus, you get these other benefits, too: