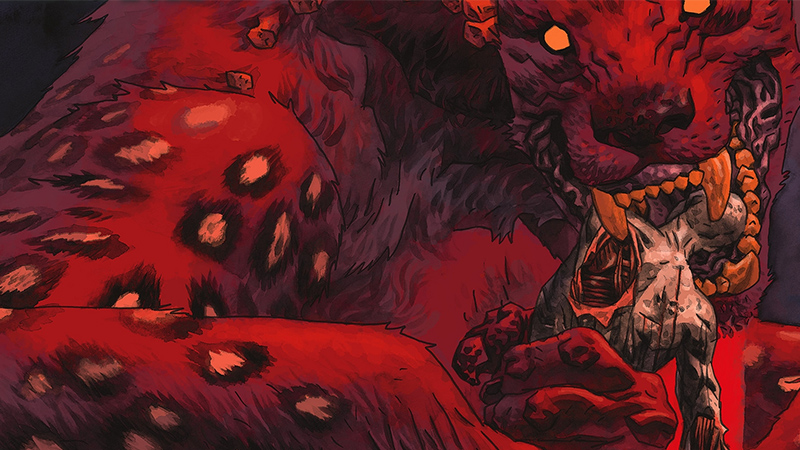 In Mesoamerican folk religion, a nagual or nahual (both pronounced [na’wal]) is a human being who has the power to transform either spiritually or physically into an animal form: most commonly jaguar, puma, and wolf, but also other animals such as donkeys, birds, dogs or coyotes.

In Dungeons & Dragons Fifth Edition, naguals are malevolent shapechanging fiends that possess lost souls. When the moon is full, the host transforms, revealing a monstrous jaguar-monster that craves the flesh of the living and will kill all in its path.

Damage Immunities poison; bludgeoning, piercing, and slashing from nonmagical attacks not made with silvered weapons

Shapechanger. The nagual can use its action to polymorph into a Large chaotic evil jaguar-humanoid hybrid, or back into its true form, which is humanoid. Other than its alignment and size, its statistics are the same in each form. Any equipment it is wearing or carrying isn’t transformed. It reverts to its true form if it dies.

Horrific Transformation. Any creature that witnesses the nagual’s transformation from its humanoid form to its hybrid form must make a DC 15 Wisdom saving throw or become frightened for 1 minute. If a creature’s saving throw is successful or the effect ends for it, the creature is immune to this effect for the next 24 hours.

Keen Hearing and Smell. The nagual has advantage on Wisdom (Perception) checks that rely on hearing or smell.

Pounce (Hybrid Form Only). If the nagual moves at least 20 feet straight toward a creature and then hits it with a claw attack on the same turn, that creature must succeed on a DC 18 Strength saving throw or be knocked prone. If the target is prone, the nagual can make one bite attack against it as a bonus action.

Multiattack (Hybrid Form Only). The nagual makes three attacks with its claws.

Bite (Hybrid Form Only). Melee Weapon Attack: +10 to hit, reach 5 ft., one target. Hit: 12 (1d12 + 6) piercing damage. If the target is a humanoid, it must succeed on a DC 17 Constitution saving throw or be cursed with nagual lycanthropy.