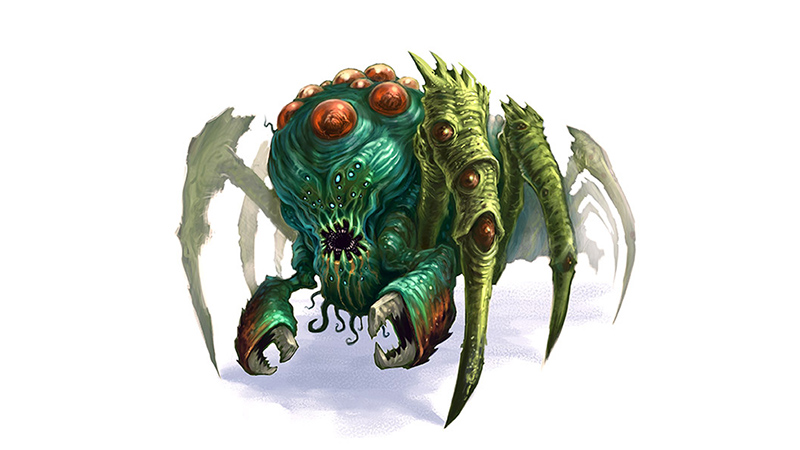 These monsters are free for you to use in your fifth edition Dungeons & Dragons campaigns. Just not commercially! And the art isn’t mine. Borrowed from various sources.

Nagpas just got their own little release with Mordenkainen’s Tome of Foes, so they’re covered. And I actually have third edition stats for maulephants in the old Fiend Folio. However, I wanted to learn more about brain collectors (also called Neh-thalggu) and feyrs (pronounced “fears”). Interestingly, both are quite Lovecraftian/Guy Davis in design. Lots of eyes and mouths, tentacles, spider legs, etc.

So this should be a hoot.

4 New Monsters for the Demi-Plane of Nightmares

These monsters are free for you to use in your personal Fifth Edition Dungeons & Dragons campaigns, just not commercially.

Brain collectors (Neh-thalggu in their own language) are rare creatures who occasionally cross the barriers separating their distant home from the Prime Material Plane. Only near sources of great magical energy, where the fabric of time and space is twisted, can they find small gateways to Mystara, where they collect the brains of intelligent beings.

Each specimen of this hideous race has a yellow-orange body – bloated, oily, and amorphous – with dozens of short, writhing tentacles. Six crablike legs allow it to scuttle about. Four large, yellow, bulging eyes and a tooth-filled maw are set in its bulbous head. The head may also have a number of distinctive lumps (up to twelve), each one housing the brain of another intelligent creature.

Neh-thalggu do not think like any other creature. They speak their own tongue and that of diaboli. They can also speak and comprehend the languages known by any creatures whose brains they’ve swallowed.

Additionally, we learn that the brain collectors fight using their razor-sharp bite and also casting spells stolen from devoured wizard brains. Careful and cunning fighters, the neh-thalggu try their damndest not to damage brains while fighting. After all, a broken brain is a bad brain.

Brain collectors can only store 12 brains at a time. Once they’ve collected their brains, they run off and hide, for… well, forever, I guess. Pretty freaky.

Oh! And they’re related to feyrs.

Feyrs (pronounced “fears”) are created from the remnants of ordinary nightmares, mixed with residual magical energies, and unknowingly brought to life by the strong emotions of a large group of people. They are most commonly found in large cities that have a good number of mages, priests, and other spell-casters. Normal feyrs stalk the streets at night, seeking nothing more than to create havoc. Great feyrs, on the other hand, are the combination of lesser feyrs, and may be found anywhere, though they a much rarer than the common feyrs.

Common feyrs appear as humped, hunchbacked creatures, grim and inhuman in appearance. Their hide is mottled and warped like the surface of the human brain. The creature is supported by two main tentacles which act as legs, and by a handful of other tentacled limbs. Massive horizontal jaws line its underside, and the forepart of the beast has 1-5 eyes, usually the color of melted gold. The feyr’s hide is a sickly rainbow of shades, like light reflected off an oil slick. There are dull blues and blacks along the body, pale reds and magentas toward the head, and deathly greens and yellows along the belly.

Feyrs use their underslung horizontal mouths to make attacks. These attacks aren’t so much for eating, but to cause fear in others. Those who witness it must make a save versus becoming frightened. Also, they have a weakness to direct sunlight, although they’re either too dumb or don’t care that it can kill them, and won’t make efforts to avoid it.

Common feyrs are created by the emotions of a mass group of people. And multiple common feyrs can combine to create a great feyr.

Feyrs are frequently found in places that are under great stress, such as cities in the midst of civil war, summer heat, or plague.

The frightening but fascinating maelephants guard the Lower Planes. They are large, roughly bipedal creatures with huge pachyderm heads that have a viciously barbed trunk.

Maelephants speak their own language, and many know the common tongue, as well.

Combat-wise, maelephants are immune to nonmagical weapons, regenerate, and are mostly impervious to fear effects. Maelephants use their claws in combat and trunk spikes. Plus, they can charge. A few times a day, a maelephant can breathe a poisonous gas that induces memory loss. In addition, maelephants have a whole mess of innate spellcasting abilities such as alarm, blade barrier, entangle, gust of wind, light, polymorph, and true seeing.

Innate Spellcasting. The brain collector’s innate spellcasting ability is Intelligence (spell save DC 14). It can innately cast the following spells, requiring no components:

Terrifying Bite. If the feyr makes a bite attack against a creature and it hits, all creatures within 30 feet of the feyr that can see it must make a DC 12 Wisdom saving throw or become frightened for 1 minute. A creature can repeat the saving throw at the end of each of its turns, ending the effect on itself on a success. If a creature’s saving throw is successful or the effect ends for it, the creature is immune to the feyr’s Terrifying Bite for the next 24 hours.

Sunlight Hypersensitivity. The feyr takes 20 radiant damage when it starts its turn in sunlight. While in sunlight, it has disadvantage on attack rolls and ability checks.

Terrifying Bite. If the feyr makes a bite attack against a creature and it hits, all creatures within 30 feet of the feyr that can see it must make a DC 14 Wisdom saving throw or become frightened for 1 minute. A creature can repeat the saving throw at the end of each of its turns, ending the effect on itself on a success. If a creature’s saving throw is successful or the effect ends for it, the creature is immune to the feyr’s Terrifying Bite for the next 24 hours.

Whenever the feyr deals damage to the charmed creature, it can repeat the saving throw, ending the effect on itself on a success.

Invisibility (Recharge 4-6). The feyr magically turns invisible for up to 1 hour or until it attacks, it casts a spell, or its concentration is broken (as if concentrating on a spell). However, the feyr can still use its Affect Emotions action while invisible. Any equipment the feyr wears or carries is invisible with it.

Charge. If the maelephant moves at least 20 feet straight toward a target and then hits it with its claws attack on the same turn, the target takes an extra 9 (2d8) slashing damage. If the target is a creature, it must succeed on a DC 16 Strength saving throw or be knocked prone.

Keen Hearing and Smell. The maelephant has advantage on Wisdom (Perception) checks that rely on hearing or smell.

Innate Spellcasting. The maelephant’s innate spellcasting ability is Charisma (spell save DC 13). It can innately cast the following spells, requiring no components:

Claws. Melee Weapon Attack: +8 to hit, reach 5 ft., one target. Hit: 13 (2d6 + 6) slashing damage, and the target is grappled (escape DC 16) if it is a Large or smaller creature. Until the grapple ends, the maelephant can’t use its claws on another target. In addition, the target takes 7 (2d6) bludgeoning damage at the start of each of the maelephant’s turns and the maelephant’s spiked trunk attack has advantage against the target.

Memory Gas (Recharge 6). The maelephant exhales poisonous gas in a 30-foot cone. Each creature in that area must make a DC 13 Charisma saving throw or suffer complete memory loss. While a creature suffers from memory loss, it loses access to all of its class abilities and spells and has disadvantage on attack rolls and ability checks. The memory loss lasts until removed by a lesser restoration spell or similar magic.

Design-wise, you might have noticed that I totally skipped over the third edition iterations of these beasts. I felt that the third edition versions were a little too strong. For example, the brain collector is a Challenge Rating 26 creature in third (it’s from the Epic Level Handbook), which I thought was goofy and frankly, kind of boring.

These guys are taken straight from the second edition. So no one here really pops up above Challenge Rating 5. Which, personally, I like stuff like that.

I’m sure to make a few more nightmare denizens as the week goes by.