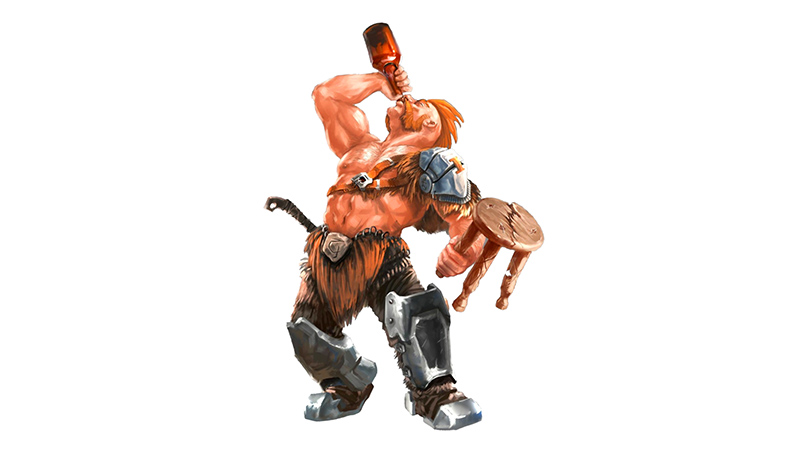 At 2nd level, a barbarian gains the Primal Path feature. The following Path of the Reveler option is available to play a barbarian, in addition to the normal options offered.

Path of the Reveler

Raging isn’t always about anger. Sometimes, it’s about being getting lost in the moment. This is what those who follow the Path of the Reveler believe. Also known as a “festive brute”, the Reveler’s rage is one that involves heavy drinking, dance, and cheering. That’s not to say it still doesn’t still act like a barbarian. Punches are still thrown, hits are landed, and the barbarian creates destruction in its wake. Yet, it’s a lively destruction, the type that those on the receiving end might even remember as being somewhat enjoyable.

Starting when you choose this path at 3rd level, you dance while you rage, often with others–whether they want to or not. While raging, you can use your bonus action to target one creature within 5 feet of you. The creature must succeed on a Strength saving throw (DC equal to 8 + your proficiency bonus + your Strength modifier). The creature can willingly fail its saving throw. On a failed save, you and the creature switch places and the creature has disadvantage on its next attack roll or ability check.

At 6th level, your body is so used to long nights of copious drinking, you actually gain benefits from it. You gain resistance to poison damage and immunity to the poisoned condition. In addition, you have advantage on saving throws to avoid taking levels of exhaustion.

Beginning at 10th level, you can use your action to elevate others around you, even your enemies. When you do so, choose one creature that you can see within 30 feet of you. If the creature can see or hear you, it must succeed on a Wisdom saving throw (DC equal to 8 + your proficiency bonus + your Charisma modifier) or be charmed by you until the end of your next turn. On subsequent turns, you can use your action to extend the duration of this effect on the charmed creature until the end of your next turn. This effect ends if the creature ends its turn out of the line of sight or more than 60 feet away from you.

If the creature succeeds on its saving throw, you can use your reaction to make a melee weapon attack against that creature.