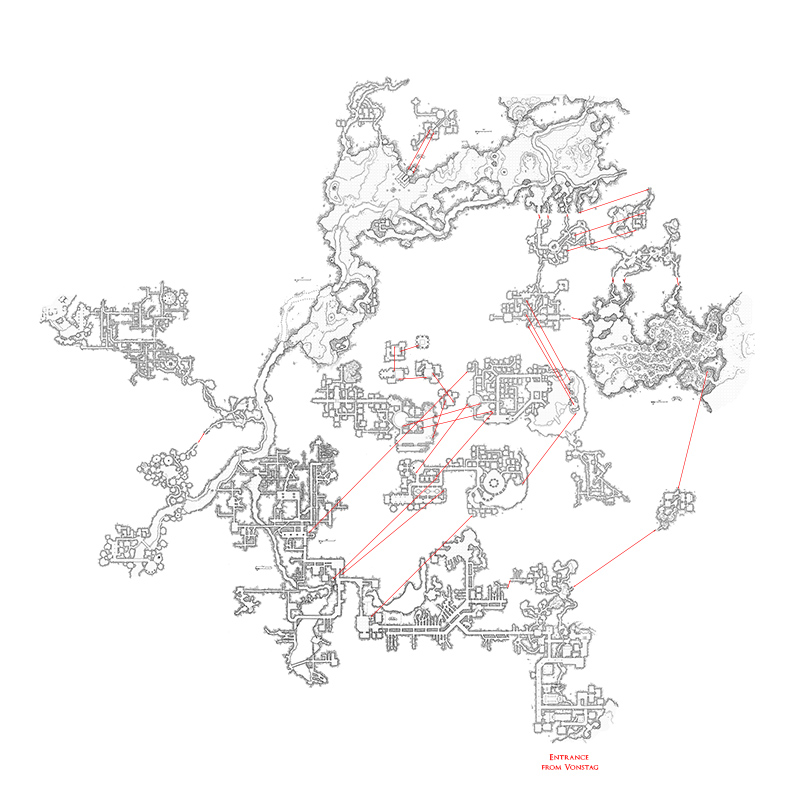 Finding Dyson Logos’ maps was probably one of the greatest things to happen to my D&D game. His old school style, creative shapes, and vivid storytelling makes for some great adventure-creation-mojo.

One of the coolest things he’s ever come up with, though, is definitely got to be the Dyson Megadelve. This 31-map monstrosity takes adventurers through all sorts of fun and freaky underground escapades. There’s a lost dwarven city, an old abandoned necropolis, goblin and ogre caves, a lost river, and even a humongous cavern filled with giant purple mushrooms. My imagination is on fire!

Here’s the Megadelve in all its assembled glory (assembled by me in Photoshop):

If you’re interested in seeing it for yourself and all its pieces, just jump over to Dyson Logos’ own website where you, too, can get a copy of this behemoth. It’s not available for commercial use (although a lot of his stuff is), but free for you to do whatever you like with it. Plus, he has a Patreon that’s pretty rad, too: Dyson Logos on Patreon.

Journeys Through the Underdark

My players have already been in the Underdark for a while now. What started as the typical off-quest “hey, what’s that down there?” has evolved into a full-on side quest. They’ve already conquered a city full of intelligent skeletons and dealt with some surly ostons. Now, they’re making their way to the tower of the infamous Duke of Nightmares. Of course, it’s not an easy path–they’ve got to go through a series of labyrinthine tunnels to get there.

Their first stop was the Giant’s Citadel. Since the PC’s were already in a Duergar city that dealt with stone giants, it made sense to start them there. They sort of cut straight across it and avoided most of the stone giants. At level 6ish, that was probably a smart move on there part.

As I’m populating this bonkers-big dungeon, I’m going to be writing notes. So my thought was: why just create notes for myself when I can share them on the internet. Of course, if you’re one of my players and happen to be reading this and hate spoilers… well… I wouldn’t read any further. At least not ’til you’ve been through that part of the Mega-Delve.

But for everyone else reading, enjoy, have fun, and let me know what you think in the comments below!

In the next part of this series I’m calling “Populating the Dyson Mega-Delve” I’m going to show you how I populated The Dwarven Outpost map based on Dyson’s layouts and description.