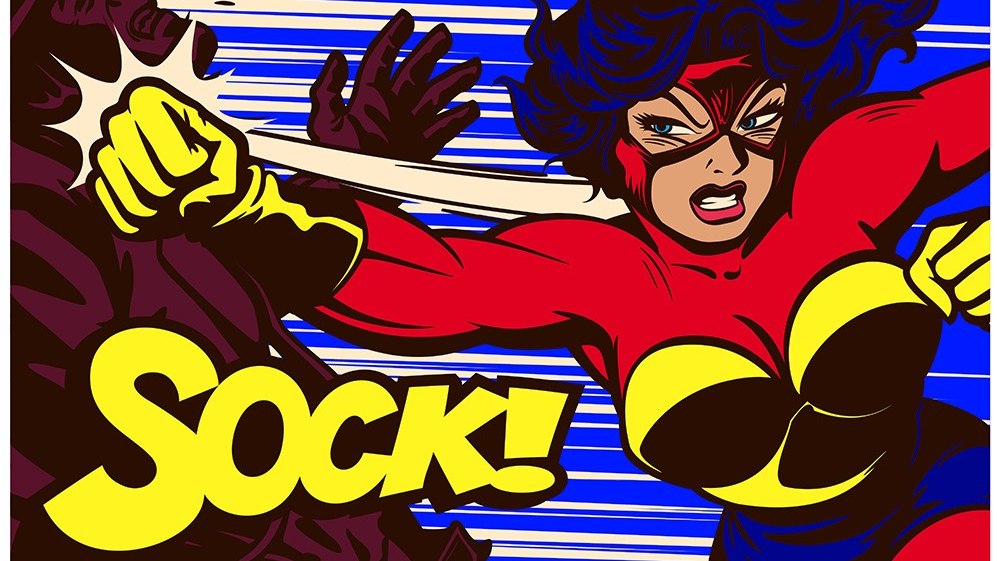 This article series offers details and guidelines for creating a superhero campaign setting using the Fifth Edition ruleset. It is a work in progress, so that may mean that parts of the article may appear at various intervals. At any given time, I’m working on a few different Fifth Edition projects, so there is always the potential that this one gets temporarily abandoned for something more pressing (such as BroadSword Magazine). Sorry, folks. Thems the breaks.

Captain America was a part of the Super Soldier program. Iron Man built his own power armor using spare missile parts in a cave. Wolverine was born with an accelerated healing factor and bone claws. While many superheroes may fight for the same things, it’s rare that two superheroes have the same origin story. Where many Fifth Edition rulesets have races or species to choose from, Powerful offers a variety of Origins. By choosing an Origin, you’re deciding a little of your character’s backstory–and making a choice that influences his or her abilities and skills.

While your origin story offers cues to help you create your character, it is not your background. Just like in traditional fantasy Fifth Edition, your character still has a background, personality traits, ideals, bonds, and flaws that make him/her unique.

What an origin story does is present the unusual circumstances in which your character gained his/her special abilities.

Something weird happened to you. Perhaps you were bitten by a radioactive insect of some sort. Or maybe you were caught in a wave of interstellar radiation. A barrel of toxic waste fell off a truck, splashed you, and now you have impenetrable skin.

Freak accidents are a common trope in superhero stories. What’s truly appealing about freak accident stories is that they could happen to anyone. It allows an average Jane or Joe to transcend the mortal coil and become something greater than they once were. And then, of course, with these newfound “great powers” comes “great responsibility.”

Examples of freak accident victims include Spiderman, the Fantastic Four, and the Flash.

While freak accidents can create all sorts of different superheroes, the following origin traits are common among all freak accident victims.

Skills. You gain proficiency in one skill of your choice.

Innate Powers. You gain two natural powers. In addition, choose one 1st-level power. Using this trait, you can use the power once at its lowest level, and you must finish a long rest before you can use it in this way again. Your power ability for this power is Charisma.

All your life you’ve had a feeling that there was something special about you. Something different. Something unique. Eventually, that premonition was served by the arrival of a strange force–an ancient wizard, a magical ring, an apparition–that gave you the powers you now possess.

Chosen Ones were born to become heroes, whether they knew it or not. Often, these individuals are wracked by visions of the near future. In addition, they stand out, even when they are among other superheroes. Their presence rarely goes unnoticed.

Examples of Chosen Ones include Green Lantern, Dr. Strange, and Shazam.

No matter what path the Chosen One follows to gain his or her powers, all Chosen Ones share these common traits.

Path of the Chosen. You have advantage on Wisdom and Charisma saving throws against powers.

Lucky. When you roll a 1 on the d20 for an attack roll, ability check, or saving throw, you can reroll the die and must use the new roll.

Not all heroes were born on earth. In fact, some heroes come from space and beyond. Others are animals who gained sentience and powers of their own. Some might even be an illustration or cartoon that sprung off the page/screen and came to life.

Inhuman superheroes may not see themselves as superheroes. They might come from a place where all creatures are like them; they’re the average Jane or Joe of their own world. Only when they arrive on earth do they rise above humanity.

Alien, animal, or other, all inhumans share the following traits.

Darkvision. You perceive the world differently than humans. You can see in dim light within 60 feet of you as if it were bright light, and in darkness as if it were dim light. You can’t discern color in darkness, only shades of gray.

The amazing thing about the human spirit is its willingness to go above and beyond itself. This is where the technological marvel superhero operates. Whether it is through genetics, robotics, or chemistry, you’ve given yourself superhuman abilities. And while you may not have true powers of your own, your incredibly Intelligence is a power in its own right.

Examples of technological marvel superheroes include The Atom, Iron Man, and Ant-man.

Skill Versatility. You gain proficiency in three skills or tools of your choice. Then, choose one of the skills to become an expert in. Your proficiency bonus is doubled for any ability check you make that uses that skill.

There are two common augmented archetypes. The first is the physical augmented, the one that improves their Strength, Constitution, and Dexterity. The second is the mental augmented, who seeks to improve their Intelligence.

Examples of augmented superheroes include Captain America, The Leader, and The Hulk.

As an augmented, you have the following traits.

Enhanced Perception. You gain proficiency in Wisdom (Perception). In addition, your proficiency bonus is doubled for any ability check you make that uses Perception.

Sometimes a superhero has no true powers at all. They are merely humans that have pushed themselves to their absolute limits. In fact, no element of their being escapes targeted improvement. They are stronger, faster, tougher, smarter, wiser, and more attractive than others.

Examples of strongwilled heroes include Batman, Robin, and the Punisher.

As a strong-willed hero, you have the following traits.

Ability Score Increase. Your ability scores each increase by 1.

On your fifteenth birthday, feathered wings sprouted from your back. That mysterious cult subjected you to a green fog, and now you can breathe underwater and talk to fish. For as long as you can remember, you’ve always been able to turn into a cat.

An evolved hero is one that is born with its powers. Sometimes, the powers manifest immediately, showing themselves as early as birth. Other times, the powers appear later, either as a result of puberty or through an accelerant.

Examples of evolved heroes include the X-men, the Inhumans, and the Umbrella Academy.

All evolved superheroes have the following traits in common.

Innate Powers. You gain four natural powers. In addition, choose two 1st-level powers. Using this trait, you can use each power once at its lowest level, and you must finish a long rest before you can use either in this way again. Your power ability for this power is Constitution.