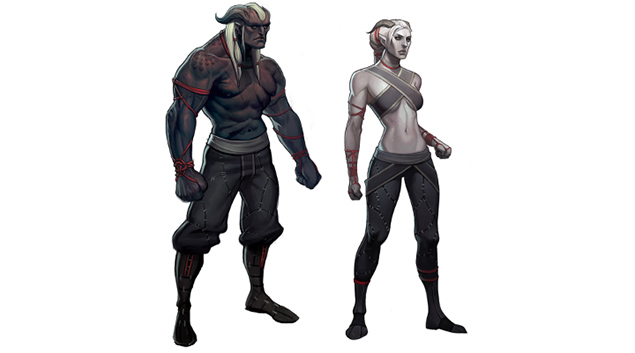 After getting the other 6 races knocked out, it’s now time to turn to those starting with the Qunari. I admittedly had to do a little research on these.

Originally from the Dragon Age Wiki:

The Qunari (literally, “People of the Qun”) is the umbrella term most commonly used to describe the white-haired metallic-skinned race of large humanoids and their society that governs the islands of Par Vollen and Seheron, as well as the settlement of Kont-Aar in northern Rivain, and Qundalon in the Anderfels.

Members of any race who adhere to the teachings of the Qun can become “Qunari”, but those other than the original giant race, that is humans, elves, and dwarves, are called Viddathari within the Qun. Humans of Rivain and elven slaves of Tevinter are especially susceptible to conversion, although it is not unknown for members of other groups to embrace the Qun.

Members of the Qunari race are rarely seen outside of their lands with the exception of Rivain. During the Dragon Age, a fleet of Qunari ships sank in the Waking Sea between Ferelden and Free Marches, which resulted in Qunari presence in both of these lands. Tal-Vashoth are much more present in non-Qunari lands, most commonly as elite mercenaries, such as the Kadan-Fe in Ferelden.

Your qunari character has a variety of natural abilities.

Age. Qunari mature at the same rate as humans, but live slightly longer lives. They are considered young until they reach the age of 30. On average, they live for 200 years.

Alignment. Qunari live by the Qun, the Qunari religion, which governs each part of their society. As such, Qunari are nearly always lawful in alignment. They do not tend strongly towards good or evil, although others outside of their caste may see their rigid ways as evil.

Size. Qunari are much taller than humans, standing between 7 and 8 feet in height. They average around 250 to 300 pounds. Your size is Medium.

Qunari Durability. You have advantage on Constitution saving throws against nonmagical effects.

Languages. You can speak, read, and write Common and Qunari.