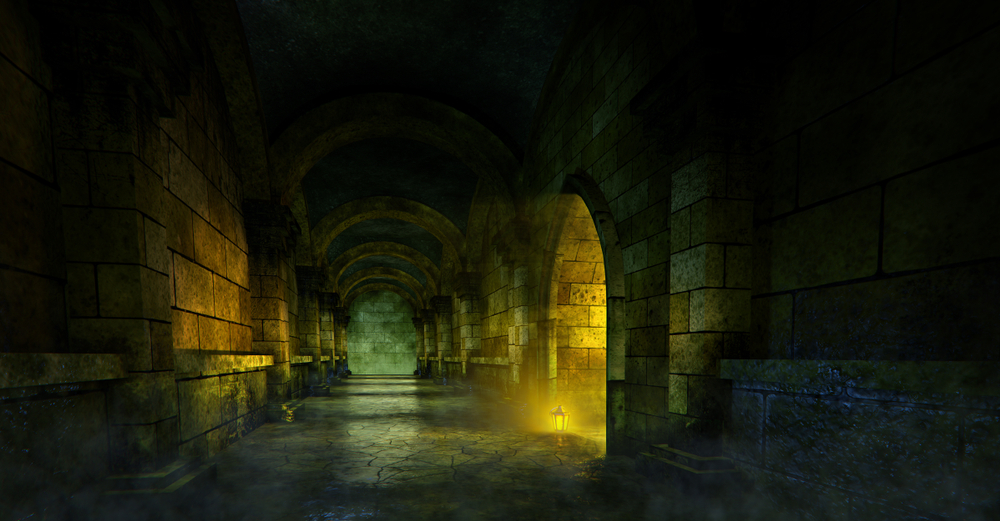 For several centuries the citadel of the Diamond Prince was considered lost until it was rediscovered by a gang of goblins. This Fifth edition one-shot adventure is intended for 3-5 characters of 3rd level. Some of the traps in this dungeon are particularly dangerous—players who charge in expecting an easy romp may find themselves rolling up new characters midway through play.

While traveling, the characters are approached by a gang of goblins (five goblins lead by a chief). Oddly, the goblins don’t wish to fight. Instead, they tell the characters they need help. They lead the characters to a hole in the ground that leads into an ancient tomb. The goblins promise to split half the treasure that the characters find if they can get past the tomb’s defenses—namely a horrible undead monster just beyond the front door.

Of course, it’s all a trick. The goblins hope to gain the characters’ trust by having them fight off the “big monster” and find the keys they already found, then face the real threat later on past the star doors—the wraiths and specters that haunt the tomb.

Secret Citadel of the Diamond Prince

Unless stated otherwise, the citadel has 15 foot high ceilings. It’s carved of hewn stone, with base reliefs throughout most of the chambers and halls. The doors are made of heavy stone and swivel on stone hinges, typically inward toward their respective rooms. Remember: stone is heavy, weighing 200 pounds per cubic foot. Sarcophagi lids, doors, and other stone objects will be tough for characters to move. There is no light within.

It’s obvious that this room was originally sealed. Rubble is strewn all over the ground from where the goblins broke through and entered. The characters will see their small footprints all over. On the southern wall are criss-cross iron bars, likely centuries-old (Strength DC 24 to break, AC 18, 50 hp, immunity to psychic and poison). The iron bars at the east end of Area 6 share the same statistics.

The stone door leading to Area 2 is unlocked but trapped. When pushed open, a blade drops from the frame onto any creature walking through it; a target must make a DC 13 Dexterity saving throw, taking 10 (3d6) slashing damage on a failed saving throw or half as much on a successful one.

When the characters enter, they immediately see a huge creature sitting in a pile of its own filth. It’s as tall as a giant and moans like a ghost. It has no discernible facial features; just folds of skin. The creature is, in fact, a hill giant that the goblins captured. The goblins hobbled the giant, cut out its tongue and blinded it. From there, they put a mask over its head and covered it in wolf dung to give it its “undead” appearance. The blinded hill giant fights anything that comes into the room. The giant’s movement is 15 feet per turn because of its injury, and it only has its fists to fight with (+8 to hit, 15 (3d6 + 5) bludgeoning damage on a hit). It only has 50 hit points and its CR is 3 (750 XP).

The stone door to the east is unlocked and easily pushed open.

The chamber to the north of the “monster’s” room used to contain and alter and a statue with diamonds in its eyes. The goblins smashed both the altar and the statue, pocketing the diamonds for themselves (the chief still has them in one of his pockets). Later, when they started putting their plot together, they hid one of the star-shaped keys among the rubble. Characters can find the key pretty easily; a passive Perception of 10 or more notices a glimmer of gold on the floor.

Two massive iron-clad double-doors have been decorated with stars. A character might notice that the doors have recently been opened with a successful DC 12 Wisdom (Perception) check. Two keyholes on a stone protrusion shaped like a star are beset in the western wall just to the south of the door. Placing both the keys from areas 3 and 5 into the holes and turning them unlocks the door. However, the keys must remain turned or the doors seal shut.

Given the opportunity, the goblins will offer to watch the door while the characters are beyond the doors. Their true plot, of course, is to allow the characters to go inside so they can shut the doors behind them. They promise to reopen the doors once the characters rid the citadel of the other dangers within.

The goblins hid the second star-shaped key in this room. It’s been shoved into a crack in the wall. The characters can find it with a successful DC 12 Wisdom (Perception) check.

The dead bodies of goblins litter this cursed hall. Whenever a living creature enters the hall, the goblins come to life (along with any other dead creatures). The zombies are Small and their slam attacks only deal 3 (1d4 + 1) bludgeoning damage on a hit.

It requires a successful DC 12 Wisdom (Perception) check to notice the secret door into this room. The goblins already opened it, but it sealed shut again.

Hundreds of skulls and bones are jammed into pockets in the wall. Two angry specters and eight skeletons rise from these skulls and attack any who enter this room. Once risen, they will follow creatures throughout the citadel until they successfully kill them, are destroyed, or lose sight of the creature (as is the case with the goblin in Area 8).

It requires a successful DC 10 Wisdom (Perception) check to notice the secret door into this room—and it looks like it’s already been opened.

There are twelve sarcophagi here. The sarcophagi contain the remains of ancient dead warriors. A goblin named Moop hides in the room, the only survivor of the initial incursion. Moop asks the characters to help him in exchange for a bag of gems it’s hidden in a crack of one of the stone sarcophagi. There are four gems of various colors, each worth 10 gp.

It requires a successful DC 15 Wisdom (Perception) check to notice the secret door into this room.

This room holds six magical glass boxes arranged in two north-to-south columns of three. Each box measures 4 feet wide by 2 1/2 feet high and 2 feet deep. Each appears to hold an ornate weapon floating in midair inside. Starting with the northwestern-most weapon and going clockwise, they are a great axe, mace, rapier, greatsword, flail, and crossbow.  If any of the boxes are opened without saying the proper command word (lost for centuries, of course), all but the box with the rapier opens and the weapons attack. Treat the five weapons each as a flying sword, except it deals damage appropriate for the weapon on a hit. The weapons, when destroyed, lose their magic and become mundane weapons, likely destroyed int he confrontation.

The last contains the diamond prince’s rapier of spite (you can substitute a +1 rapier if you choose not to use the rapier of spite). The glass case is magically locked. It requires a dispel magic spell cast upon it to open without issue. Otherwise, it can be broken open: DC 20 Strength check to break; AC 23; hp 30; resistant to all damage, except immune to poison and psychic.

The stone door into this chamber is locked and trapped. It requires a DC 15 Strength check to break, or DC 15 Dexterity check using proficiency with thieves’ tools; AC 17, hp 25, immunity to poison and psychic.

Noticing the trap on the door requires a successful DC 10 Intelligence (Investigation) check to notice it, then another DC 12 Dexterity check using thieves’ tools to disarm it. If a creature fails to disarm it and they open the door, a massive, 10-foot-cubed, 85-ton stone block falls from the ceiling. Any creature standing in the 10 x 10-foot space directly in front of the door must succeed on a DC 10 Dexterity saving throw or take 42 (12d6) bludgeoning damage and is restrained until the block is pulled off them. On a successful saving throw, the creature moves to the nearest unoccupied space. If the character can’t or won’t move, they remain where they are and suffer the consequences of a failed saving throw.

The block also prevents anyone from entering Area 10. The block can be moved by creatures with a combined Strength of 60. Otherwise, it must be destroyed (AC 17, 45 hp, damage threshold 5, immunity to poison and psychic).

Once past the trapped door, the Area is a clean area decorated with murals and frescoes telling the story of the diamond prince’s life and victories. A stone door painted gold stands between this area and area 10. It is unlocked and untrapped.

This massive room has ceilings 25 feet high. At the far end of the room is another statue of the diamond prince. This time, its eyes are decorated with glistening diamonds. At the center of the room is a sarcophagus that contains the body of the diamond prince. When a living creature enters the room, the Prince’s wraith form rises from its sarcophagus and attacks. In addition to its normal abilities, the wraith has lair actions it can take on initiative count 20, losing initiative ties. It can’t use the same lair action two rounds in a row.

The prince fights until destroyed. Unless his body is set afire or sprinkled with holy water, the prince rejuvenates within 1 hour, returning as another wraith. The prince viciously attacks any creature that is carrying his rapier.

The diamonds in this room and the four the chief are carrying are actually zircon, worth no more than 50 gp each.

The goblins (if they’re alive) refuse to open the doors until the characters give up the treasure, passing through either one of the steel grates. Even then, they would prefer to keep the characters locked in, hoping to starve them, then rob their corpse.

Get this PDF plus 80+ more when you become a DMDave Patron!