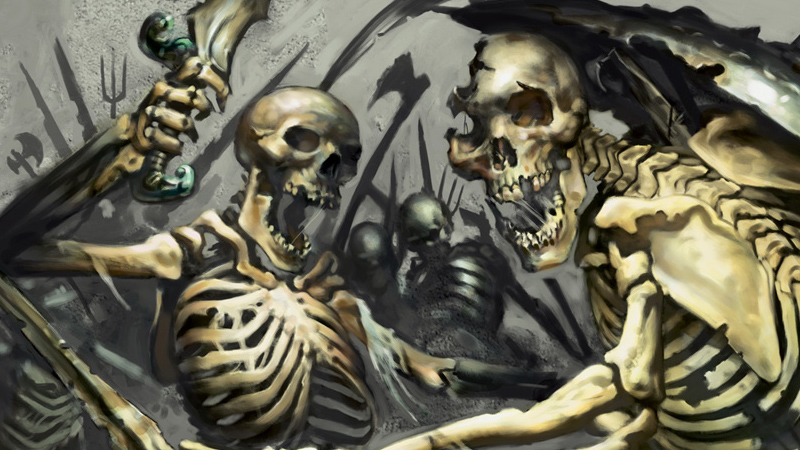 Need more skeletons for your Dungeons & Dragons Fifth Edition campaigns? Obviously, not every skeleton you’ll run across in Fifth Edition is going to be either a humanoid, minotaur, or warhorse, right? No worries. We’ve got you covered.

This skeleton template can be applied to any beast, dragon, humanoid, giant, or monstrosity that has an internal skeletal structure.

Type. The creature’s type changes to undead. It no longer requires air, food, drink, or sleep.

Speed. The creature may lose its ability to fly such as if it had feathered or leathery wings. Use your own discretion.

Saving Throws. The creature loses all of its saving throw proficiencies.

Skills. The creature loses all of its skill proficiencies.

Damage Immunities. The creature gains an immunity to poison attacks.

Condition Immunities. The creature gains immunity to the exhaustion and poisoned conditions.

Senses. The creature gains darkvision out to 60 ft.

Languages. The creature understands all languages it knew in life but can’t speak.

Special Abilities & Features. Remove any special abilities or features that require physical characteristics beyond a skeletal structure. For example, a lizardfolk skeleton would no longer need its Hold Breath feature since it lacks lungs (and undead don’t need air). In addition, remove any abilities that use a spellcasting ability.

Actions, Legendary Actions, & Reactions. Remove any actions, legendary actions, or reactions that require physical characteristics beyond a skeletal structure. For example, an adult red dragon skeleton would no longer have access to its Fire Breath, Frightening Presence, or Wing Attack (the attack relies on the leather between its wings to work).

Armor Scraps. Some skeletons wear armor scraps. Armor scraps count as having an armor class of 11 + the creature’s Dexterity modifier.

Barding Scraps. If it is a large animal used as a mount, it may have barding scraps. Barding scraps offer an armor class of 12 + the creature’s Dexterity modifier.

Hope this helps you out with your own Dungeons & Dragons Fifth Edition campaigns. If you’re like me, you probably just wish the folks over at Wizards of the Coast would just spell it out–instead of relying on us to reverse engineer it. But I digress.

Let me know what you think about the skeleton template for Dungeons & Dragons Fifth Edition down in the comments below.

And if you aren’t already, be sure to follow along with the blog by signing up to form on the right sidebar or down in the comments.