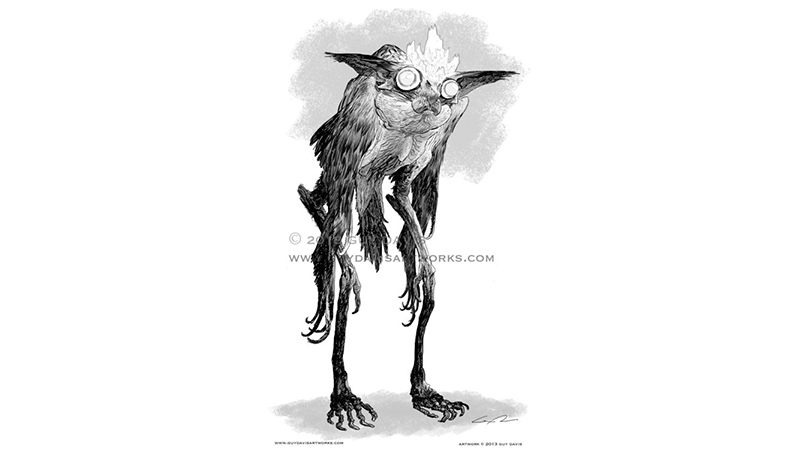 Inspiration comes from the best place. Case in point: this morning, I was looking through Guy Davis artwork and I came upon this guy.

First, if you don’t know who Guy Davis is, do yourself a favor and look him up online. He was the artist for the comic book BPRB (a spinoff of Hellboy) for years. These days, he’s a big-time Hollywood concept artist. He frequently collaborates with Guillermo del Toro, creating the creatures for such films as Crimson Peak, Pacific Rim, and of course, Hellboy. And believe it or not, he actually used to do art for D&D back in third edition!

This monster is Stolas. Stolas is a part of the Ars Goetia collection, one of the five books of the Lesser Keys of Solomon. The Lesser Key of Solomon, also known as Clavicula Salomonis Regis or Lemegeton, is an anonymous grimoire (or spellbook) on demonology. It was compiled in the mid-17th century, mostly from materials a couple of centuries older. It is divided into five books—the Ars Goetia, Ars Theurgia-Goetia, Ars Paulina, Ars Almadel, and Ars Notoria.

Now is that fucking cool or what?

Stolas (also known as Stolos, Stoppas and Solas) is a Great Prince of Hell, commands twenty-six legions of demons, and teaches astronomy and the knowledge of poisonous plants, herbs and precious stones. He is depicted as either being a crowned owl with long legs, a raven, or a man.

Stolas is a demon prince of the Abyss. He is known as the Watcher and Prince of Omens. He rules over the monstrous stikini, owl-like demons that lurk in his abyssal layer Stelsutobidus as well as the Shadowfell.

Perpetually pondering future events, Stolas resides in the Gnarled Tower, a great, twisted spire that stares up into an endless night sky. The light from his burning crown can be seen throughout most of his layer, Stelsutobidus, sometimes called the Valley of Omens. Part of Stelcustodibus borders a massive portal to the Far Realm, which commands a majority of Stolas’ attention. This portal can be seen from the Gnarled Tower.

The rare cults that devote themselves to Stolas are usually made of diviners, nothics, fortune-tellers, aberration-hunting rangers, and hags. Many of Stolas’ cultists live outdoors or in towers, observatories or castles missing rooves, typically in places with clear skies such as barren deserts and remote mountain tops. In addition, the cultists of Stolas possess a strong hatred of aberrations and will destroy any they come across. Over time, cultists of Stolas develop crooked necks and wide, blood-shot eyes, a side effect of constantly staring into the future or up into the night sky. They often babble about “the End of Everything” and “the End Times.”

Stolas appears as a large owl-like monstrosity with long, gaunt legs. His eyes are two blank orbs that never blink. Upon his head rests a flaming crown.

If pressed into combat, Stolas uses his talons and crown of fire to deal with foes. His strong powers of divination also give him an advantage in a fight, as he is often able to predict an opponent’s moves before they happen.

Stolas’ lair in the Abyss is called Stelsutobidus. It looks like a valley atop a great mountain range with ridges that are near impossible to cross. The floor of the valley is thick with vines, razor-sharp thorns, and crystalline spires. It is perpetually night in Stelsutobidus, the skies always clear and filled with strange, forgotten stars.

Common creatures in stolas’ lair include nothics, stikinis, wereowls, and blights. Beyond the Gnarled Tower, there is little sign of civilization on this layer.

On initiative count 20 (losing initiative ties), Stolas can take a lair action to cause one of the following effects; he can’t use the same effect two rounds in a row:

The region containing Stolas’ lair is warped by his magic, creating one or more of the following effects.

If Stoilas dies, these effects fade over the course of 1d10 days.

If a creature goes mad in Stolas’ lair or within line of sight of the demon lord, roll on the Madness of Stolas table to determine the nature of the madness, which is a character flaw that lasts until cured. See the Dungeon Master’s Guide for more on madness.

Flyby. Stolas doesn’t provoke opportunity attacks when he flies out of an enemy’s reach.

Keen Hearing and Sight. Stolas has advantage on Wisdom (Perception) checks that rely on hearing or sight.

Knowledge of the Future. Stolas has a +10 bonus to initiative and he can’t be surprised while he is conscious. In addition, other creatures don’t gain advantage on attack rolls against Stolas as a result of being unseen by him.

Legendary Resistance (3/Day). If Stolas fails a saving throw, he can choose to succeed instead.

Magic Resistance. Stolas has advantage on saving throws against spells and other magical effects.

Multiattack. Stolas makes three attacks: one with his beak and two with his talons.

Crown of Fire (Recharge 6). Stolas’ flaming crown ejects a jet of white-hot flame in a 30-foot cone. Each creature in the area must make a DC 19 Dexterity saving throw. On a failed save, the creature takes 38 (7d10) fire damage and is stunned, or take half as much damage on a successful one and is not stunned. A stunned creature must make a DC 19 Wisdom saving throw at the end of its next turn. On a success, the creature is no longer stunned. On a failure, the creature is no longer stunned and its Intelligence and Charisma scores become 1 as if under the effects of the feeblemind spell.

Mind Spike (Costs 2 Actions). Stolas targets one creature he can see within 60 feet. The target must make a DC 18 saving throw or take 18 (4d8) psychic damage on a failed save, or half as much damage on a successful one. On a failed save, Stolas also always knows the target’s location for the next 24 hours, even if target and Stolas are on two different planes of existence.

This was a fun little creature to create. Hopefully, the art and the text have given you the same appreciate for Guy Davis’ artworks that I have. Be sure to check them out.

More cool stuff to come, as always, so be sure to sign up to get updates with the form on the right sidebar or down in the footer.