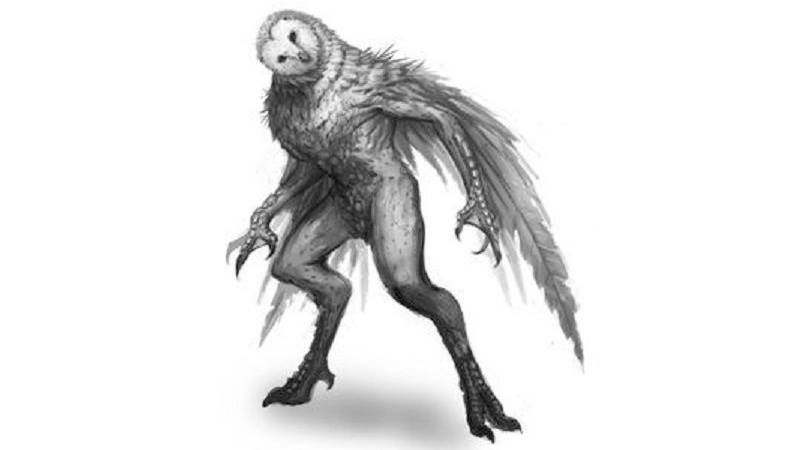 According to Mexican folklore, a lechuza is an old witch (or Bruja) who can turn herself into a monstrous black bird. They will prey on people who they think have done them wrong or they will steal children to use in their occult rituals. Some say that the lechuza has sold her soul to the devil in order to gain her powers.

Usually, the lechuza will appear as a large bird, the size of a human being. It can also appear as a creature with the body of a bird but the head of a hideous old woman.

They usually only come out at dusk or after nightfall. Many people in Mexico have spotted lechuzas flying high over the tops of houses or have seen it outlined against the moon at night.

If the lechuza fixates on you, it will sit outside your door at night, making crying sounds like a baby. If you go outside to investigate, it will swoop down on you and carry you away.

Shapechanger. The lechuza can use its action to polymorph into an owl-humanoid hybrid or into a giant owl, or back into its true form, which is humanoid. Its statistics, other than its size, are the same in each form. Any equipment it is wearing or carrying isn’t transformed. It reverts to its true form if it dies.

Flyby (Giant Owl or Hybrid Form Only). The lechuza doesn’t provoke opportunity attacks when it flies out of an enemy’s reach.

Keen Hearing and Sight. The lechuza has advantage on Wisdom (Perception) checks that rely on hearing or sight.

Multiattack (Humanoid or Hybrid Form Only). In humanoid form, the lechuza makes two club attacks or two shortbow attacks. In hybrid form, it can attack like a humanoid or make two talon attacks.

Talons (Giant Owl or Hybrid Form Only). Melee Weapon Attack: +3 to hit, reach 5 ft., one target. Hit: 8 (2d6 + 1) slashing damage. If the target is a humanoid, it must succeed on a DC 13 Constitution saving throw or be cursed with lechuza lycanthropy.

Reference page 207 of the Monster Manual for details on how players as lycanthropes function in Dungeons & Dragons Fifth Edition.