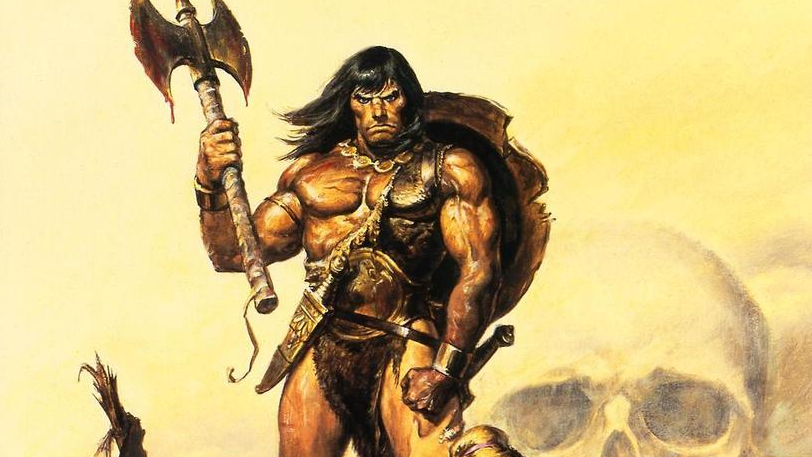 This article series details Sword and Sorcery in Fifth Edition and how you can implement it in your own games. It is also part of BroadSword Magazine, so if you are a subscriber and don’t wish to be spoiled, steer clear. In addition, this is not the final form of the content. Just the staging ground so I can start getting feedback on the material from Patreon and Reddit (similar to the way that WotC tests new material in their Unearthed Arcana series). Once I’ve done so, it will be removed from the site.

A battle-scarred barbarian and shaggy rogue descend into the massive hidden temple via the Soul Well. All they have to do is get past the cult and grab the Star Diamond before they are noticed. Unfortunately, the cult is in the middle of reviving one of the Ancient Ones, so their burglary may not be so simple.

Wading through the black waters of the Dead Swamp, the two warriors halt. The blind seer raises her hand and motions ahead. “There,” she whispers. Suddenly, a three-eyed,  froglike creature bursts from the shallow muck and attacks, instantly slaying one of the warriors. The other warrior tumbles backward and fumbles for his sword while he watches his companion being eaten.

A chill air slides through the crowd. Lightning crashes and the black clouds above boil. Mordrin the World Ender steps out onto the balcony laughing. Suddenly, every soldier below’s skin begins to welt and boil. They scream in agony as Modrin continues to cast his enchantment upon the army. Only the halfling hiding under the cast iron cooking pot is safe from Modrin’s evil spell.

Sword and Sorcery adventures pull from the classic works of fantasy fiction, sidestepping the modern Tolkeinesque vibe so many fantasy films and settings (including Fifth Edition) have today. Often, the worlds of Sword and Sorcery are dark worlds, toeing the line between horror and bronze age fantasy. Magic is rare and feared. The heroes are greedy and rarely driven by a better-nature. If divine magic exists, it’s dark and twisted, the clerics drawing their power from great old ones rather than benevolent deities.

How to run a Sword and Sorcery campaign.

Sword and sorcery campaigns use Fifth Edition rules like any other fantasy settings. However, if you want a true sword and sorcery setting, considering making the following adjustments to your setting:

The majority of races will be humans. Dwarves and halflings, while uncommon, are also reasonably additions and frequently met with extreme prejudice and racism. Elves and gnomes may exist, but they are odd and mysterious and feared. Half-orcs, tieflings, and dragonborn are considered evil races and should not be readily available for play in a Sword and Sorcery setting. If players insist on playing non-human races, drive home the point that they are most unwelcome in the world. And the more strange and alien those characters are, the more dangerous it is for them to reveal their true nature.

The primary classes of a sword and sorcery setting are barbarians, fighters, and rogues. Divine magic does not exist, therefore clerics and paladins are unavailable; there should be no healing magic in sword and sorcery settings. The same goes for those who pull magic from nature such as druids and rangers. Monks are mysterious and rare, as well, but not completely out of place in a sword and sorcery setting. Finally, the arcane casters are usually thought of as evil and should not be readily available for play. If they are, they are always feared and persecuted wherever they go, unless of course, they possess great power. Severely limit the use of classes that aren’t barbarians, fighters, or rogues. If a player does play a spellcasting class, reinforce the fear and awe that comes with the role. And tell them that they should be surprised if you burn their character at the stake.

Unlike the typical Fifth Edition high fantasy environments where magic is common and used in everyday activities, treat magic as a rare occurrence, one that can completely disrupt the course of a game. Spells are terrifying sights to behold. Unless they are seen as demi-gods, those who wield such power are feared and persecuted as consorts of devils and dark gods.

Religion is still a big part of sword and sorcery. However, the gods never involve themselves in the lives of mere mortals, but that doesn’t mean they don’t exist. Those who fraternize and draw power from deities are incredibly dangerous individuals and have more in common with Fifth Edition warlocks than they do clerics. And don’t forget: any ritual involving a deity almost never goes well.

Unforgiving forests, impassable mountains, deadly deserts, and dark swamps paint the harsh landscape of the sword and sorcery world. Even cities are full of danger with bandits in every alley and yellow-toothed guards who oppress and assault on a whim. Maps exist, but they are mostly unreliable. And since magic is uncommon, expect travel to be long and fraught with hazards.

The majority of those who rule in the lands of sword and sorcery are greedy and malicious dictators, petty governors, or merciless landlords. Whether it’s through harsh taxation or their black legions, these horrible despots care not for the plight of the common man. When they are finally defeated, it’s only by the hand of a stronger–and often even more cruel!–man or woman who may even be worse than those whom they supplanted.

Magic items are incredibly rare in sword and sorcery worlds. Even the most mundane, uncommon item can empower its wielder. The more rare it is, the more dangerous it is to possess. Treat all magic items in your campaign as if it were an artifact and consider giving them beneficial and detrimental traits to match.

In most Fifth Edition adventures, death is taken as a minor setback. But in a sword and sorcery world, death isn’t just permanent, it’s common, too. If you want to truly make your sword and sorcery world scary and full of danger, tie in the following rules options from the DMG: slow natural healing, gritty realism, and lingering injuries. These optional rules may slow down your campaign some, but it forces your characters to make wise decisions. Plus, it greatly cuts down on rampant “murder-hoboism.”

Next: New Subclasses for Sword and Sorcery Campaigns