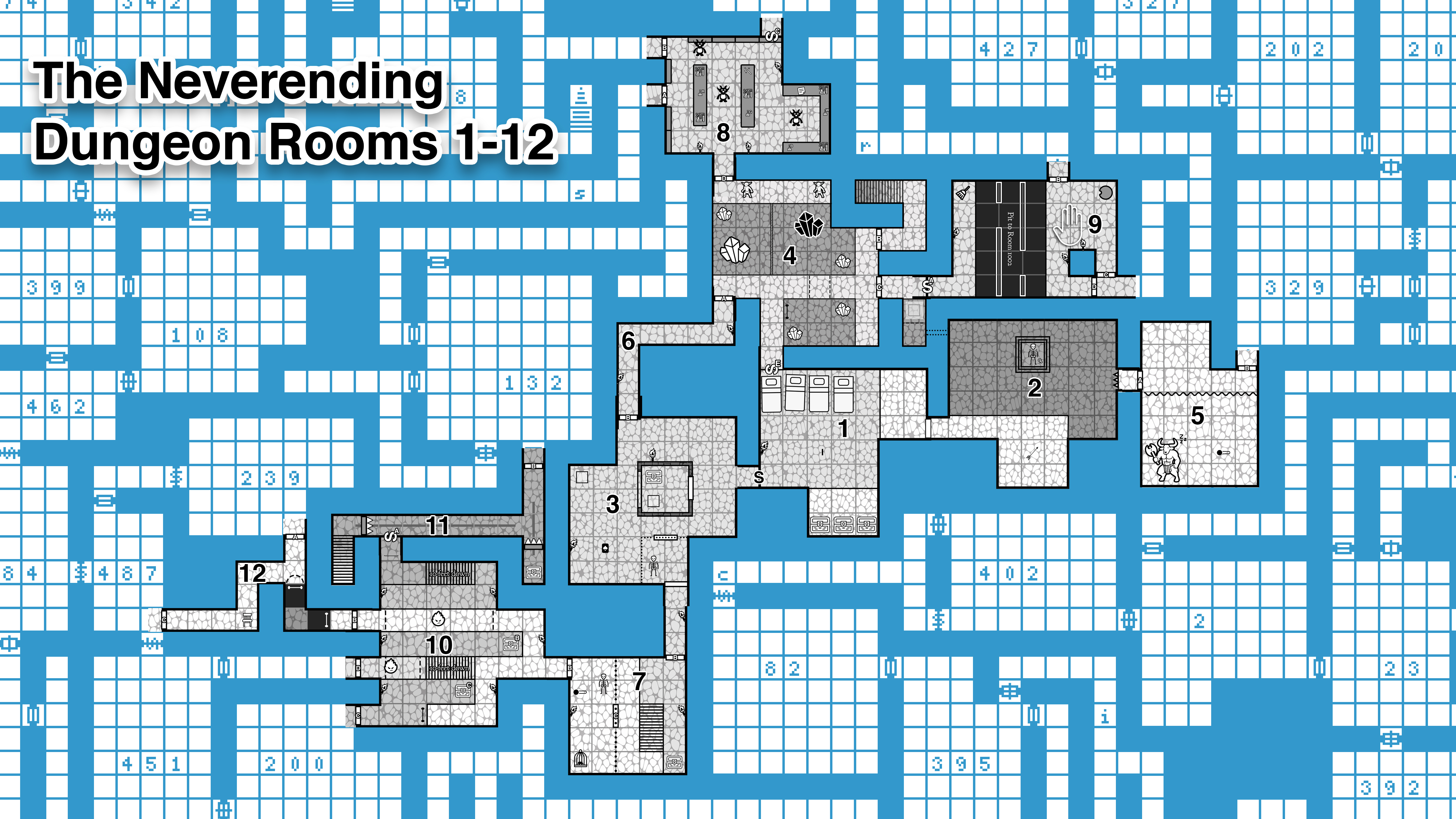 Welcome to the Neverending Dungeon! The adventure starts when characters wake in a dungeon with no recollection of how they got there. Each room of the dungeon is loaded with traps, monsters, puzzles, treasure, and more. As time goes on, I’ll create more and more rooms, building out at least one room per week plus an additional room for every 10 patrons that follow my Patreon account.

You are free to play the dungeon as it lies, or you can take the individual puzzles, traps, and room layouts and use them in your own designs. It’s totally up to you.

This unusually shaped corridor has four major bends. On the eastern side, there is a large pit at the first elbow. At the center of the pit is a platform that’s 40-feet down from the ledges. Fortunately, there appear to be two ladders that lower a climber down to the level of the platform. Unfortunately, the climber will still have to jump from the ladder to the platform and vice versa.

These are the points-of-interest in this room.

Chair. It’s just a chair. It’s likely your characters will still fill it with arrows, though.

Ladder. While it appears that there are two ladders in the room. The easternmost ladder is real. However, the opposite ladder (the northside of the pit) is actually a mimic’s pseudopod (see below). If a creature leaps and catches the ladder (see platform below), they automatically become stuck to the mimic’s adhesive. From there, the mimic reels the creature in.

Mimic. A nasty mimic has taken on the form of part of the ledge and the ladder north of the pit. It patiently waits for someone to use its ladder so it can attack. While the mimic’s pseudopod is extended into a false ladder, it can’t attack with its pseudopod. Instead, it can use its action to reel its ladder in—along with any creatures stuck to it—at a rate of 15 feet per round. If a creature becomes unstuck to the mimic while it is dangling, there is a chance that it could fall into the pit. When this happens, the creature must immediately make a DC 15 Strength saving throw to push off the wall and land on the platform behind it. If the creature is 20 feet or more above the platform, it makes the check with advantage. Failure results in the creature falling down the pit.

Pit. The pit is 200 feet deep, depositing anyone who falls into one in room 1003 below. A creature that falls takes 1d6 falling damage for every 10 feet they fall (to a maximum of 20d6).

Platform. The platform at the center of the pit is 40-feet below the upper ledges. A creature can attempt to leap from the top of the platform with a Strength (Athletics) check. How much damage the creature takes (if any at all) depends on the result of the check.

A creature can also leap from the bottom of one of the ladders (see above) to the platform. Remember that because the leaper won’t be able to make a running jump, the distance they cover is only half their Strength score.

If a creature leaps from the platform to the bottom of one of the ladders, they must make a DC 10 Dexterity (Acrobatics) check in order to do it. If the check fails, the creature misses the rungs and falls into the pit below.

Warning. On the north wall just by Door C, someone painted the words “Danger… Mimic Ahead!” on the wall.

These are the ways in and out of Room 12.

Door A. Basic wooden door, simple lock (skull). There is a skull emblem on the door.

Door B. Basic wooden door, simple lock (skull). There is a skull emblem on the door.

Door C. Basic wooden door, unlocked. Any creature that touches the door is sprayed with owlbear pheromones from a nozzle over the door. A DC 10 Wisdom (Perception) check notices the nozzle. From there, it’s easy to disarm, requiring no check. Until the sprayed creature cleans itself off, it smells strongly of animal musk. A DC 13 Wisdom (Nature) check immediately identifies the smell.

Pit. A creature who falls into the pit or willingly jumps into it lands 200-feet below in Room 1003.

Get the other 11 rooms in one cohesive document.

For only $1 per month, you can subscribe to the Neverending Dungeon and get all 12 rooms and the supplement on Patreon. And if you do $3 per month, you get an additional 95+ PDFs.

Or, you know, you could go spend $3 on a grande cup of plain black coffee at Starbucks.