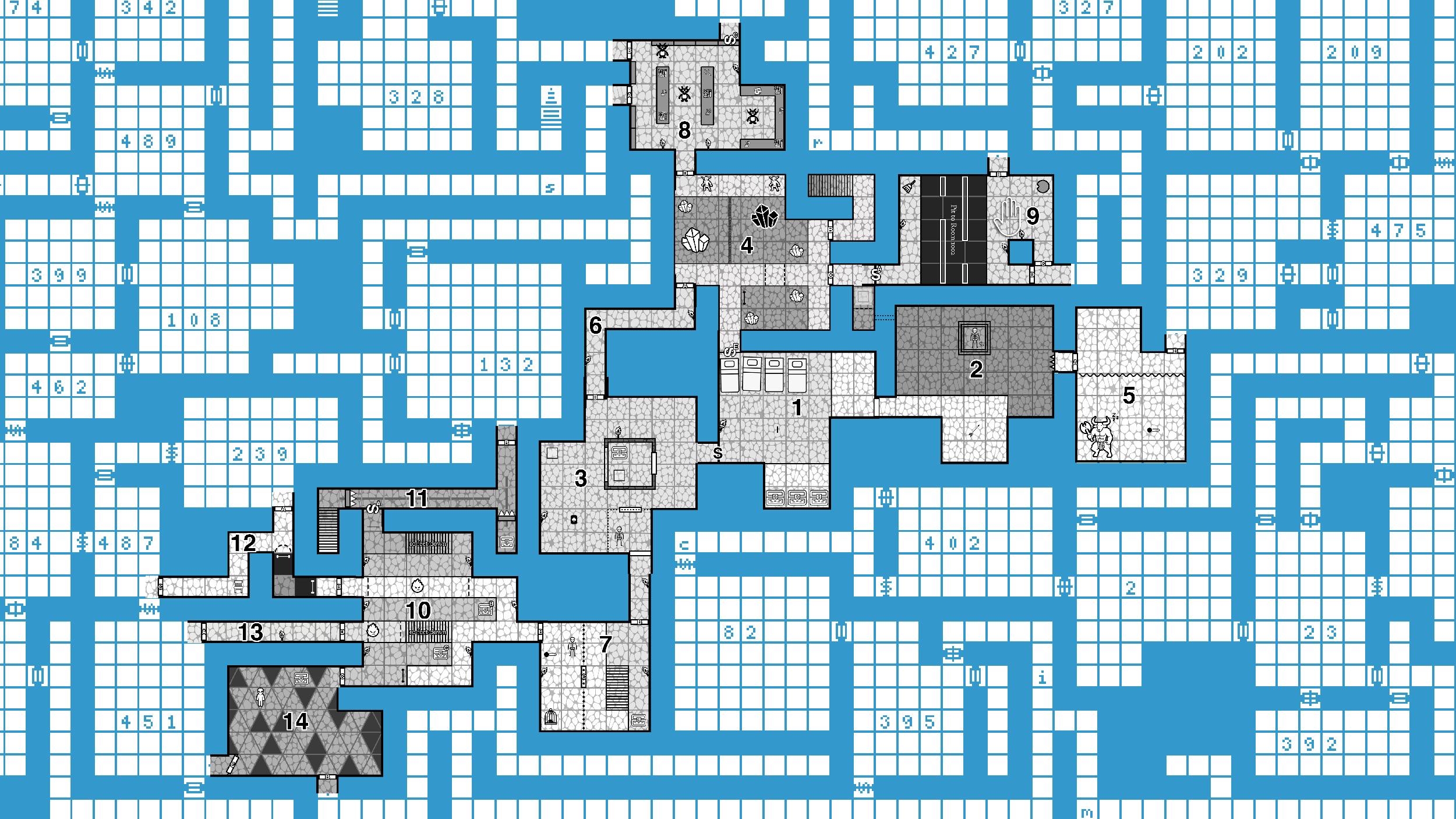 The first time the characters enter this room, read the following:

You come face-to-face with: yourself! Or so it seems. Clearly, it’s a mirror reflection of you and your companions. And from the looks of it, you’ve entered a hall of mirrors.

This room is laid out a little differently than most of the Neverending Dungeon’s rooms. Instead of squares for space, there are triangles. The reason for this is how light works with mirrors and mirror mazes, requiring equilateral triangles to constantly reflect images to create the maze’s illusion.

Do not reveal the map to the players. Instead, explain that they find their own way through the mirror maze, or go back the way they came.

When a creature moves, they must do so triangle by triangle. If the creature hits a mirror (the dark grey triangles on the map above), they must make a DC 10 Constitution saving throw. On a failed saving throw, the creature smacks into a mirror, taking 1 bludgeoning damage and lose 5 feet of movement for the round. On a successful saving throw, the creature takes no damage and can move normally. At the start of a creature’s turn, it can opt to move slowly through the maze. If it does so, it can see where the mirrors are located. However, it can only move at half its normal move speed (including if it uses the Dash action).

There is no way to determine whether or not a creature is at the center of the maze or not. However, creatures with spells or abilities that allow them to find their way when they are lost (such as the find a path spell or a ranger’s favored terrain features) let the creature know its position relative to the door it originally entered. A creature can use its action to make a DC 15 Intelligence check. On a successful check, the creature can move towards the door it entered or towards a creature or object that it can detect (such as a colleague, a monster, or even the treasure chest). The creature must still move carefully through the maze to avoid smacking against a mirror—they’re smart, but that doesn’t mean they’re careful, too.

A creature that can sense its way without using sight (such as with the blindsight sense) can automatically find its way through the maze, requiring no checks to do so.

In addition to the maze itself, these are the special features of this room.

Breaking Mirrors. The characters may get the wild idea to break the mirrors in order to navigate the maze better. Unfortunately, each triangular block of mirrors contains a cloud of gas within. The cloud of gas fills a 10-foot cube directly in front of the broken mirror. The gas spreads around corners. Any creature in the area when the mirror is broken or starts their turn in the gas’ area must make a DC 12 Constitution saving throw. On a failed saving throw, the creature is poisoned. While poisoned, the creature is struck with overwhelming joy. It acts indifferent to all dangers and makes all of its initiative rolls and saving throws with disadvantage. The creature can repeat its Constitution saving throw at the end of a long rest ending the effect on itself with a success. Otherwise, the poisoned effect continues. Each time the creature repeats its saving throw, including after the first long rest, it gains a cumulative +1 bonus to the saving throw.

The gas disperses after 1 round.

Doppelganger. A clever doppelganger wearing clothing similar to those the characters found themselves in after waking in Room 1 uses its Shapechanger feature to assume the appearance of one of the characters. To make matters worse, it uses its Read Thoughts ability so that it can perfectly mimic the actions of the creature it is duplicating. A creature can use its action to make a DC 14 Intelligence (Investigation) check to spot the doppelganger. Otherwise, the doppelganger is effectively invisible until it attacks or does something different than the creature it is mimicking. (A doppelganger that attacks without being noticed first does so with surprise.)

Treasure Chest. There is a treasure chest hidden in the maze. However, it appears to be everywhere. If the characters manage to find it, it is unlocked and untrapped. Within the chest are four suits of leather armor and four short swords.

These are the exits from the maze.

Door A. Basic wooden door, unlocked. The reverse side of this door has a mirror on it. A handhold built into the frame makes opening it possible. While the door is locked from the opposite side, it is unlocked from this side. It’s simply a matter of finding it.

Doors B and C. Special doors, unlocked. Both doors B and C have a silent illusion cast upon them to make it look like a clear path through the mirror maze (and not a dead-end or door). If a creature cannot see through the illusion and runs into it, they are instantly teleported to the corresponding teleport space on the map (Door B teleports to Teleport B, etc.). As far as the creature is concerned, it’s as if they continued on their way and were never teleported at all. Any creature that is proficient in Arcana will immediately sense something strange. Have the creature make a DC 13 Intelligence saving throw.

If the creature fails its saving throw, it gets the sense that there is magic at work in the maze, but isn’t sure exactly how.

If the creature succeeds on its saving throw, it realizes that it was teleported. The next time the creature comes within 5 feet of one of the doors that it has teleported through, have them make another DC 13 Intelligence saving throw. If this second saving throw is successful, they immediately recognize that the door is an illusion and that touching it causes a creature to teleport to another part of the maze. From there, they can make a DC 13 Intelligence (Investigation) check to disbelieve the illusion revealing the door behind it.

Get the Rest of the Neverending Dungeon!

Want to get all 14 rooms of the Neverending Dungeon plus all the new ones that come out regularly in a cohesive PDF? It’s only $1 per month! That’s it!