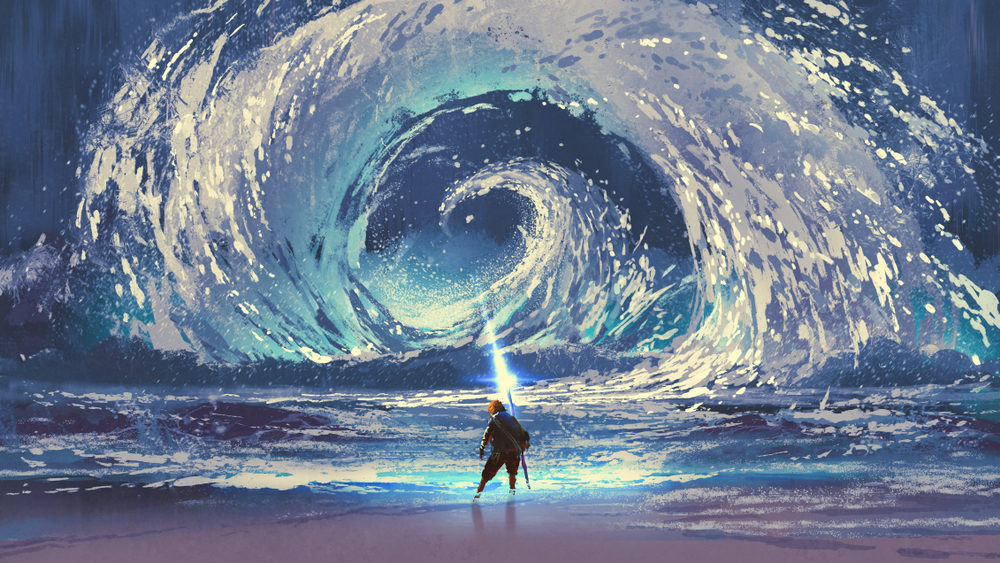 Doctor Piersym is a lawful evil male human noble with the Mad Scientist Boost (see below). He is the creator of the Tempusfuge and hopes to study its power. He also creates the flesh golems that protect the Storm Lady’s Maze. While loyal to the Storm Lady, he would quickly switch sides if he felt endangered by his relationship with her.

The creature is a mad scientist, capable of creating fascinating (and often gruesome) inventions. It gains the following benefits:

Bove is the Storm Lady’s right-hand minotaur who travels through the different stages of the Maze to ensure that none of its prisoners come close to solving its riddle. In addition to the stats normal for a minotaur, Bove is usually under the effects of a potion of lightning resistance. He also has wields the storm sickle.

This sickle sparks with electricity as beads of water form and drip from its blade. You can make a ranged attack with this weapon instead of a melee one whenever you take the Attack action by slashing through the air to send out a blade of storming wind. Ranged attacks with the sickle use Strength as your modifier for its attack and damage rolls and have a normal range of 20 feet and a long range of 60 feet. Any target hit by an attack from the sickle takes an extra 1d4 lightning damage.

The Storm Lady is a high-level Storm Sorceress who uses her power to fuel her maze and the Tempusfuge within. Because of her connection to the Tempusfuge, she is effectively immortal.

Ideal. “Born of lightning and thunder, I am power incarnate. None can defeat me.”

Bond. “The Tempusfuge is the source of my power. I will kill any who seek to unlock its secrets.”

Flaw. “I have grown lax over the years and do not recognize true threats when they appear.”

Special Equipment. The storm lady wears the Timeshifter’s Mantle. Its effects are included in her reactions.

Tempestuous Magic. Immediately before or after the Storm Lady casts a spell of 1st level or higher, she can use her bonus action to fly up to 10 feet without provoking attacks of opportunity.

Empowered Spell. When she rolls damage for a spell, she can spend 1 sorcery point to reroll up to 5 damage dice. She must use the new rolls. She can use this option even if she has already used a different option during the casting of the spell.

Heightened Spell. When she casts a spell that forces a creature to make a saving throw to resist its effects, she can spend 3 sorcery points to give one target of the spell disadvantage on its first saving throw made against the spell.

Quickened Spell. When she casts a spell that has a casting time of 1 action, she can spend 2 sorcery points to change the casting time to 1 bonus action for this casting.

Spellcasting. The Storm Lady is a 14th-level spellcaster. Her spellcasting ability is Charisma (spell save DC 16, +8 to hit with spell attacks). She has the following sorcerer spells prepared:

Ice Breath (1/Short Long Rest). The Storm Lady emits a breath of freezing air in a 15 ft. cone. Each creature in the area must make a DC 14 Constitution saving throw, taking 14 (4d6) cold damage on a failed saving throw, and half as much damage on a successful one.

Storm’s Fury. When the Storm Lady is hit by a melee attack, she can use her reaction to deal 14 lightning damage ot the attacker, and the attack must make a DC 16 Strength saving throw. On a failed save, the attacker is pushed in a straight line up to 20 feet away from her.

Timeshifter’s Mantle (1/Day). If a Large or smaller creature hits the Storm Lady with a melee attack while she is wearing the Timeshifter’s Mantle, she can use her reaction to cause time to briefly warp around her. After taking the damage from the attack, the Storm Lady can immediately move up to half her speed without provoking opportunity attacks, and the attacking creature’s speed is reduced to 0 until the start of its next turn.

Get the PDF of these monsters plus the adventure

Doctor Piersym, Bove, and The Storm Lady are the antagonists in the adventure Maze of the Storm Lady. You can get a PDF for all three villains plus details of their magic items when you become a DMDave patron. In addition, there are two more NPCs included plus some more of the Monster boosts.